A rich variety of meteorological phenomena take place in the extensive hydrogen atmosphere of the planet Saturn, a world about ten times the size of the Earth. They help us to better understand those that operate in a similar way in the Earth's atmosphere. Featuring among them due to its uniqueness is the well-known "hexagon", an amazing wave structure that surrounds the planet's polar region and whose shape looks as if it had been drawn by a geometrician. 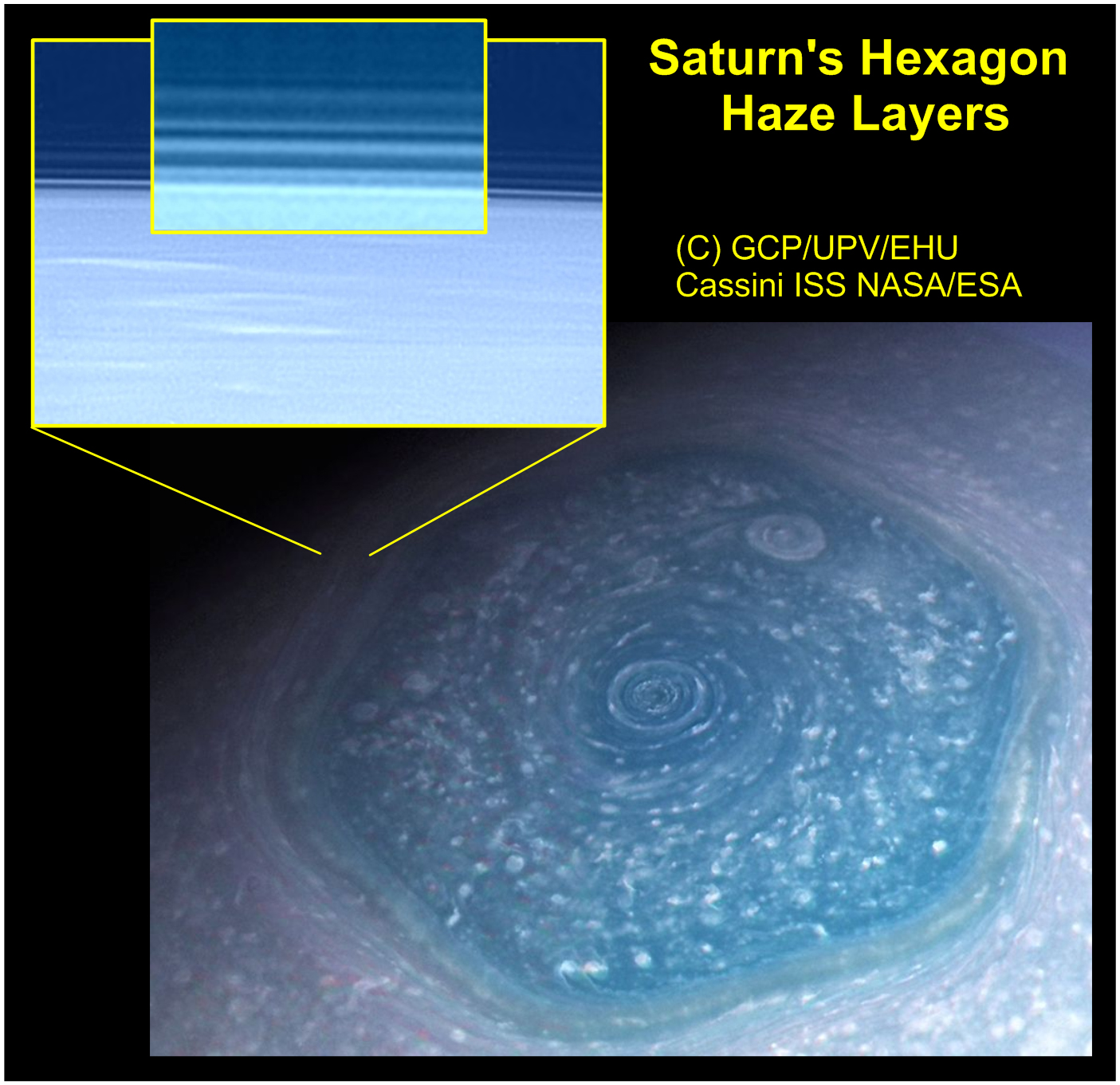 Discovered in 1980 by NASA's Voyager 1 and 2 spacecraft, it has been observed without interruption since then, despite the planet's long, strong cycle of seasons. A fast, narrow jet stream flows inside this gigantic planetary wave where winds reach maximum speeds of about 400 km/h. Yet, strangely enough, the wave itself remains almost static; in other words, it barely shifts with respect to the planet's rotation. All these properties mean that the "hexagon" is a highly attractive phenomenon for meteorologists and planet atmosphere researchers.

Cassini, which was in orbit around the planet between 2004 and 2017, took a vast quantity of images from a whole range of distances from the planet and viewing angles. In June 2015 its main camera obtained very high-resolution images of the planet's limb which are capable of solving details of between 1 and 2 km; they captured the hazes located above the clouds that shape the hexagonal wave. In addition, it used many colour filters, from ultraviolet to near infrared, thus enabling the composition of these hazes to be studied.

To complete this study, images produced by the Hubble Space Telescope taken 15 days later and showing the hexagon not on the limb but seen from above were also used. "The Cassini images have enabled us to discover that, just as if a sandwich had been formed, the hexagon has a multi-layered system of at least seven mists that extend from the summit of its clouds to an altitude of more than 300 km above them," said Professor Agustín Sánchez-Lavega, who led the study. "Other cold worlds, such as Saturn's satellite Titan or the dwarf planet Pluto, also have layers of hazes, but not in such numbers nor as regularly spaced out".

The vertical extent of each haze layer is between approximately 7 and 18 km thick, and according to the spectral analysis, they contain minute particles with radii of the order of 1 micron. Their chemical composition is exotic for us, because, owing to the low temperatures in Saturn's atmosphere ranging between 120° C and 180° C below zero, they could comprise hydrocarbon ice crystallites, such as acetylene, propyne, propane, diacetylene or even butane in the case of the highest clouds.

Another aspect studied by the team is the regularity in the vertical distribution of the hazes. The hypothesis put forward is that the hazes are organised by the vertical propagation of gravity waves that produce oscillations in the density and temperature of the atmosphere, a well-known phenomenon on the Earth and on other planets. The researchers raise the possibility that it could be the very dynamics of the hexagon itself and its powerful jet stream that may be responsible for the formation of these gravity waves. On the Earth, too, waves of this type produced by the undulating jet stream travelling at speeds of 100 km/h from West to East in the mid-latitudes have been observed. The phenomenon could be similar on both planets, even though the peculiarities of Saturn mean that it is the only case in the solar system. This is an aspect that remains subject to future research.

Agustín Sánchez-Lavega is professor of physics at the UPV/EHU-University of the Basque Country, head of the GCP-Planetary Science Group and holder of the 2016 Euskadi Award for Research. Teresa del Río-Gaztelurrutia and Ricardo Hueso are tenured lecturers, and Santiago Pérez-Hoyos is a permanent research doctor; they all belong to the GCP.

Contacts and sources:
Matxalen Sotillo
University of the Basque Country