In February and July of 2019, the Hayabusa2 spacecraft briefly touched down on the surface of near-Earth asteroid Ryugu. The readings it took with various instruments at those times have given researchers insight into the physical and chemical properties of the 1-kilometer-wide asteroid. These findings could help explain the history of Ryugu and other asteroids, as well as the solar system at large.

When our solar system formed around 5 billion years ago, most of the material it formed from became the sun, and a fraction of a percent became the planets and solid bodies, including asteroids. Planets have changed a lot since the early days of the solar system due to geological processes, chemical changes, bombardments and more. But asteroids have remained more or less the same as they are too small to experience those things, and are therefore useful for researchers who investigate the early solar system and our origins.

“I believe knowledge of the evolutionary processes of asteroids and planets are essential to understand the origins of the Earth and life itself,” said Associate Professor Tomokatsu Morota from the Department of Earth and Planetary Science at the University of Tokyo. “Asteroid Ryugu presents an amazing opportunity to learn more about this as it is relatively close to home, so Hayabusa2 could make a return journey relatively easily.”

Hayabusa2 launched in December 2014 and reached Ryugu in June 2018. At the time of writing, Hayabusa2 is on its way back to Earth and is scheduled to deliver a payload in December 2020. This payload consists of small samples of surface material from Ryugu collected during two touchdowns in February and July of 2019. Researchers will learn much from the direct study of this material, but even before it reaches us, Hayabusa2 helped researchers to investigate the physical and chemical makeup of Ryugu.


“We used Hayabusa2’s ONC-W1 and ONC-T imaging instruments to look at dusty matter kicked up by the spacecraft’s engines during the touchdowns,” said Morota. “We discovered large amounts of very fine grains of dark-red colored minerals. These were produced by solar heating, suggesting at some point Ryugu must have passed close by the sun.”

Morota and his team investigated the spatial distribution of the dark-red matter around Ryugu as well as its spectra or light signature. The strong presence of the material around specific latitudes corresponded to the areas that would have received the most solar radiation in the asteroid’s past; hence, the belief that Ryugu must have passed by the sun.

“From previous studies we know Ryugu is carbon-rich and contains hydrated minerals and organic molecules. We wanted to know how solar heating chemically changed these molecules,” said Morota. “Our theories about solar heating could change what we know of orbital dynamics of asteroids in the solar system. This in turn alters our knowledge of broader solar system history, including factors that may have affected the early Earth.”

History of Ryugu. A diagram to show how researchers believe the surface of Ryugu evolved over time 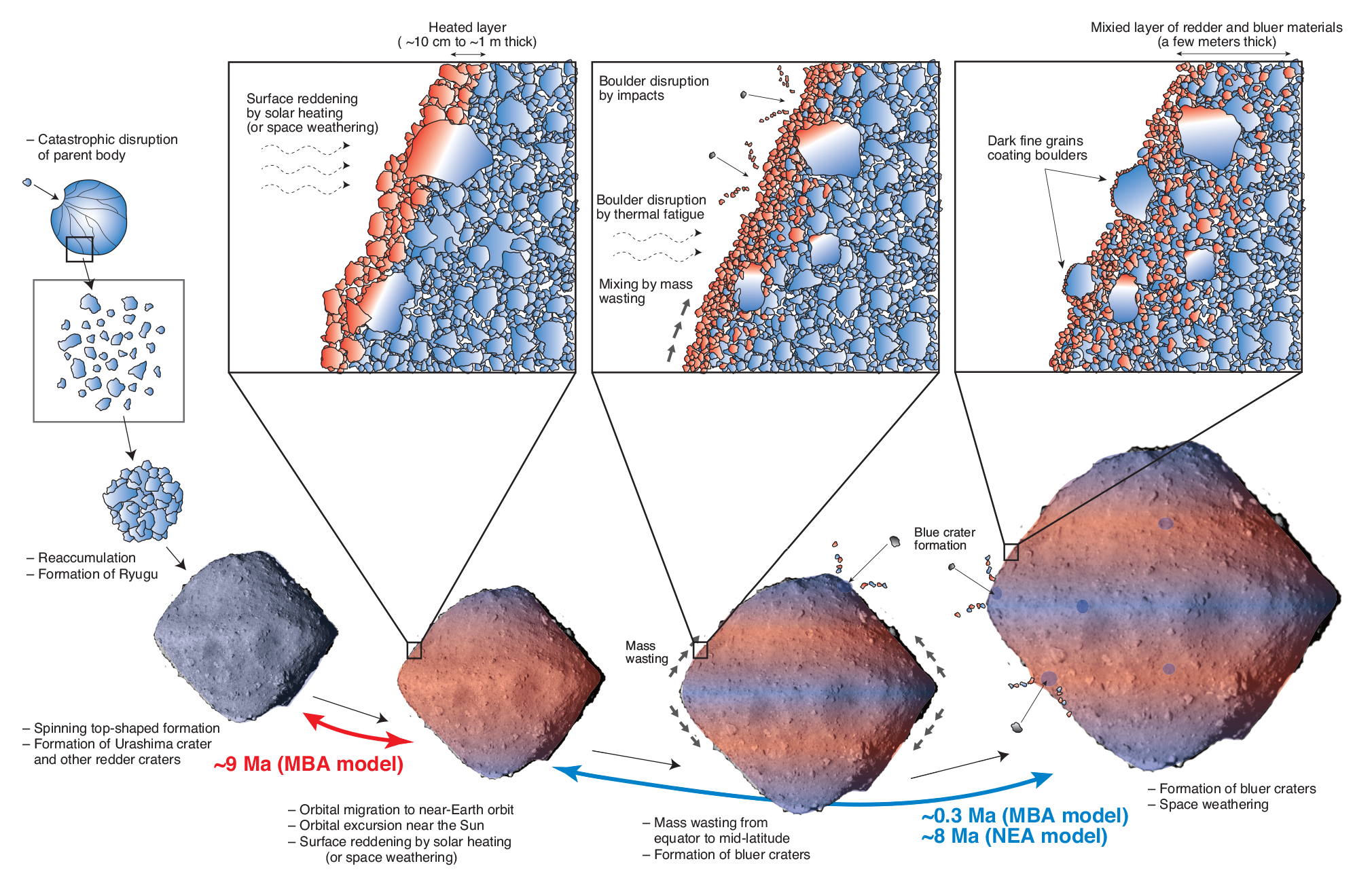 When Hayabusa2 delivers material it collected during both touchdowns, researchers will unlock even more secrets of our solar history. Based on spectral readings and albedo, or reflectivity, from within the touchdown sites, researchers are confident that both dark-red solar-heated material and gray unheated material were collected by Hayabusa2. Morota and his team hope to study larger properties of Ryugu, such as its many craters and boulders.

“I wish to study the statistics of Ryugu’s surface craters to better understand the strength characteristics of its rocks, and history of small impacts it may have received,” said Morota. “The craters and boulders on Ryugu meant there were limited safe landing locations for Hayabusa2. Finding a suitable location was hard work and the eventual first successful touchdown was one of the most exciting events of my life.”

Contacts and sources:
University of Tokyo