Migration Patterns Reveal an Eden for Ancient Humans and Animals

Pinnacle Point, a series of archaeological sites that overlook a now submerged section of South Africa’s coastline and one of the world’s most important localities for the study of modern human origins, was as much of an Eden for animals as it was for early humans. Jamie Hodgkins, PhD, assistant professor of anthropology at University of Colorado Denver, and her team drilled ancient herbivore teeth to find that many local animals stayed put in the ecologically rich ecosystem, which may explain why humans flourished there, too.

Their study was published in a Quaternary Science Reviews special issue: The Palaeo-Agulhas Plain: a lost world and extinct ecosystem this month.

Home to the Earliest Modern Humans

An artist rendering of the Palaeo-Agulhas Plain during the Pleistocene 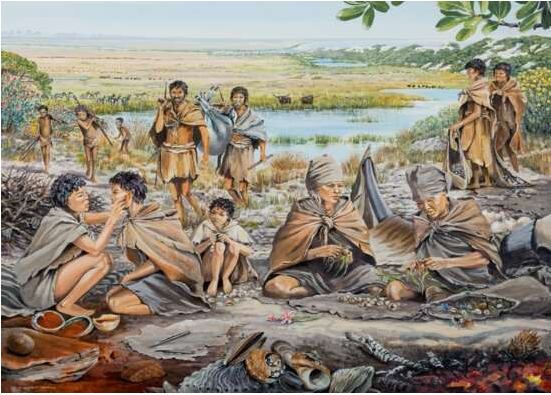 Home to some of the richest evidence for the behavior and culture of the earliest clearly modern humans, the submerged shelf called the Palaeo-Agulhas Plain (PAP) once formed its own ecosystem. Co-author Curtis Marean, PhD, Arizona State University, has worked with teams of scientists for decades to reconstruct the locale back into the Pleistocene, the time period that spanned from 2.6 million to 11,700 years ago.

In this study, the researchers looked specifically at antelope migratory patterns at Pinnacle Point. This series of cave sites that sit on the modern South African coast offers archaeological materials from humans who were living and hunting there back to 170,000 years ago.

“During glacial cycles, the coastal shelf was exposed,” said Hodgkins. “There would have been a huge amount of land in front of the cave sites. We thought it was likely that humans and carnivores were hunting animals as they migrated east and west over the exposed shelve.”
A Lack of Migratory Pattern

Hodgkins and her team wanted to understand those migratory patterns. They studied the carbon and oxygen isotopes within the tooth enamel of many large herbivores, including Redunca, or reedbuck, a nonmigratory antelope. Tooth enamel can reveal a pattern of migration by tracking changing levels of carbon from the plants an animal eats as its teeth grow.

In general, wetter, cooler environments are home to C3 plants; hotter, drier environments are home to C4 plants. Animals like lush vegetation, which means they tend to follow the rain patterns: in this case east for summer rain (C4 grasses), and west for winter rain (C3 grasses). If animals were migrating between summer and winter rainfall zones, their tooth enamel would register that annual C3 and C4 plant rotation as a sinusoidal curve as their teeth grew.

A) Map of South Africa (SA) showing the distribution of C4 grasses associated with the percentage of summer rain from east to west along the coast, and with the winter rainfall zone in the west (modified from Vogel, 1978); B) A map of SA showing the area of the Greater Cape Floristic Region with the expanded PAP and hypothesized animals migration (i.e. It is hypothesized that animals would have been undertaking long distance migrations between the east coast in summer rainfall zone and west coast in the winter rainfall zone) 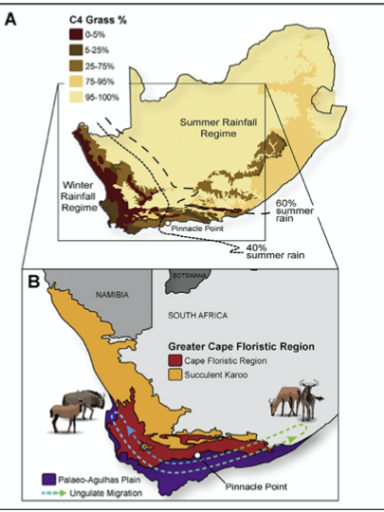 But when Hodgkins and her team used the nonmigratory reedbuck as their control animal, they found that the enamel from its typically migratory pals—like the wildebeest, hartebeest, and springbok—showed no discernible migratory pattern. Most animals seemed happy right where they were.

“They weren’t struggling at Pinnacle Point,” says Hodgkins. “We now know that powerful river systems supplied the expanded coast, thus animals didn’t have to be migratory. It was a great location, resource-wise. During interglacials when the coast moved closer to the caves humans had shellfish and other marine resources, and when the coast expanded in glacial times hunters had access to a rich, terrestrial environment. Hunters wouldn’t need to be as mobile with all of these herbivores wandering around.”

Thriving in a Ecogeological Haven

Hodgkins’ team’s findings of this prehistoric Eden echoed another recent discovery. Seventy-four-thousand years ago, one of Earth’s largest known eruptions at Mount Toba in Sumatra, Indonesia, created a global winter, causing population crashes. In 2018, researchers from Marean’s group found that humans at Pinnacle Point not only survived, but thrived in the haven. 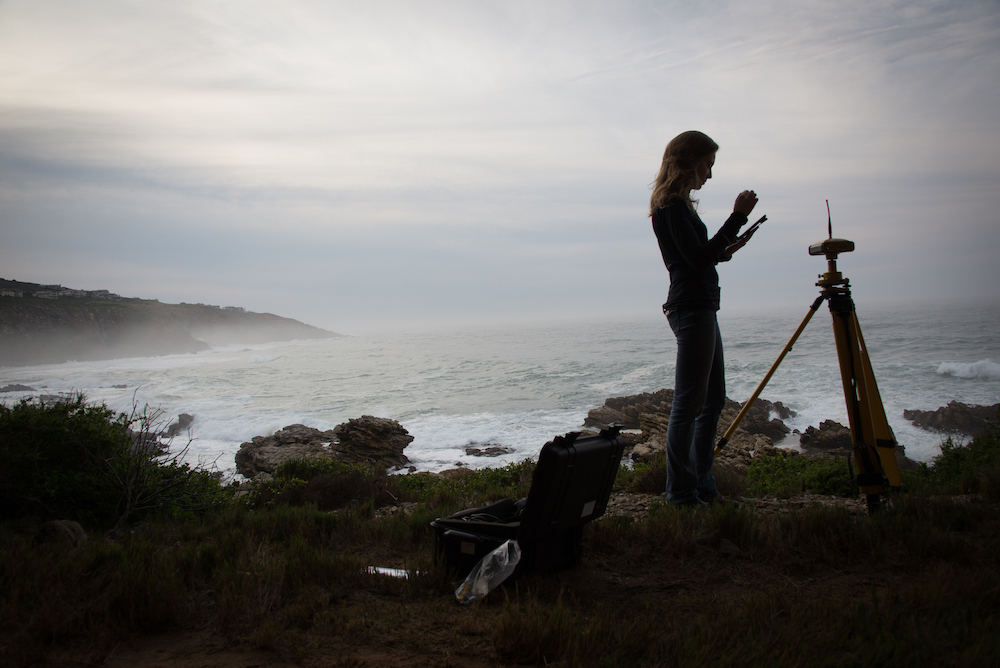 Hodgkins says this is just a first attempt at using isotopic data to test the hypothesis of east and west migration patterns at these sites and further research will be done.

“It is quite possible that animal migration patterns changed as the coastline moved in and out during glacial and interglacial cycles,” said Hodgkins.

Funders for this project include the National Science Foundation, the Hyde Family Foundations, and the John Templeton Foundation at the Institute of Human Origins (IHO) at Arizona State University.