‘Jurassic Park’ Got It Wrong: Raptors Don’t Hunt in Packs

Turns out, you really can’t believe everything you see in the movies.

A new University of Wisconsin Oshkosh analysis of raptor teeth published in the peer-reviewed journal Palaeogeography, Palaeoclimatology, Palaeoecology shows that Velociraptors and their kin likely did not hunt in big, coordinated packs like dogs.

The raptors (Deinonychus antirrhopus) with their sickle-shaped talons were made famous in the 1993 blockbuster movie Jurassic Park, which portrayed them as highly intelligent, apex predators that worked in groups to hunt large prey.

“Raptorial dinosaurs often are shown as hunting in packs similar to wolves,” said Joseph Frederickson, a vertebrate paleontologist and director of the Weis Earth Science Museum on the UWO Fox Cities campus. “The evidence for this behavior, however, is not altogether convincing. Since we can’t watch these dinosaurs hunt in person, we must use indirect methods to determine their behavior in life.”

Frederickson led the study in partnership with two colleagues at the University of Oklahoma and Sam Noble Museum, Michael Engel and Richard Cifell.

“The problem with this idea is that living dinosaurs (birds) and their relatives (crocodilians) do not usually hunt in groups and rarely ever hunt prey larger than themselves,” he explained.

“Further, behavior like pack hunting does not fossilize so we can’t directly test whether the animals actually worked together to hunt prey.”

Recently, scientists have proposed a different model for behavior in raptors that is thought to be more like Komodo dragons or crocodiles, in which individuals may attack the same animal but cooperation is limited.

“We proposed in this study that there is a correlation between pack hunting and the diet of animals as they grow,” Frederickson said.

In Komodo dragons, babies are at risk of being eaten by adults, so they take refuge in trees, where they find a wealth of food unavailable to their larger ground-dwelling parents. Animals that hunt in packs do not generally show this dietary diversity.

“If we can look at the diet of young raptors versus old raptors, we can come up with a hypothesis for whether they hunted in groups,” Frederickson said.

To do this, the scientists considered the chemistry of teeth from the raptor Deinonychus, which lived in North America during the Cretaceous Period about 115 to 108 million years ago.

“Stable isotopes of carbon and oxygen were used to get an idea of diet and water sources for these animals. We also looked at a crocodilian and an herbivorous dinosaur from the same geologic formation,” he said.

The scientists found that the Cretaceous crocodilians, like modern species, show a difference in diet between the smallest and largest teeth, indicating a distinct transition in diet as they grew.

“This is what we would expect for an animal where the parents do not provide food for their young,” Frederickson said. “We also see the same pattern in the raptors, where the smallest teeth and the large teeth do not have the same average carbon isotope values, indicating they were eating different foods. This means the young were not being fed by the adults, which is why we believe Jurassic Park was wrong about raptor behavior.” 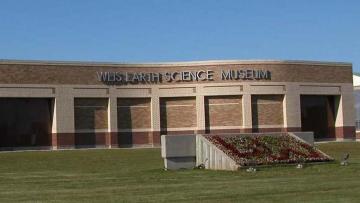 Frederickson added that the method used in this study to analyze carbon in teeth could be applied to see whether other extinct creatures may have hunted in packs.

Before joining UWO in July 2019, Frederickson most recently served as an assistant professor at Southwestern Oklahoma State University. He also was founder/manager of Oklahoma Educators Evolve!, an outreach and educational organization that trains science teachers across five states through field and museum-based geology experiences.