Inspired by the biomechanics of cheetahs, researchers have developed a new type of soft robot that is capable of moving more quickly on solid surfaces or in the water than previous generations of soft robots. The new soft robotics are also capable of grabbing objects delicately – or with sufficient strength to lift heavy objects. 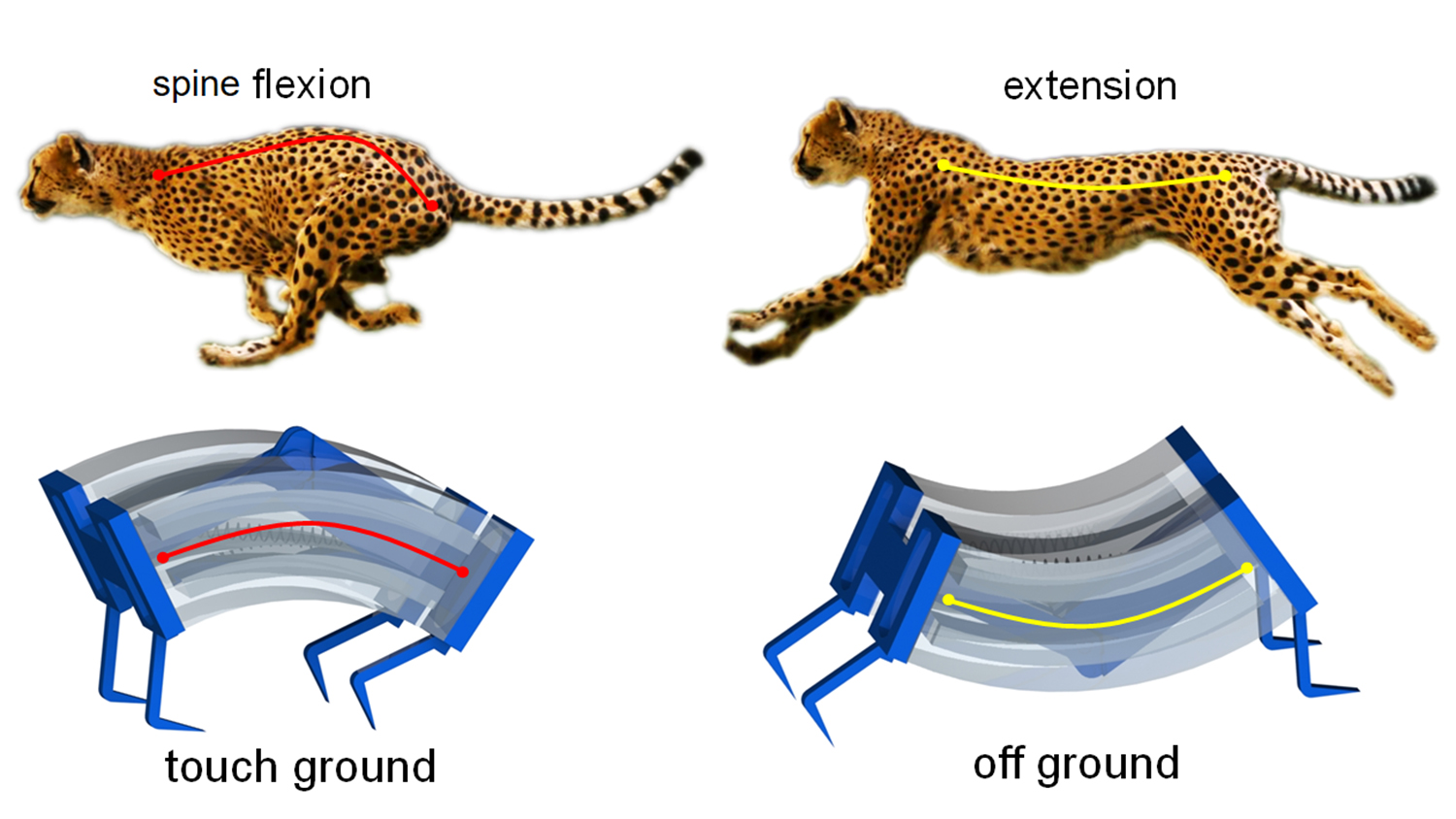 
“Cheetahs are the fastest creatures on land, and they derive their speed and power from the flexing of their spines,” says Jie Yin, an assistant professor of mechanical and aerospace engineering at North Carolina State University and corresponding author of a paper on the new soft robots.

“We were inspired by the cheetah to create a type of soft robot that has a spring-powered, ‘bistable’ spine, meaning that the robot has two stable states,” Yin says. “We can switch between these stable states rapidly by pumping air into channels that line the soft, silicone robot. Switching between the two states releases a significant amount of energy, allowing the robot to quickly exert force against the ground. This enables the robot to gallop across the surface, meaning that its feet leave the ground.

“Previous soft robots were crawlers, remaining in contact with the ground at all times. This limits their speed.”

The fastest soft robots until now could move at speeds of up to 0.8 body lengths per second on flat, solid surfaces. The new class of soft robots, which are called “Leveraging Elastic instabilities for Amplified Performance” (LEAP), are able to reach speeds of up to 2.7 body lengths per second – more than three times faster – at a low actuation frequency of about 3Hz. These new robots are also capable of running up steep inclines, which can be challenging or impossible for soft robots that exert less force against the ground.

Video of the LEAP robot in action
Credit: NCState https://youtu.be/Z5QAwAOxORo.

These “galloping” LEAP robots are approximately 7 centimeters long and weigh about 45 grams.

“We also demonstrated the use of several soft robots working together, like pincers, to grab objects,” Yin says. “By tuning the force exerted by the robots, we were able to lift objects as delicate as an egg, as well as objects weighing 10 kilograms or more.”

The researchers note that this work serves as a proof of concept, and are optimistic that they can modify the design to make LEAP robots that are even faster and more powerful.

“Potential applications include search and rescue technologies, where speed is essential, and industrial manufacturing robotics,” Yin says. “For example, imagine production line robotics that are faster, but still capable of handling fragile objects.

“We’re open to collaborating with the private sector to fine-tune ways they can incorporate this technology into their operations.”

The paper, “Leveraging elastic instabilities for amplified performance: spine-inspired high-speed and high-force soft robots,” is published in the journal Science Advances. First author of the paper is Yichao Tang, a former Ph.D. student of Jie Yin’s when Yin was on faculty at Temple University. The paper was co-authored by Yinding Chi, a Ph.D. student at NC State; Omid Maghsoudi and Andrew Spence of Temple; Jiefeng Sun and Jianguo Zhao of Colorado State University; and Tzu-Hao Huang and Hao Su of the City University of New York.

The work was done with support from the National Science Foundation under grants 2010717 and 2005374.