The great white shark is one of the most charismatic, but also one of the most infamous sharks. Despite its importance as top predator in marine ecosystems, it is considered threatened with extinction; its very slow growth and late reproduction with only few offspring are - in addition to anthropogenic reasons - responsible for this.

Young white sharks are born in designated breeding areas, where they are protected from other predators until they are large enough not to fear competitors any more. Such nurseries are essential for maintaining stable and sustainable breeding population sizes, have a direct influence on the spatial distribution of populations and ensure the survival and evolutionary success of species. Researchers* have therefore intensified the search for such nurseries in recent years in order to mitigate current population declines of sharks by suitable protection measures. "Our knowledge about current breeding grounds of the great white shark is still very limited, however, and palaeo-nurseries are completely unknown", explains Jaime Villafaña from the University of Vienna. 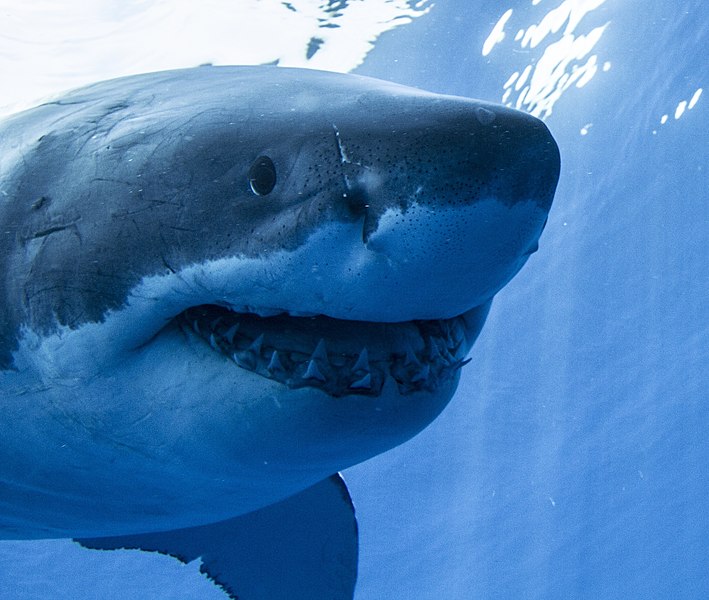 He and his colleagues analysed statistically 5 to 2 million year old fossil teeth of this fascinating shark, which were found at several sites along the Pacific coast of Chile and Peru, to reconstruct body size distribution patterns of great white shark in the past. The results show that body sizes varied considerably along the South American paleo-Pacific coast. One of these localities in northern Chile, Coquimbo, revealed the highest percentage of young sharks, the lowest percentage of "teenagers". Sexually mature animals were completely absent.

This first undoubted paleo-nursery of the Great White Shark is of enormous importance. It comes from a time when the climate was much warmer than today, so that this time can be considered analogous to the expected global warming trends in the future. "If we understand the past, it will enable us to take appropriate protective measures today to ensure the survival of this top predator, which is of utmost importance for ecosystems," explains palaeobiologist Jürgen Kriwet: "Our results indicate that rising sea surface temperatures will change the distribution of fish in temperate zones and shift these important breeding grounds in the future".

This would have a direct impact on population dynamics of the great white shark and would also affect its evolutionary success in the future. "Studies of past and present nursery grounds and their response to temperature and paleo-oceanographic changes are essential to protect such ecological key species," concluded Jürgen Kriwet.


Contacts and sources:
University of Vienna