Researchers at the University of Southampton have shown that an extinction event 360 million years ago, that killed much of the Earth’s plant and freshwater aquatic life, was caused by a brief breakdown of the ozone layer that shields the Earth from damaging ultraviolet (UV) radiation. This is a newly discovered extinction mechanism with profound implications for our warming world today.

Researchers at the University of Southampton have shown that an extinction event 360 million years ago, that killed much of the Earth’s plant and freshwater aquatic life, was caused by a brief breakdown of the ozone layer that shields the Earth from damaging ultraviolet (UV) radiation. This is a newly discovered extinction mechanism with profound implications for our warming world today. 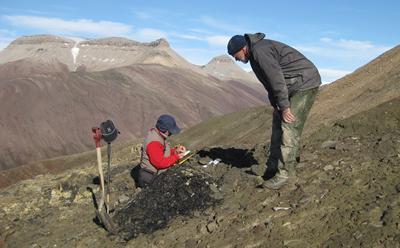 There have been a number of mass extinction in the geological past. Only one was caused by an asteroid hitting the Earth, which was 66 million years ago when the dinosaurs became extinct. Three of the others, including the end Permian Great Dying, 252 million years ago, were caused by huge continental scale volcanic eruptions that destabilised the Earth’s atmospheres and oceans.

Now, scientists have found evidence showing it was high levels of UV radiation which collapsed forest ecosystems and killed off many species of fish and tetrapods (our four limbed ancestors) at the end of the Devonian geological period, 359 million years ago. This damaging burst of UV radiation occurred as part of one of the Earth’s climate cycles, rather than being caused by a huge volcanic eruption.

The ozone collapse occurred as the climate rapidly warmed following an intense ice age and the researchers suggest that the Earth today could reach comparable temperatures, possibly triggering a similar event. Their findings are published in the journal Science Advances.

The team collected rock samples during expeditions to mountainous polar-regions in East Greenland, which once formed a huge ancient lake bed in the arid interior of the Old Red Sandstone Continent, made up of Europe and North America. This lake was situated in the Earth’s southern hemisphere and would have been similar in nature to modern day Lake Chad on the edge of the Sahara Desert.

Other rocks were collected from the Andean Mountains above Lake Titicaca in Bolivia. These South American samples were from the southern continent of Gondwana, which was closer to the Devonian South Pole. They held clues as to what was happening at the edge of the melting Devonian ice sheet, allowing a comparison between the extinction event close to the pole and close to the equator. 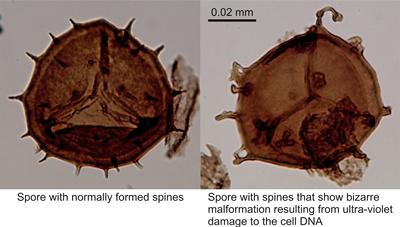 Back in the lab, the rocks were dissolved in hydrofluoric acid, releasing microscopic plant spores (like pollen, but from fern like plants that didn’t have seeds or flowers) which had lain preserved for hundreds of millions of years. On microscopic examination, the scientists found many of the spores had bizarrely formed spines on their surface – a response to UV radiation damaging their DNA. Also, many spores had dark pigmented walls, thought to be a kind of protective ‘tan’, due to increased and damaging UV levels.

The scientists concluded that, during a time of rapid global warming, the ozone layer collapsed for a short period, exposing life on Earth to harmful levels of UV radiation and triggering a mass extinction event on land and in shallow water at the Devonian-Carboniferous boundary.

Following melting of the ice sheets, the climate was very warm, with the increased heat above continents pushing more naturally generated ozone destroying chemicals into the upper atmosphere. This let in high levels of UV-B radiation for several thousand years.

Lead researcher Professor John Marshall, of the University of Southampton’s School of Ocean and Earth Science, who is a National Geographic Explorer, comments: “Our ozone shield vanished for a short time in this ancient period, coinciding with a brief and quick warming of the Earth. Our ozone layer is naturally in a state of flux – constantly being created and lost – and we have shown this happened in the past too, without a catalyst such as a continental scale volcanic eruption.”

During the extinction, plants selectively survived, but were enormously disrupted as the forest ecosystem collapsed. The dominant group of armoured fish became extinct. Those that survived – sharks and bony fish – remain to this day the dominant fish in our ecosystems.

These extinctions came at a key time for the evolution of our own ancestors, the tetrapods. These early tetrapods are fish that evolved to have limbs rather than fins, but still mostly lived in water. Their limbs possessed many fingers and toes. The extinction reset the direction of their evolution with the post-extinction survivors being terrestrial and with the number of fingers and toes reduced to five.

Professor Marshall says his team’s findings have startling implications for life on Earth today: “Current estimates suggest we will reach similar global temperatures to those of 360 million years ago, with the possibility that a similar collapse of the ozone layer could occur again, exposing surface and shallow sea life to deadly radiation. This would move us from the current state of climate change, to a climate emergency.”

The remote locations visited in East Greenland are very difficult to access, with travel involving light aircraft capable of landing directly on the tundra. Transport within the vast field area was by inflatable boats equipped with outboard motors, all of which had to fit in the small aircraft.

All field logistics was organised by CASP, an independent charitable trust based in Cambridge specialising in remote geological fieldwork. Mike Curtis, Managing Director of CASP says: “We have a history of assisting research geologists such as John Marshall and colleagues to access remote field areas and we are particularly pleased that their research has proved to have such potentially profound implications.”

Contacts and sources:
University of Southampton