Mergers between black holes and neutron stars in dense star clusters are quite unlike those that form in isolated regions where stars are few. Their associated features could be crucial to the study of gravitational waves and their source. Dr Manuel Arca Sedda of the Institute for Astronomical Computing at Heidelberg University came to this conclusion in a study that used computer simulations. The research may offer critical insights into the fusion of two massive stellar objects that astronomers observed in 2019. The findings were published in the journal “Communications Physics”. 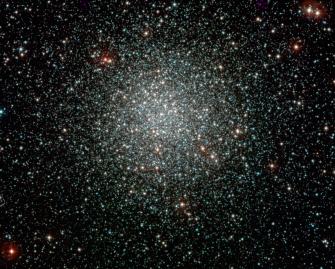 
Stars much more massive than our sun usually end their lives as a neutron star or black hole. Neutron stars emit regular pulses of radiation that allow their detection. In August 2017, for example, when the first double neutron star merger was observed, scientists all around the globe detected light from the explosion with their telescopes. Black holes, on the other hand, usually remain hidden because their gravitational attraction is so strong that even light cannot escape, making them invisible to electromagnetic detectors.

If two black holes merge, the event may be invisible but is nonetheless detectable from ripples in space-time in the form of so-called gravitational waves. Certain detectors, like the “Laser Interferometer Gravitational Waves Observatory” (LIGO) in the USA, are able to detect these waves. The first successful direct observation was made in 2015. The signal was generated by the fusion of two black holes. But this event may not be the only source of gravitational waves, which could also come from the merger of two neutron stars or a black hole with a neutron star. Discovering the differences is one of the major challenges in observing these events, according to Dr Arca Sedda.

In his study, the Heidelberg researcher analysed the fusion of pairs of black holes and neutron stars. He used detailed computer simulations to study the interactions between a system made up of a star and a compact object, such as a black hole, and a third massive roaming object that is required for a fusion. The results indicate that such three-body interactions can in fact contribute to black hole-neutron star mergers in dense stellar regions like globular star clusters. “A special family of dynamic mergers that is distinctly different from mergers in isolated areas can be defined”, explains Manuel Arca Sedda.

The fusion of a black hole with a neutron star was first observed by gravitational wave observatories in August 2019. Yet optical observatories around the world were unable to locate an electromagnetic counterpart in the region from which the gravitational wave signal originated, suggesting that the black hole had completely devoured the neutron star without first destroying it. If confirmed, this could be the first observed black hole-neutron star merger detected in a dense stellar environment, as described by Dr Arca Sedda.

Manuel Arca Sedda is a researcher at the Institute for Astronomical Computing at the Centre for Astronomy of Heidelberg University (ZAH), where he studies the interaction between black holes and their cosmic environment, such as star clusters.