While many of us use social media to be tickled silly by cat videos or wowed by delectable cakes, others use them to discover new species. Included in the latter group are researchers from the University of Copenhagen's Natural History Museum of Denmark. Indeed, they just found a new type of parasitic fungus via Twitter.

The photo shared on Twitter of the millipede Cambala by Derek Hennen. The two red circles indicate the presence of the fungus. 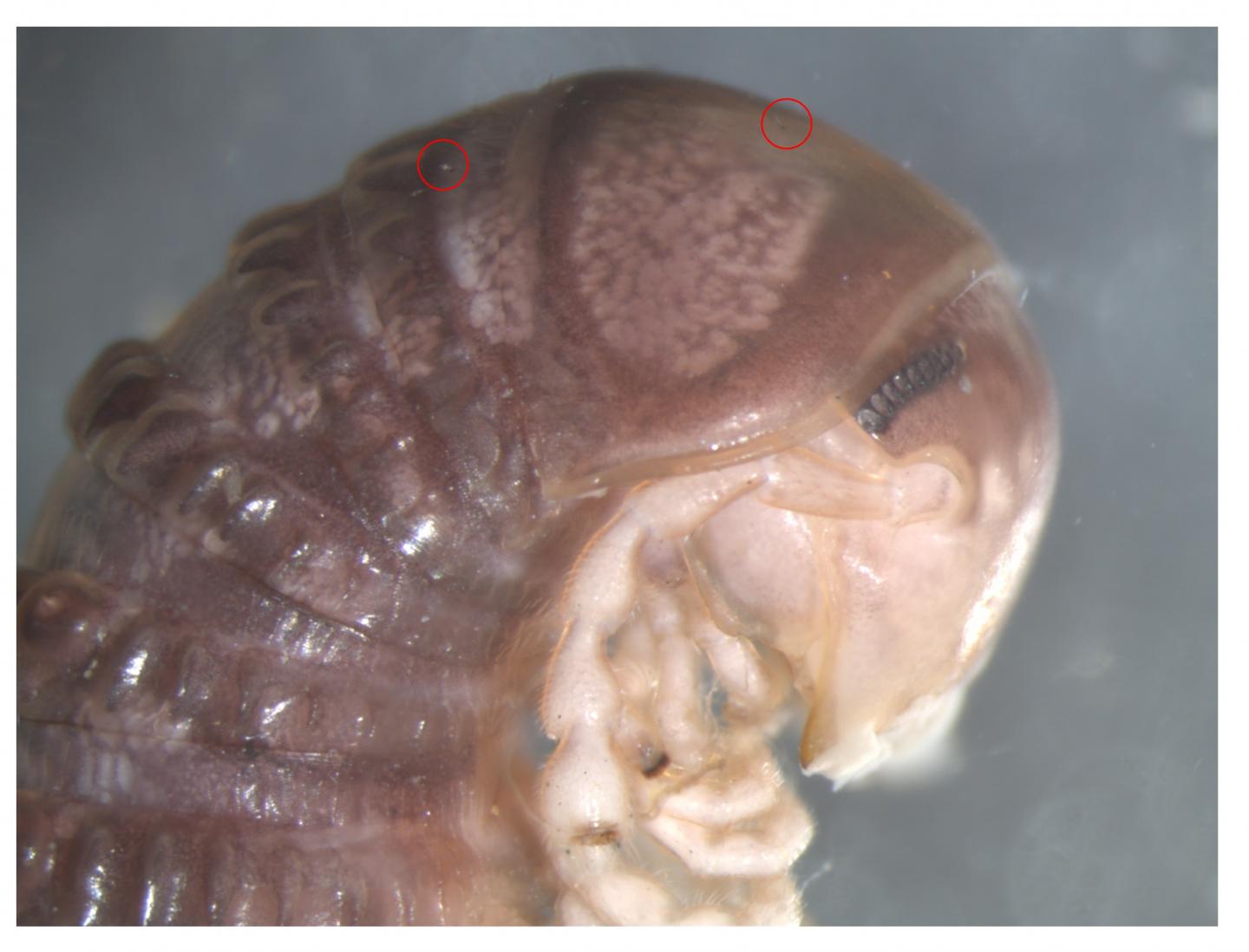 
It all began as biologist and associate professor Ana Sofia Reboleira of the National Natural History Museum was scrolling though Twitter. There, she stumbled upon a photo of a North American millipede shared by her US colleague Derek Hennen of Virginia Tech. She spotted a few tiny dots that struck her well-trained eyes.

"I could see something looking like fungi on the surface of the millipede. Until then, these fungi had never been found on American millipedes. So, I went to my colleague and showed him the image. That's when we ran down to the museum's collections and began digging", explains Ana Sofia Reboleira.

Together with colleague Henrik Enghoff, she discovered several specimens of the same fungus on a few of the American millipedes in the Natural History Museum's enormous collection -- fungi that had never before been documented. This confirmed the existence of a previously unknown species of Laboulbeniales - an order of tiny, bizarre and largely unknown fungal parasites that attack insects and millipedes.

The newly discovered parasitic fungus has now been given its official Latin name, Troglomyces twitteri.

Ana Sofia Reboleira points out that the discovery is an example of how sharing information on social media can result in completely unexpected results:

"As far as we know, this is the first time that a new species has been discovered on Twitter. It highlights the importance of these platforms for sharing research - and thereby being able to achieve new results. I hope that it will motivate professional and amateur researchers to share more data via social media. This is something that has been increasingly obvious during the coronavirus crisis, a time when so many are prevented from getting into the field or laboratories."

Reboleira believes that social media is generally playing a larger and larger role in research.

She stresses that the result was possible because of her access to one of the world's largest biological collections.

"Because of our vast museum collection, it was relatively easy to confirm that we were indeed looking at an entirely new species for science. This demonstrates how valuable museum collections are. There is much more hiding in these collections than we know," says Ana Sofia Reboleira.

Laboulbeniales-fungi look like tiny larvae. The fungi are in a class of their own because they live on the outside of host organisms, and even on specific parts of bodies - in this case, on the reproductive organs of millipedes. The fungus sucks nutrition from its host animal by piercing the host's outer shell using a special suction structure, while the other half of the fungus protrudes.

Approximately 30 different species of parasitic Laboulbeniales-fungi attack millipedes. The vast majority of these were only discovered after 2014. According to Reboleira, there are most likely a great number remaining to be discovered. Research in the area of Laboulbeniales remains extremely scarce.

Nor is much known about their own biology, says Reboleira, who researches these fungi on a daily basis. She believes that these fungi can not only teach us about the insects upon which they live, but also about the mechanisms behind parasitism itself - that is, the relationship between parasites and their hosts. She hopes that the research will also provide useful knowledge about the parasites that attack and can be harmful to human health.

FACTS:
The new species Troglomyces twitteri belongs to the order of microscopic parasitic fungi known as Laboulbeniales. These fungi live on insects, arachnids and millipedes, and rely on their host organisms to survive.

The research results are published in the scientific journal MycoKeys: https://mycokeys.pensoft.net/article/51811

The research was conducted by: Sergi Santamaria of the Departament de Biologia Animal, de Biologia Vegetal i d'Ecologia, Universitat Autònoma de Barcelona, Spain; and Henrik Enghoff & Ana Sofia Reboleira from the Natural History Museum of Denmark at the University of Copenhagen.

Millipede specimens from the Muséum national d'Histoire naturelle (MNHN) in Paris helped confirm the discovery of the new species of fungus.

The Natural History Museum of Denmark's entomological collection is one of the world's largest, housing more than 3.5 million pin-mounted insects and at least as many alcohol-preserved insect and land animal specimens. About 100,000 known species are represented (out of a total number of over one million species).

Contacts and sources:
University of Copenhagen