Working memory, the ability to hold a thought in mind even through distraction, is the foundation of abstract reasoning and a defining characteristic of the human brain. It is also impaired in disorders such as schizophrenia and Alzheimer’s disease.

Now Yale researchers have found a key molecule that helps neurons maintain information in working memory, which could lead to potential treatments for neurocognitive disorders, they report March 19 in the journal Neuron.

“Working memory arises from neuronal circuits in the prefrontal cortex,” said senior author Min Wang, senior research scientist in neuroscience. “We have been learning that these circuits have special molecular maintenance requirements.”

Areas of the brain involved in memory formation 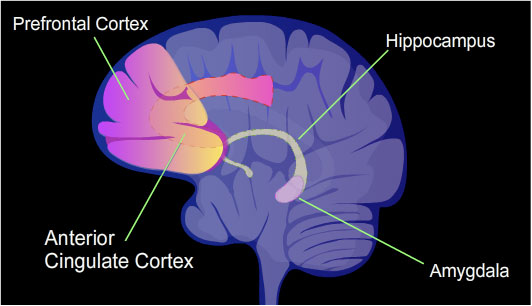 Neurons in the prefrontal cortex excite each other to keep information “in mind.” These circuits act as a sort of mental sketch pad, allowing us to remember that caramelized onions are cooking in the frying pan while we search the next room for a pair of scissors.

Wang notes that a drug currently under development for the treatment of schizophrenia stimulates this M1 receptor and has shown promise in early clinical trials.

Yale’s Veronica Galvin is first author of the paper, which was primarily funded by the National Institutes of Health.
Contacts and sources:
Bill Hathaway
Yale University