Analysis of Paleolithic-era teeth from a 28,500-year-old fossil site in the Czech Republic provides supporting evidence for two groups of canids - one dog-like and the other wolf-like - with differing diets, which is consistent with the early domestication of dogs.

The study, published in the Journal of Archaeological Science, was co-directed by Peter Ungar, Distinguished Professor of anthropology at the University of Arkansas.

The researchers performed dental microwear texture analysis on a sample of fossils from the Předmostí site, which contains both wolf-like and dog-like canids. Canids are simply mammals of the dog family. The researchers identified distinctive microwear patterns for each canid morphotype. Compared to the wolf-like canids, the teeth of the early dog canids - called "protodogs" by the researchers - had larger wear scars, indicating a diet that included hard, brittle foods. The teeth of the wolf-like canids had smaller scars, suggesting they consumed more flesh, likely from mammoth, as shown by previous research.

This greater durophagy - animal eating behavior suggesting the consumption of hard objects - among the dog-like canids means they likely consumed bones and other less desirable food scraps within human settlement areas, Ungar said. It provides supporting evidence that there were two types of canids at the site, each with a distinct diet, which is consistent with other evidence of early-stage domestication.

"Our primary goal was to test whether these two morphotypes expressed notable differences in behavior, based on wear patterns," said Ungar. "Dental microwear is a behavioral signal that can appear generations before morphological changes are established in a population, and it shows great promise in using the archaeological record to distinguish protodogs from wolves."

Peter Ungar with the jaw of a dog-like canid at the Moravian Museum in the Czech Republic. 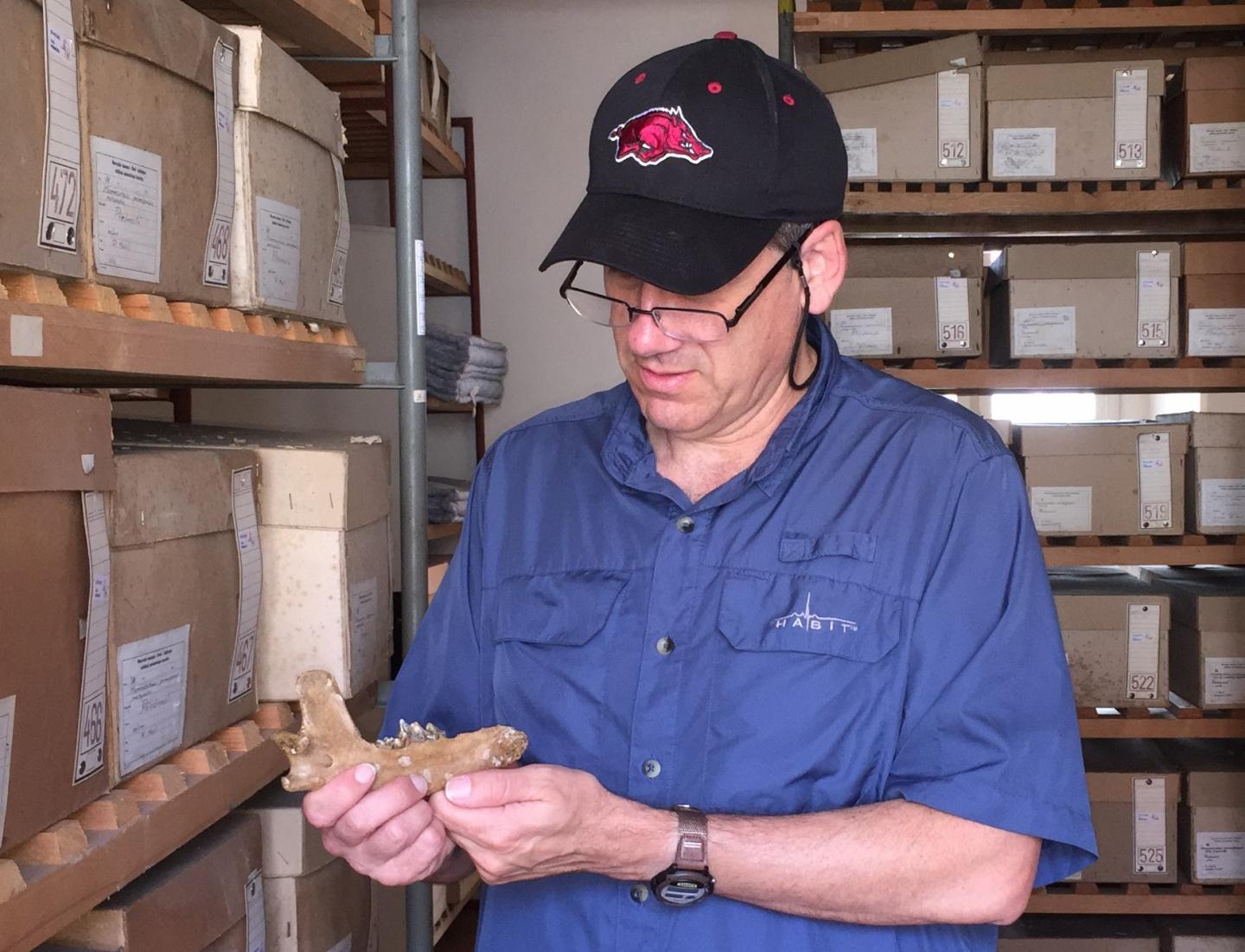 
Dog domestication is the earliest example of animal husbandry and the only type of domestication that occurred well before the earliest definitive evidence of agriculture. However, there is robust scientific debate about the timing and circumstances of the initial domestication of dogs, with estimates varying between 15,000 and 40,000 years ago, well into the Ice Age, when people had a hunter-gatherer way of life. There is also debate about why wolves were first domesticated to become dogs. From an anthropological perspective, the timing of the domestication process is important for understanding early cognition, behavior and the ecology of early Homo sapiens.

The study's lead author is Kari Prassack, curator of paleontology at Hagerman Fossil Beds National Monument, which is part of the National Park Service. Co-authors were Martina Lázničková-Galetová of the Moravian Museum in Czech Republic; Mietje Germonpré of the Royal Belgian Institute of Natural Sciences; and Josephine DuBois, Ungar's former Honors College student and now student at the University of Missouri-Kansas City School of Dentistry.

This research was supported by the Czech Science Foundation, the Ministry of Culture of the Czech Republic and the University of Arkansas Honors College. Fossil material for this study came from collections of the Moravian Museum in Czech Republic.