A research team led by scientists from City University of Hong Kong (CityU) has developed a new form of droplet-based electricity generator (DEG).

It features a field-effect transistor (FET)-like structure that allows for high energy-conversion efficiency, and its instantaneous power density is increased by thousands of times compared to its counterparts without FET-like structure.

This groundbreaking achievement can help to advance scientific research into water energy generation and tackle the energy crisis.

The research was led by Professor Wang Zuankai from CityU's Department of Mechanical Engineering; Professor Zeng Xiaocheng from the University of Nebraska-Lincoln, US; and Professor Wang Zhonglin, Founding Director and Chief Scientist at the Beijing Institute of Nanoenergy and Nanosystems of Chinese Academy of Sciences.

Their findings were published in the latest issue of the highly prestigious scientific journal Nature under the title “A droplet-based electricity generator with high instantaneous power density”.

Fig a is the schematic diagram of DEG: an ITO glass slide is coated with a thin film of PTFE and an aluminium electrode is put on top of it. Drops of water act as the gate of the transistor and complete the circuit when they hit the surface of the glass. Fig b is the optical image showing four parallel DEG devices fabricated on the glass substrate.

A conventional droplet energy generator based on the triboelectric effect can generate electricity induced by contact electrification and electrostatic induction when a droplet hits a surface. However, the amount of charge generated on the surface is limited by the interfacial effect, and as a result, the energy conversion efficiency is quite low.

In order to improve the conversion efficiency, the research team has spent two years developing the DEG. Its instantaneous power density can reach up to 50.1 W/m2­, thousands of times higher than similar devices without the use of the FET-like design. The energy conversion efficiency is also markedly higher.

Professor Wang pointed out that there are two crucial factors for the invention. First, the team found that the continuous droplets impinging on PTFE, an electret material with a quasi-permanent electric charge, provides a new route for the accumulation and storage of high-density surface charges. They found that when water droplets continuously hit the surface of PTFE, the surface charge generated will accumulate and gradually reach saturation. This new discovery has helped to overcome the bottleneck of the low-charge density encountered in previous work.

Research shows that a drop of water released from a height of 15cm can generate a voltage of over 140V, which can light up 100 small LED lights. Please click to view the video. 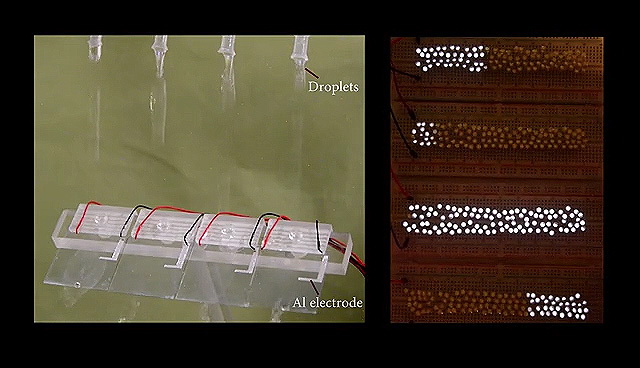 Another key feature is a unique set of structures similar to the FET that won the Nobel Prize in Physics in 1956 and has become the basic building block for modern electronic devices. The device consists of an aluminium electrode and an indium tin oxide (ITO) electrode with a film of PTFE deposited on it. The PTFE/ITO electrode is responsible for the charge generation, storage, and induction. When a falling water droplet hits and spreads on the PTFE/ITO surface, it naturally “bridges” the aluminium electrode and the PTFE/ITO electrode, translating the original system into a closed-loop electric circuit.

With this special design, a high density of surface charge can be accumulated on the PTFE through continuous droplet impinging. Meanwhile, when the spreading water connects the two electrodes, all the stored charges on the PTFE can be fully released for the generation of electric current. As a result, both the instantaneous power density and energy conversion efficiency are much higher.

“Our research shows that a drop of 100 microlitres [1 microlitre = one-millionth litre] of water released from a height of 15 cm can generate a voltage of over 140V, and the power generated can light up 100 small LED lights,” said Professor Wang.

Professor Wang said he hoped that the outcome of this research would help to harvest water energy to respond to the global problem of renewable energy shortage. He believed that in the long run, the new design could be applied and installed on different surfaces, where liquid is in contact with a solid, to fully utilise the low-frequency kinetic energy in water. This can range from the hull surface of a ferry to the surface of umbrellas or even inside water bottles. 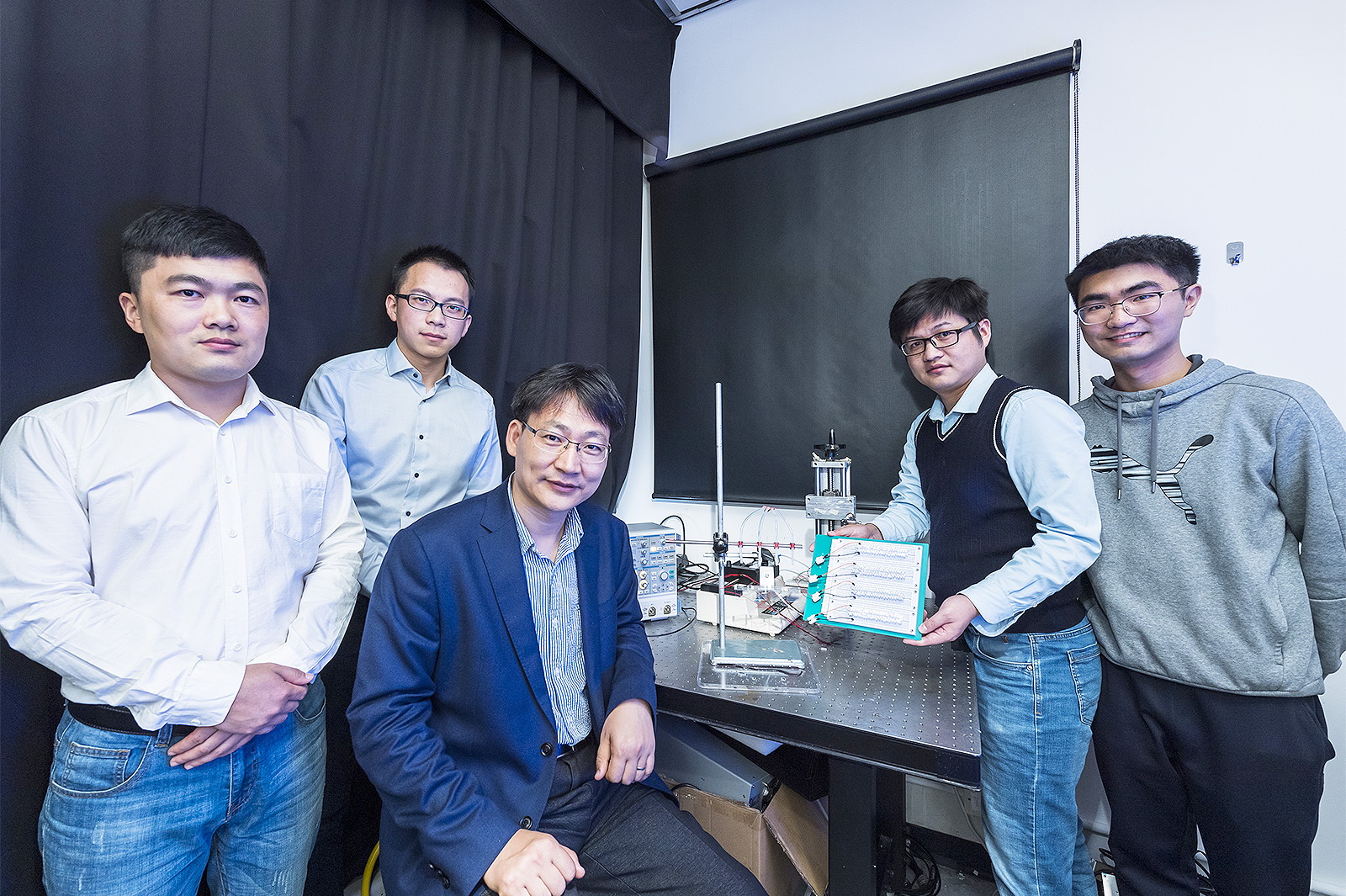