Mars Is Shaking, More Than 450 Marsquakes Recorded by InSight

Fifteen months after the successful landing of the NASA InSight mission on Mars, first scientific analyses of ETH Zurich researchers and their partners reveal that the planet is seismically active. The recorded data enables a better understanding of the interior of Mars, the primary goal of the InSight mission. 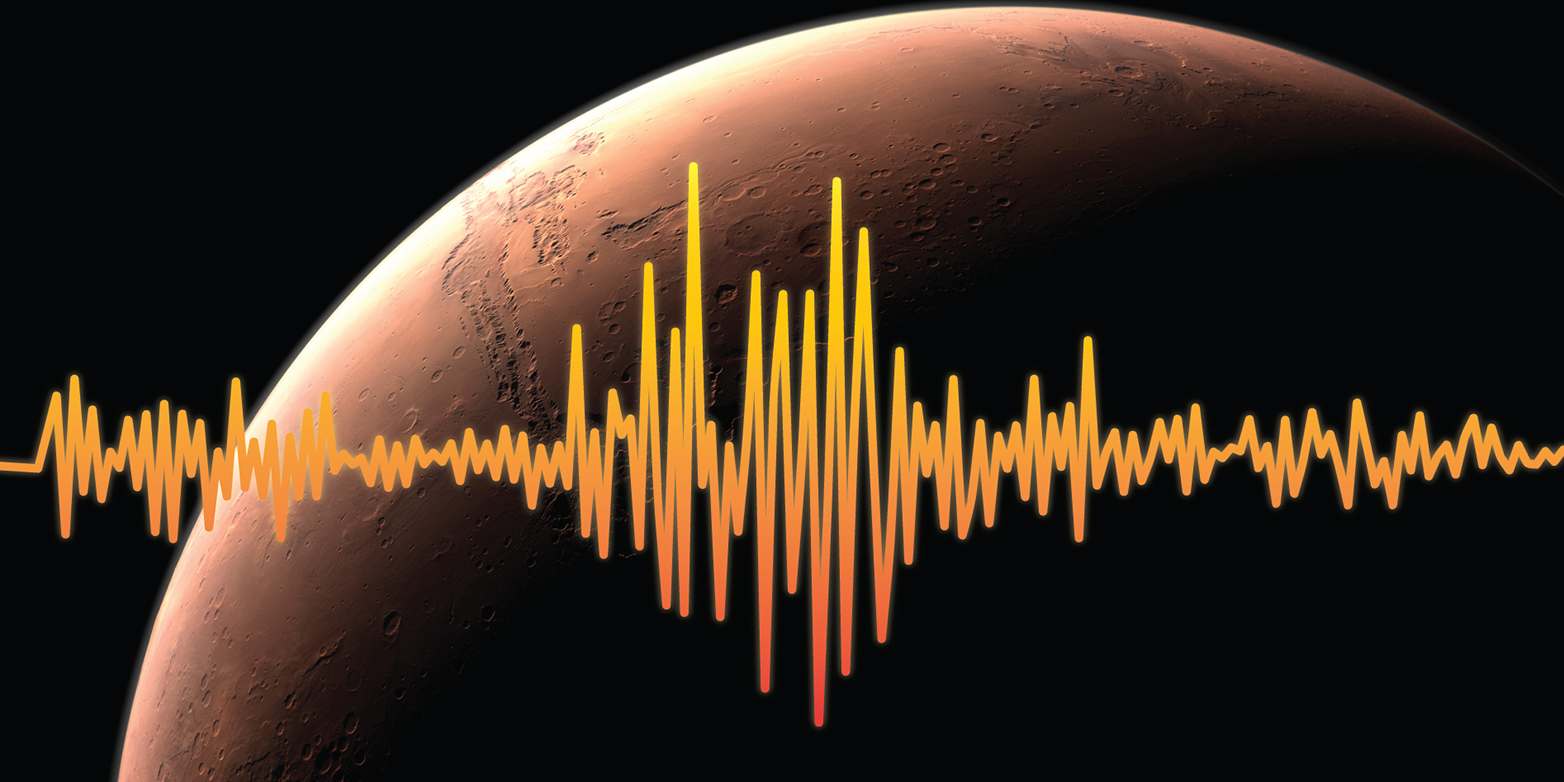 On 26 November 2018, the NASA InSight lander successfully set down on Mars in the Elysium Planitia region. Seventy Martian days later, the mission’s seismometer SEIS began recording the planet’s vibrations. A team of researchers and engineers at ETH Zurich, led by ETH Professor Domenico Giardini, had delivered the SEIS control electronics and is responsible for the Marsquake Service. The latter is in charge for the daily interpretation of the data transmitted from Mars, in collaboration with the Swiss Seismological Service at ETH Zurich. Now, the journal Nature Geoscience published a series of articles on the results of the mission in the first months of operation on Mars.

As reported in these articles, InSight recorded 174 events until the end of September 2019. Since then, the measurements have continued leading to more than 450 observed marsquakes as of today, which have not yet been analysed in detail. This accounts for one event a day on average.

The data allows researchers observing how seismic waves travel through the planet and unveiling its internal characteristics – similar to how x-​rays are used in medical tomography. Before InSight landed, researchers had developed a wide range of possible models to represent the internal structure of the red planet. The recorded marsquakes, already after few months, enable refining the understanding of the structure of the planet and to reduce the uncertainties.
Interpreting marsquake data is challenging

Marsquakes are similar to the seismic events we see on Earth, although they are generally of smaller magnitude. The 174 registered marsquakes can be categorized in two families: One includes 24 low-​frequency events with magnitudes between 3 and 4, as documented in the papers, with waves propagating through the Martian mantle. A second family of marsquakes comprises 150 events with smaller magnitudes, shallower hypocentral depth and high frequency waves trapped in the Martian crust.

“Marsquakes have characteristics already observed on the Moon during the Apollo era, with a long signal duration (10 to 20 minutes) due to the scattering properties of the Martian crust”, explains ETH Professor Giardini. In general, however, he says, interpreting marsquake data is very challenging and in most cases, it is only possible to identify the distance but not the direction from which the waves are arriving.

InSight opens a new era for planetary seismology. The SEIS performance exceeded so far expectations, considering the harsh conditions on Mars, characterized by temperatures ranging from minus 80 to 0 degrees Celsius every day and by strong wind oscillations. Indeed wind shakes the InSight lander and its instrumentation during the day leading to a high level of ambient noise. However, at sunset, the winds calm down allowing recording the quietest seismic data ever collected in the solar system. As a result, most seismic events detected on Mars by SEIS occurred in the quiet night hours. The challenging environment also requires to carefully distinguishing between seismic events and signals originating from movements of the lander, other instruments or atmospheric-​induced perturbances.

The hammering by the HP3 instrument (another InSight experiment) and the close passage of whirlwinds (dust devils), recorded by SEIS, allow to map the physical properties of the shallow soil layers just below the station. We now know that SEIS landed on a thin, sandy layer reaching a few meters deep, in the middle of a 20 meter-​wide ancient impact crater. At greater depths, the Martian crust has properties comparable to Earth’s crystalline massifs but appears to be more fractured. The propagation of the seismic waves suggest that the upper mantle has a stronger attenuation compared to the lower mantle.

InSight landed in a rather quiet region of Mars, as no events near the station have been recorded up to now. The three biggest events were located in the Cerberus Fossae region about 1’500 km away. It is a tectonic graben system, caused by the weight of the Elysium Mons, the biggest volcano in the Elysium Planitia area. This provides strong evidence that seismic activity on Mars is not only a consequence of the cooling and therewith the shrinking of the planet but also induced by tectonic stress. The total seismic energy released on Mars lies between the one of Earth and of the Moon. 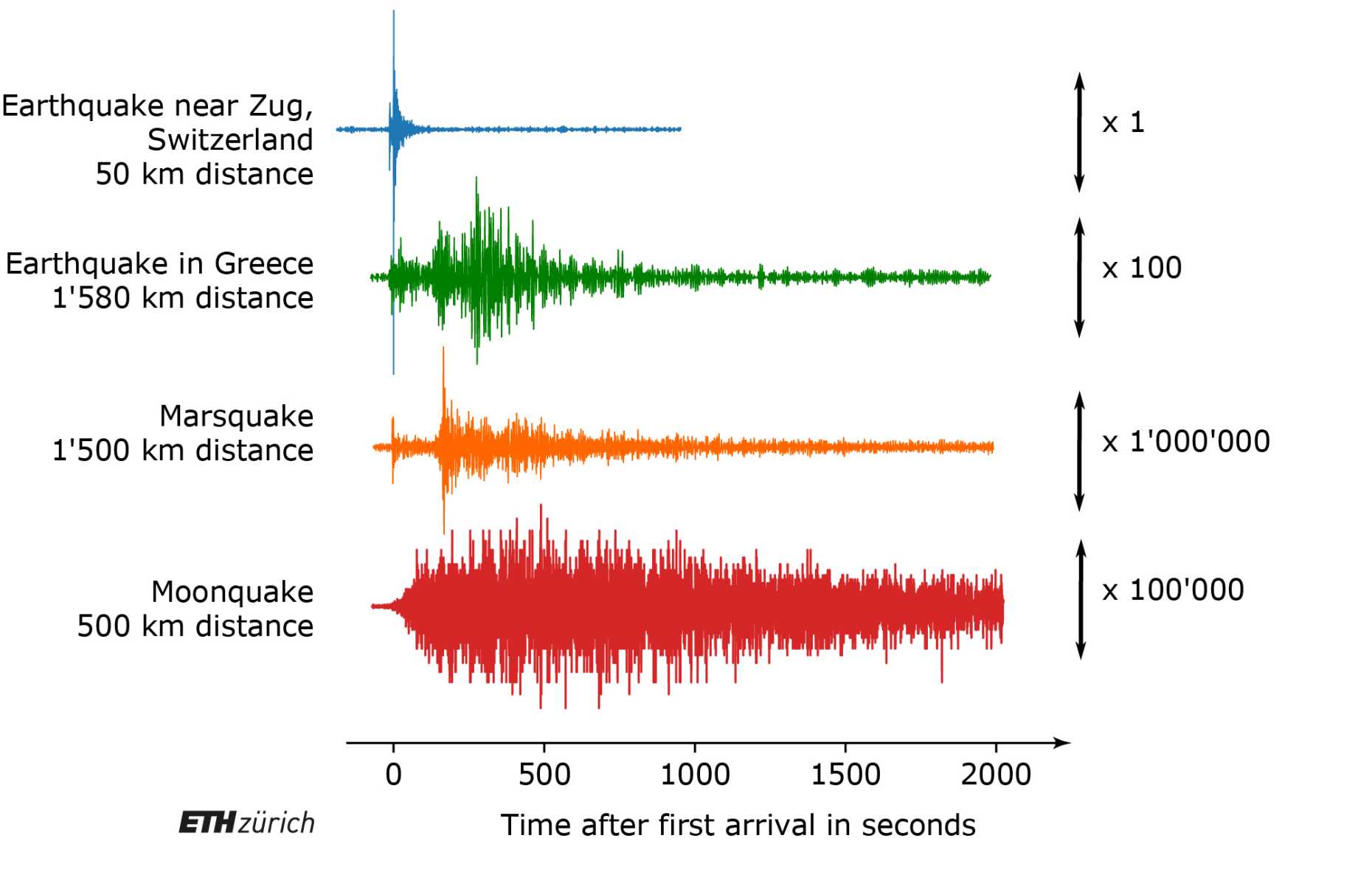 SEIS, complementary to other InSight measurements, also meaningfully contributed data to better understand the meteorological processes on Mars. The instrument’s sensitivity to both wind and atmospheric pressure allowed identifying meteorological phenomena characteristic of Mars, including the many dust devils that pass by the spacecraft every afternoon.