First Results on the "Spectacular Meteorite Fall" of Flensburg

Planetologists from Münster University show that the meteorite contains minerals that formed under the presence of water on small planetesimals in the early history of our solar system.

A fireball in the sky, accompanied by a bang, amazed hundreds of eyewitnesses in northern Germany in mid-September last year. The reason for the spectacle was a meteoroid entering the Earth's atmosphere and partially burning up. One day after the observations, a citizen in Flensburg found a stone weighing 24.5 grams and having a fresh black fusion crust on the lawn of his garden.

Dieter Heinlein, coordinator of the German part of the European Fireball Network at the German Aerospace Center in Augsburg, directly recognized the stone as a meteorite and delivered the rock to experts at the “Institut für Planetologie” at Münster University. Prof. Addi Bischoff and PhD student Markus Patzek have been studying the stone mineralogically and chemically ever since. About 15 university and research institutes in Germany, France, and Switzerland now take part in the science consortium.

The meteorite "Flensburg" in close-up view 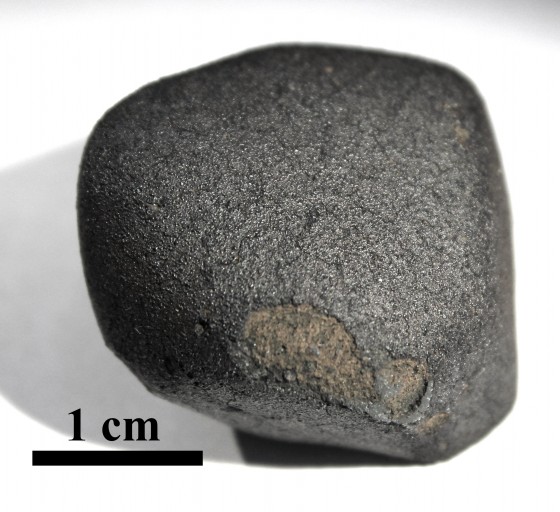 The first research results show that the meteorite "Flensburg", named after the location of the fall, belongs to an extremely rare type of carbonaceous chondrites. Scanning electron microscopic analyses prove that it contains minerals, especially sheet silicates and carbonates that formed in the presence of water on small planetesimals in the early history of our solar system. Thus, these types of early parent bodies can be regarded as possible building blocks of the Earth that delivered water.

"The meteorite of Flensburg belongs to an extremely rare meteorite class and is the only meteorite fall of this class in Germany proving that 4.56 billion years ago there must have been small bodies in the early solar system storing liquid water. Perhaps such bodies also delivered water to the Earth,” Addi Bischoff said.

Meteorites provide information on the development of the Earth

The new German meteorite “Flensburg” fully fits into the research program of the Collaborative Research Centre „TRR170 – Late Accretion onto Terrestrial Planets”, a science cooperation between institutions in Münster and Berlin. The major aim of the Collaborative Research Centre TRR170 is to understand the late growth history of the terrestrial planets. This leads to the question about the possible building blocks of the Earth. In order to find answers to this question, the researchers investigate various aspects including meteorites – most of them are fragments of asteroids and can be regarded as the oldest rocks of our solar system. Thus, studying them allows scientists to gain insight into the formation processes of the first solids and accretion and evolution of small bodies and planets in our solar system.

Publication: The Flensburg meteorite in the “Meteoritical Bulletin Database”