Why are some people better able to fight off the flu than others? Part of the answer, according to a new study, is related to the first flu strain we encounter in childhood.

Scientists from UCLA and the University of Arizona have found that people’s ability to fight off the flu virus is determined not only by the subtypes of flu they have had throughout their lives, but also by the sequence in which they are been infected by the viruses. Their study is published in the open-access journal PLoS Pathogens.

A computer-generated 3D rendering of a flu virus. 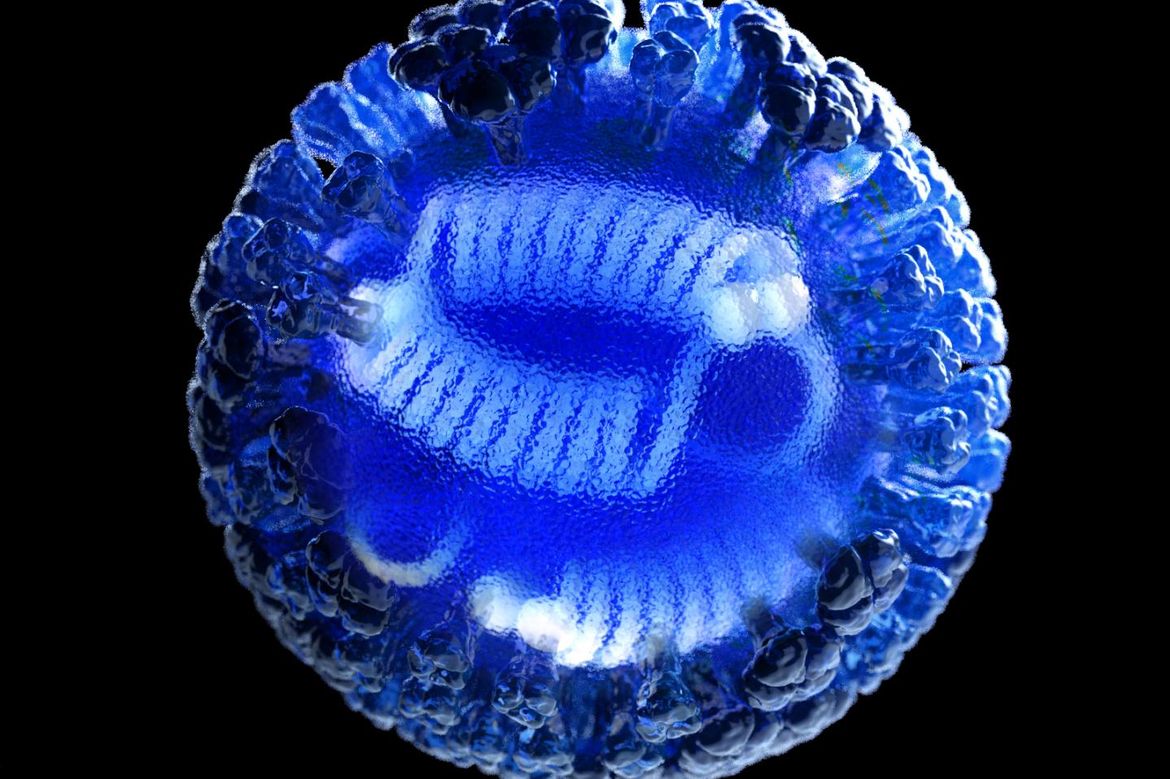 
The research offers an explanation for why some people fare much worse than others when infected with the same strain of the flu virus, and the findings could help inform strategies for minimizing the effects of the seasonal flu.

In addition, UCLA scientists, including Professor James Lloyd-Smith, who also was a senior author of the PLoS Pathogens research, recently completed a study that analyzes travel-related screening for the new novel coronavirus 2019-nCoV. (The research is under review; a preprint is online.)

The researchers report that screening travelers is not very effective for the 2019 coronavirus — that it will catch less than half of infected travelers, on average — and that most infected travelers are undetectable, meaning that they have no symptoms yet, and are unaware that they have been exposed. So stopping the spread of the virus is not a matter of just enhancing screening methods at airports and other travel hubs.

“This puts the onus on government officials and public health officials to follow up with travelers after they arrive, to isolate them and trace their contacts if they get sick later,” said Lloyd-Smith, a UCLA professor of ecology and evolutionary biology. Many governments have started to impose quarantines, or even travel bans, as they realize that screening is not sufficient to stop the spread of the coronavirus.

One major concern, Lloyd-Smith said, is that other countries, especially developing nations, lack the infrastructure and resources for those measures, and are therefore vulnerable to importing the disease.

“Much of the public health world is very concerned about the virus being introduced into Africa or India, where large populations exist that do not have access to advanced medical care,” he said.

The researchers, including scientists from the University of Chicago and the London School of Tropical Hygiene and Medicine, have developed a free online app where people can calculate the effectiveness of travel screening based on a range of parameters.

“Our finding concerning the effectiveness of screening for the coronavirus is not a criticism of screening practices being done by public health officials in the United States or elsewhere,” Lloyd-Smith said.

He said that the biology and epidemiology of the virus itself makes infection extremely difficult to detect in its early stages, because the majority of cases show no symptoms for five days or longer after exposure.

“My colleagues and I know there is a lot of speculation online about the coronavirus and how it spreads,” Lloyd-Smith said “People should look to trusted sources for accurate information, such as the Centers for Disease Control and Prevention, the Los Angeles County Department of Public Health, and the peer-reviewed scientific literature.”

The PLoS Pathogens study may help solve a problem that had for decades vexed scientists and health care professionals: why the same strain of the flu virus affects people with various degrees of severity.

A team that included some of the same UCLA and Arizona scientists reported in 2016 that exposure to influenza viruses during childhood gives people partial protection for the rest of their lives against distantly related influenza viruses. Biologists call the idea that past exposure to the flu virus determines a person’s future response to infections “immunological imprinting.”

The 2016 research helped overturn a commonly held belief that previous exposure to a flu virus conferred little or no immunological protection against strains that can jump from animals into humans, such as those causing the strains known as swine flu or bird flu. Those strains, which have caused hundreds of spillover cases of severe illness and death in humans, are of global concern because they could gain mutations that allow them to readily jump not only from animal populations to humans, but also to spread rapidly from person to person.

In the new study, the researchers investigated whether immunological imprinting could explain people’s response to flu strains already circulating in the human population and to what extent it could account for observed discrepancies in how severely the seasonal flu affects people in different age groups.

To track how different strains of the flu virus affect people at different ages, the team analyzed health records that the Arizona Department of Health Services obtains from hospitals and private physicians.

Two subtypes of influenza virus, H3N2 and H1N1, have been responsible for seasonal outbreaks of the flu over the past several decades. H3N2 causes the majority of severe cases in high-risk elderly people and the majority of deaths from the flu. H1N1 is more likely to affect young and middle-aged adults, and causes fewer deaths.

The researchers also analyzed the evolutionary relationships between the flu strains. H1N1 and H3N2, they learned, belong to two separate branches on the influenza “family tree,” said James Lloyd-Smith, a UCLA professor of ecology and evolutionary biology and one of the study’s senior authors. While infection with one does result in the immune system being better prepared to fight a future infection from the other, protection against future infections is much stronger when one is exposed to strains from the same group one has battled before, he said.

The records also revealed another pattern: People whose first childhood exposure was to H2N2, a close cousin of H1N1, did not have a protective advantage when they later encountered H1N1. That phenomenon was much more difficult to explain, because the two subtypes are in the same group, and the researchers’ earlier work showed that exposure to one can, in some cases, grant considerable protection against the other.

“Our immune system often struggles to recognize and defend against closely related strains of seasonal flu, even though these are essentially the genetic sisters and brothers of strains that circulated just a few years ago,” said lead author Katelyn Gostic, who was a UCLA doctoral student in Lloyd-Smith’s laboratory when the study was conducted and is now a postdoctoral fellow at the University of Chicago. “This is perplexing because our research on bird flu shows that deep in our immune memory, we have some ability to recognize and defend against the distantly related, genetic third cousins of the strains we saw as children.

Around the world, influenza remains a major killer. The past two flu seasons have been more severe than expected, said Michael Worobey, a co-author of the study and head of the University of Arizona’s department of ecology and evolutionary biology. In the 2017–18 season, 80,000 people died in the U.S., more than in the swine flu pandemic of 2009, he said.

People who had their first bout of flu as children in 1955 — when the H1N1 was circulating but the H3N2 virus was not — were much more likely to be hospitalized with an H3N2 infection than an H1N1 infection last year, when both strains were circulating, Worobey said.

“The second subtype you’re exposed to is not able to create an immune response that is as protective and durable as the first," he said.

The researchers hope that their findings could help predict which age groups might be severely affected during future flu seasons based on the subtype circulating. That information could also help health officials prepare their response, including decisions about who should receive certain vaccines that are only available in limited quantities.

The study’s co-authors are Rebecca Bridge of the Arizona Department of Health Services and Cecile Viboud of the Fogarty International Center at the NIH.