For three years, anthropologist Alan Rogers has attempted to solve an evolutionary puzzle. His research untangles millions of years of human evolution by analyzing DNA strands from ancient human species known as hominins. Like many evolutionary geneticists, Rogers compares hominin genomes looking for genetic patterns such as mutations and shared genes. He develops statistical methods that infer the history of ancient human populations.

In 2017, Rogers led a study which found that two lineages of ancient humans, Neanderthals and Denisovans, separated much earlier than previously thought and proposed a bottleneck population size. It caused some controversy—anthropologists Mafessoni and Prüfer argued that their method for analyzing the DNA produced different results. Rogers agreed, but realized that neither method explained the genetic data very well.

“Both of our methods under discussion were missing something, but what?” asked Rogers, professor of anthropology at the University of Utah.

The new study has solved that puzzle and in doing so, it has documented the earliest known interbreeding event between ancient human populations—a group known as the “super-archaics” in Eurasia interbred with a Neanderthal-Denisovan ancestor about 700,000 years ago. The event was between two populations that were more distantly related than any other recorded. The authors also proposed a revised timeline for human migration out of Africa and into Eurasia. The method for analyzing ancient DNA provides a new way to look farther back into the human lineage than ever before.

“We’ve never known about this episode of interbreeding and we’ve never been able to estimate the size of the super-archaic population,” said Rogers, lead author of the study. “We’re just shedding light on an interval on human evolutionary history that was previously completely dark.”

The paper was published on Feb. 20, 2020, in the journal Science Advances.

Out of Africa and interbreeding 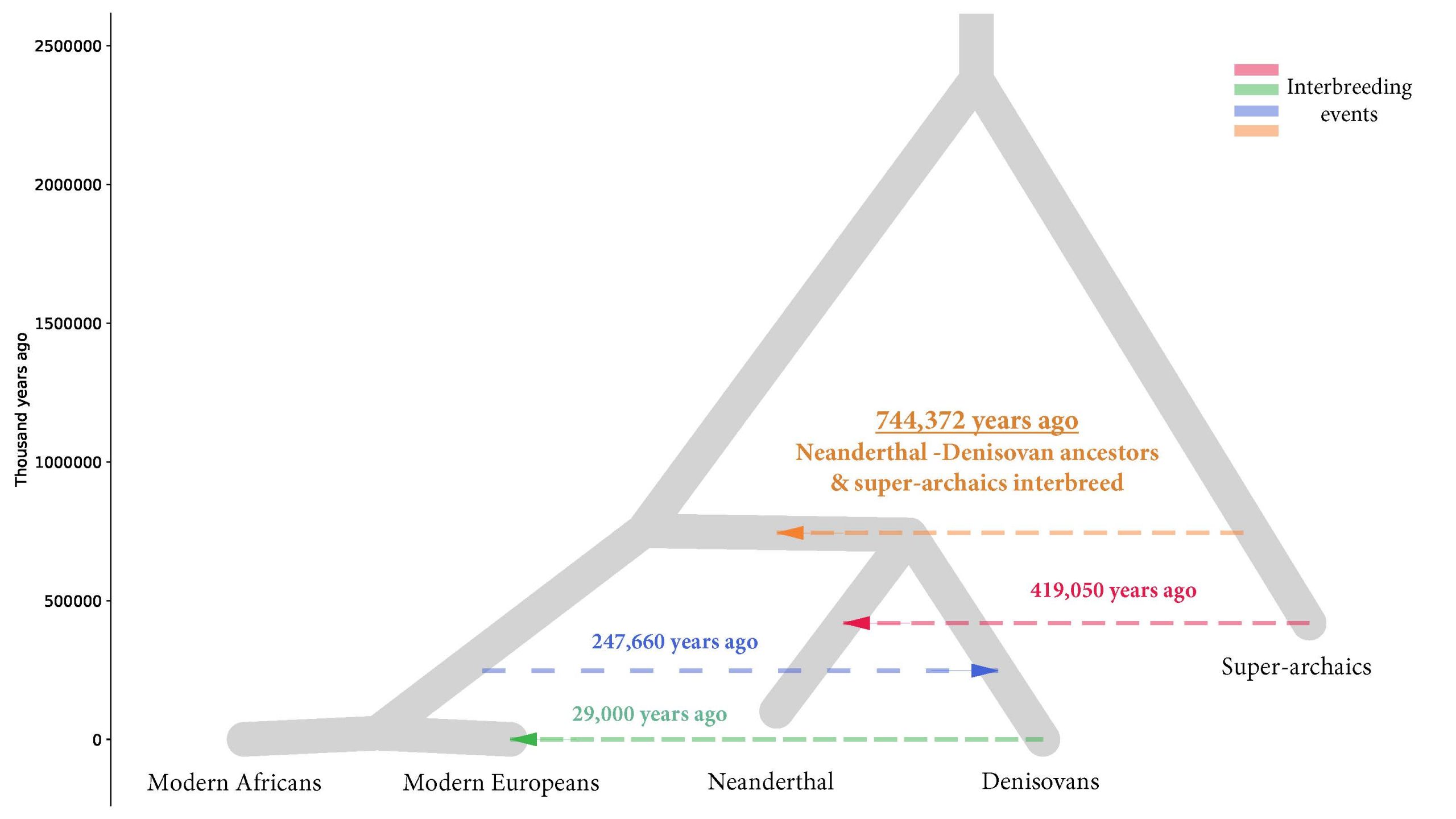 
Rogers studied the ways in which mutations are shared among modern Africans and Europeans, and ancient Neanderthals and Denisovans. The pattern of sharing implied five episodes of interbreeding, including one that was previously unknown. The newly discovered episode involves interbreeding over 700,000 years ago between a distantly related “super-archaic” population which separated from all other humans around two million years ago, and the ancestors of Neanderthals and Denisovans.

“These findings about the timing at which interbreeding happened in the human lineage is telling something about how long it takes for reproductive isolation to evolve,” said Rogers.

The authors used other clues in the genomes to estimate when the ancient human populations separated and their effective population size. They estimated the super-archaic separated into its own species about two million years ago. This agrees with human fossil evidence in Eurasia that is 1.85 million years old.

The researchers also proposed there were three waves of human migration into Eurasia. The first was two million years ago when the super-archaics migrated into Eurasia and expanded into a large population. Then 700,000 years ago, Neanderthal-Denisovan ancestors migrated into Eurasia and quickly interbred with the descendants of the super-archaics. Finally, modern humans expanded to Eurasia 50,000 years ago where we know they interbred with other ancient humans, including with the Neanderthals.

“I’ve been working for the last couple of years on this different way of analyzing genetic data to find out about history,” said Rogers. “It’s just gratifying that you come up with a different way of looking at the data and you end up discovering things that people haven’t been able to see with other methods.”

Nathan S. Harris and Alan A. Achenbach from the Department of Anthropology at the University of Utah also contributed to the study.