A new study by scientists from the University of Bristol's School of Earth Sciences, shows a well-known group of extinct marine reptiles had an early burst in their diversity and evolution - but that a failure to adapt in the long-run may have led to their extinction.

Ichthyosaurs rapidly evolved a large range of forms and sizes early in their evolution, but after a bottle neck at the end of the Triassic, show much slower rates and more restricted variety 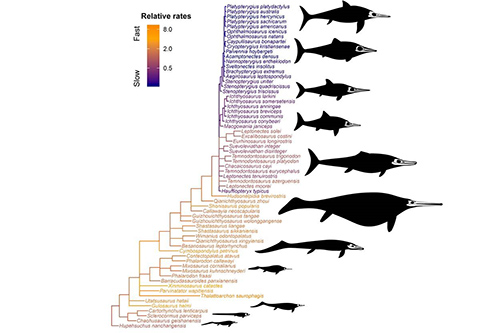 Ichthyosaurs were fish-like reptiles that first appeared about 250 million years ago and quickly diversified into highly capable swimmers, filling a broad range of sizes and ecologies in the early Mesozoic oceans. However, this rapid pace didn’t last long and an evolutionary bottleneck 200 million years ago, through which only one lineage of ichthyosaurs survived, led to much slower evolution in much of their long history.

Dr Ben Moon, who led the research, published in the journal Communications Biology, said: "Ichthyosaurs are a fascinating group of animals to work on because they evolved so many adaptations for living in water very quickly: a fish-like body and tail fin, giving birth to live young rather than laying eggs, and lots of different feeding styles.

"Because of this we expected to see a rapid evolution early after ichthyosaurs first appeared, but we were staggered by just how big this early burst was and how relatively short it was."

There are over 100 known species of ichthyosaur from between 250–90 million years ago in the Mesozoic Era, when the infamous dinosaurs ruled the land and the seas were full of marine reptiles, the top predators that filled comparable roles to dolphins, orcas, and sharks in modern seas. 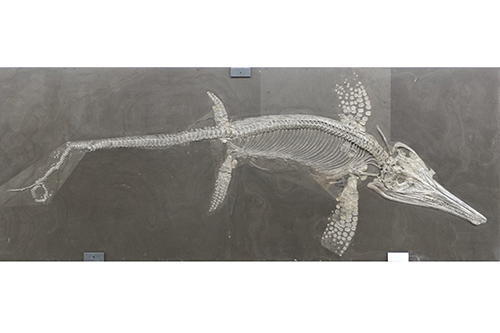 The study used state-of-the-art computational methods and looked at two types of data, one covering skull size and the other including many features of ichthyosaurs’ skeleton. All methods show an 'early burst' of evolution in ichthyosaurs, with high rates and rapid variation soon after the appearance of the group, that quickly diminishes later on.

Co-author Dr Tom Stubbs said: "Ichthyosaurs really dominated early in the Triassic (252–201 million years ago), rapidly evolving in an ocean with few predators soon after the largest known mass extinction in Earth’s history. However, the seas quickly became more crowded and competitive, and ichthyosaurs lost their top position in the Jurassic (201–145 million years ago) to other marine reptiles like plesiosaurs and pliosaurs.

"It may well have been the ichthyosaurs’ decreasing evolutionary rates which made them less able to adapt quickly, and therefore less diverse and competitive, allowing other marine reptiles to take over as the top predators."

The huge ichthyosaur Temnodontosaurus from the Early Jurassic of Germany. This specimen is about 7 m long, but other ichthyosaurs grew up to 21 metres 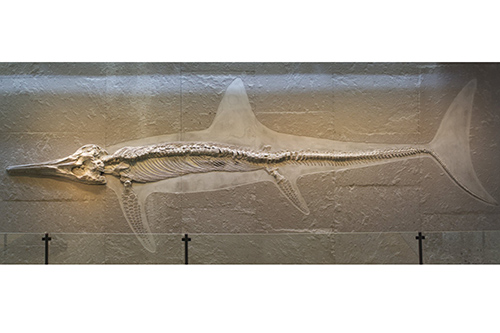 Despite slower evolution and going through a bottleneck at the end of the Triassic period, ichthyosaurs remained a common group but had less variation between them. These are perhaps best known ichthyosaurs, found in several UK locations, including Lyme Regis in Dorset, and first collected by Mary and Joseph Anning.

Dr Ben Moon added: "Even though ichthyosaurs were evolving more slowly in their last 100 million years, they are still known from many species, but with less variety between them.

"It's possible that we might find more ichthyosaurs out there that buck this trend, but it seems that this lack of variety was eventually the cause of their extinction when global conditions became less favorable around 90 million years ago. Ichthyosaurs were simply unable to adapt."