Using ESO’s Very Large Telescope (VLT), astronomers have captured the unprecedented dimming of Betelgeuse, a red supergiant star in the constellation of Orion. The stunning new images of the star’s surface show not only the fading red supergiant but also how its apparent shape is changing.

The red supergiant star Betelgeuse, in the constellation of Orion, has been undergoing unprecedented dimming. This stunning image of the star’s surface, taken with the SPHERE instrument on ESO’s Very Large Telescope late last year, is among the first observations to come out of an observing campaign aimed at understanding why the star is becoming fainter. When compared with the image taken in January 2019, it shows how much the star has faded and how its apparent shape has changed. 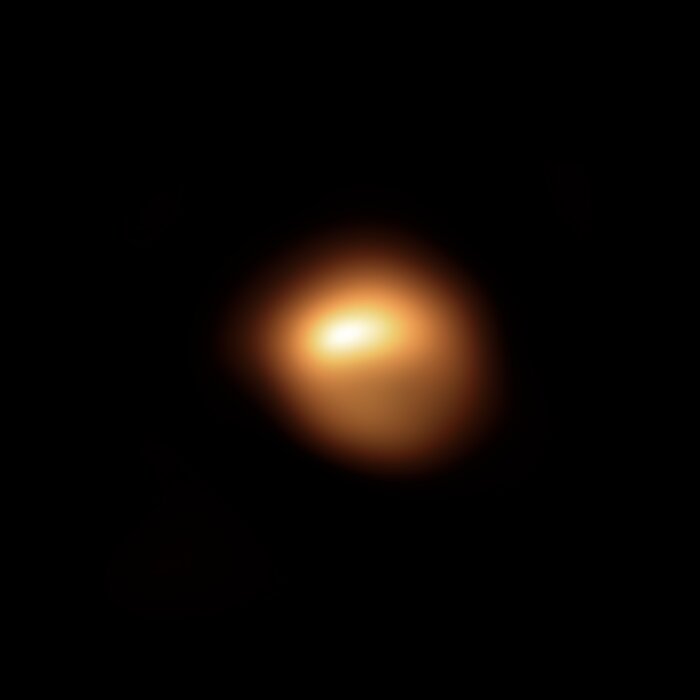 Betelgeuse has been a beacon in the night sky for stellar observers but it began to dim late last year. At the time of writing Betelgeuse is at about 36% of its normal brightness, a change noticeable even to the naked eye. Astronomy enthusiasts and scientists alike were excitedly hoping to find out more about this unprecedented dimming.

The red supergiant star Betelgeuse, in the constellation of Orion, has been undergoing unprecedented dimming. This stunning image of the star’s surface was taken with the SPHERE instrument on ESO’s Very Large Telescope in January 2019, before the star started to dim. When compared with the image taken in December 2019, it shows how much the star has faded and how its apparent shape has changed. 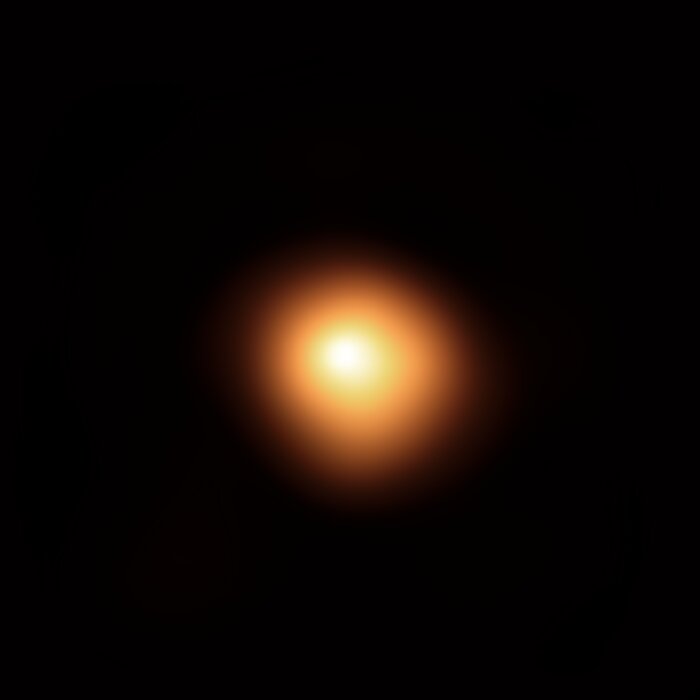 A team led by Miguel Montargès, an astronomer at KU Leuven in Belgium, has been observing the star with ESO's Very Large Telescope since December, aiming to understand why it’s becoming fainter. Among the first observations to come out of their campaign is a stunning new image of Betelgeuse’s surface, taken late last year with the SPHERE instrument.

This video shows the star Betelgeuse before and after its unprecedented dimming. The observations, taken with the SPHERE instrument on ESO’s Very Large Telescope in January and December 2019, show how much the star has faded and how its apparent shape has changed.

The team also happened to observe the star with SPHERE in January 2019, before it began to dim, giving us a before-and-after picture of Betelgeuse. Taken in visible light, the images highlight the changes occurring to the star both in brightness and in apparent shape.

This comparison image shows the star Betelgeuse before and after its unprecedented dimming. The observations, taken with the SPHERE instrument on ESO’s Very Large Telescope in January and December 2019, show how much the star has faded and how its apparent shape has changed. 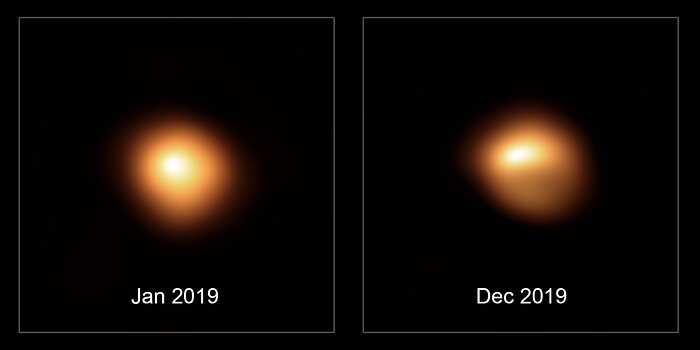 Many astronomy enthusiasts wondered if Betelgeuse’s dimming meant it was about to explode. Like all red supergiants, Betelgeuse will one day go supernova, but astronomers don’t think this is happening now. They have other hypotheses to explain what exactly is causing the shift in shape and brightness seen in the SPHERE images. “The two scenarios we are working on are a cooling of the surface due to exceptional stellar activity or dust ejection towards us,” says Montargès [1]. “Of course, our knowledge of red supergiants remains incomplete, and this is still a work in progress, so a surprise can still happen.”

This video takes the viewer from the surroundings of Betelgeuse, recently observed with the VISIR instrument on ESO’s Very Large Telescope (VLT), to its surface, which has been imaged by SPHERE on the VLT. The VISIR image shows the infrared light being emitted by the dust surrounding Betelgeuse in December 2019. The SPHERE image shows Betelgeuse’s visible surface, which has a size close to the orbit of Jupiter, in the same month.

Montargès and his team needed the VLT at Cerro Paranal in Chile to study the star, which is over 700 light-years away, and gather clues on its dimming. “ESO's Paranal Observatory is one of few facilities capable of imaging the surface of Betelgeuse,” he says. Instruments on ESO’s VLT allow observations from the visible to the mid-infrared, meaning astronomers can see both the surface of Betelgeuse and the material around it. “This is the only way we can understand what is happening to the star.”

This image, obtained with the VISIR instrument on ESO’s Very Large Telescope, shows the infrared light being emitted by the dust surrounding Betelgeuse in December 2019. The clouds of dust, which resemble flames in this dramatic image, are formed when the star sheds its material back into space. The black disc obscures the star's centre and much of its surroundings, which are very bright and must be masked to allow the fainter dust plumes to be seen. The orange dot in the middle is the SPHERE image of Betelgeuse’s surface, which has a size close to that of Jupiter’s orbit. 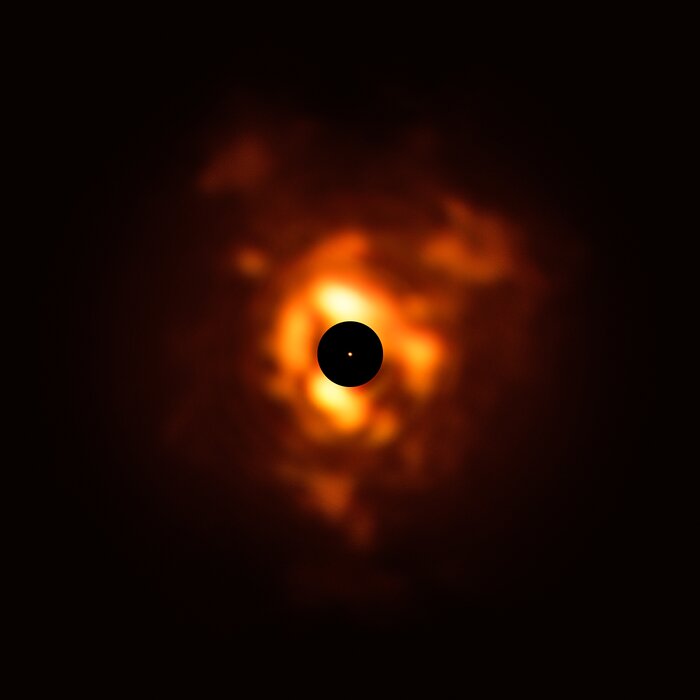 Another new image, obtained with the VISIR instrument on the VLT, shows the infrared light being emitted by the dust surrounding Betelgeuse in December 2019. These observations were made by a team led by Pierre Kervella from the Observatory of Paris in France who explained that the wavelength of the image is similar to that detected by heat cameras. The clouds of dust, which resemble flames in the VISIR image, are formed when the star sheds its material back into space.

This artist’s impression shows the supergiant star Betelgeuse as it was revealed thanks to different state-of-the-art techniques on ESO’s Very Large Telescope, which allowed two independent teams of astronomers to obtain the sharpest ever views of the supergiant star Betelgeuse. They show that the star has a vast plume of gas almost as large as our Solar System and a gigantic bubble boiling on its surface. These discoveries provide important clues to help explain how these mammoths shed material at such a tremendous rate. The scale in units of the radius of Betelgeuse as well as a comparison with the Solar System is also provided.

“The phrase ‘we are all made of stardust’ is one we hear a lot in popular astronomy, but where exactly does this dust come from?” says Emily Cannon, a PhD student at KU Leuven working with SPHERE images of red supergiants. “Over their lifetimes, red supergiants like Betelgeuse create and eject vast amounts of material even before they explode as supernovae. Modern technology has enabled us to study these objects, hundreds of light-years away, in unprecedented detail giving us the opportunity to unravel the mystery of what triggers their mass loss.”
Notes

[1] Betelgeuse's irregular surface is made up of giant convective cells that move, shrink and swell. The star also pulsates, like a beating heart, periodically changing in brightness. These convection and pulsation changes in Betelgeuse are referred to as stellar activity.
More information

The VISIR image was obtained as part of the NEAR science demonstration observations. NEAR (Near Earths in the AlphaCen Region) is an upgrade of VISIR, which was implemented as a time-limited experiment.

ESO is the foremost intergovernmental astronomy organisation in Europe and the world’s most productive ground-based astronomical observatory by far. It has 16 Member States: Austria, Belgium, the Czech Republic, Denmark, France, Finland, Germany, Ireland, Italy, the Netherlands, Poland, Portugal, Spain, Sweden, Switzerland and the United Kingdom, along with the host state of Chile and with Australia as a Strategic Partner. ESO carries out an ambitious programme focused on the design, construction and operation of powerful ground-based observing facilities enabling astronomers to make important scientific discoveries. ESO also plays a leading role in promoting and organising cooperation in astronomical research. ESO operates three unique world-class observing sites in Chile: La Silla, Paranal and Chajnantor. At Paranal, ESO operates the Very Large Telescope and its world-leading Very Large Telescope Interferometer as well as two survey telescopes, VISTA working in the infrared and the visible-light VLT Survey Telescope. Also at Paranal ESO will host and operate the Cherenkov Telescope Array South, the world’s largest and most sensitive gamma-ray observatory. ESO is also a major partner in two facilities on Chajnantor, APEX and ALMA, the largest astronomical project in existence. And on Cerro Armazones, close to Paranal, ESO is building the 39-metre Extremely Large Telescope, the ELT, which will become “the world’s biggest eye on the sky”.