Imperial College London researchers have invented a new health tracking sensor for pets and people that monitors vital signs through fur or clothing.

The new type of sensor, which can detect vital signs like heart and breathing rates through fur and up to four layers of clothing, could help make everyday wearables for pets and livestock a reality.

They could help owners keep track of their pets’ health, and help vets monitor animals during surgery without the need for shaving.

They could even help improve the work of sniffer dogs used to detect bombs and missing persons.

In people, they could provide a new way to measure vital signs that can provide measurements over clothing without direct contact with the skin.

Lead author Dr Firat Guder, of Imperial’s Department of Bioengineering, said: “Wearables are expected to play a major role in monitoring health and detecting diseases early. Our stretchy, flexible invention heralds a whole new type of sensor that can track the health of animals and humans alike over fur or clothing.”

The research on this new class of sensors is published today in Advanced Functional Materials.

Bomb sniffing dog with the sensor and its results

The sensor works like a watery, squishy stethoscope, filling any gaps between it and its subject so no air bubbles are present to dampen the sound.Yasin CoturDepartment of Bioengineering

Unlike in humans, for whom there are many fitness tracking devices, there aren’t currently many ‘wearable’ options for pets and other animals. The researchers suggest that one reason for this is that current trackers cannot monitor vital signs through fur.

The new Imperial-developed device is made of a silicone-water composite material which houses a microphone that picks up sound waves, like a watery, squishy stethoscope. It is flexible and stretchy enough that it tightly moulds to the shape of the fur, clothing, or body part it is placed on, squeezing out any sound-sucking air bubbles and preventing them from re-forming.

First author Yasin Cotur, also of Imperial’s Department of Bioengineering, said: “The sensor works like a watery, squishy stethoscope, filling any gaps between it and its subject so no air bubbles are present to dampen the sound.”

The sound is converted to a digital signal which is then transmitted to a nearby portable computer so that people can track an animal’s physiology in real-time.

When the researchers tested their device on five humans and one dog, they found that it works through up to four layers of clothes, and that the sensor works best when the clothing or fur sits right up against the skin.

The making of the sensor, using silicone, water, microphone, and a mold. 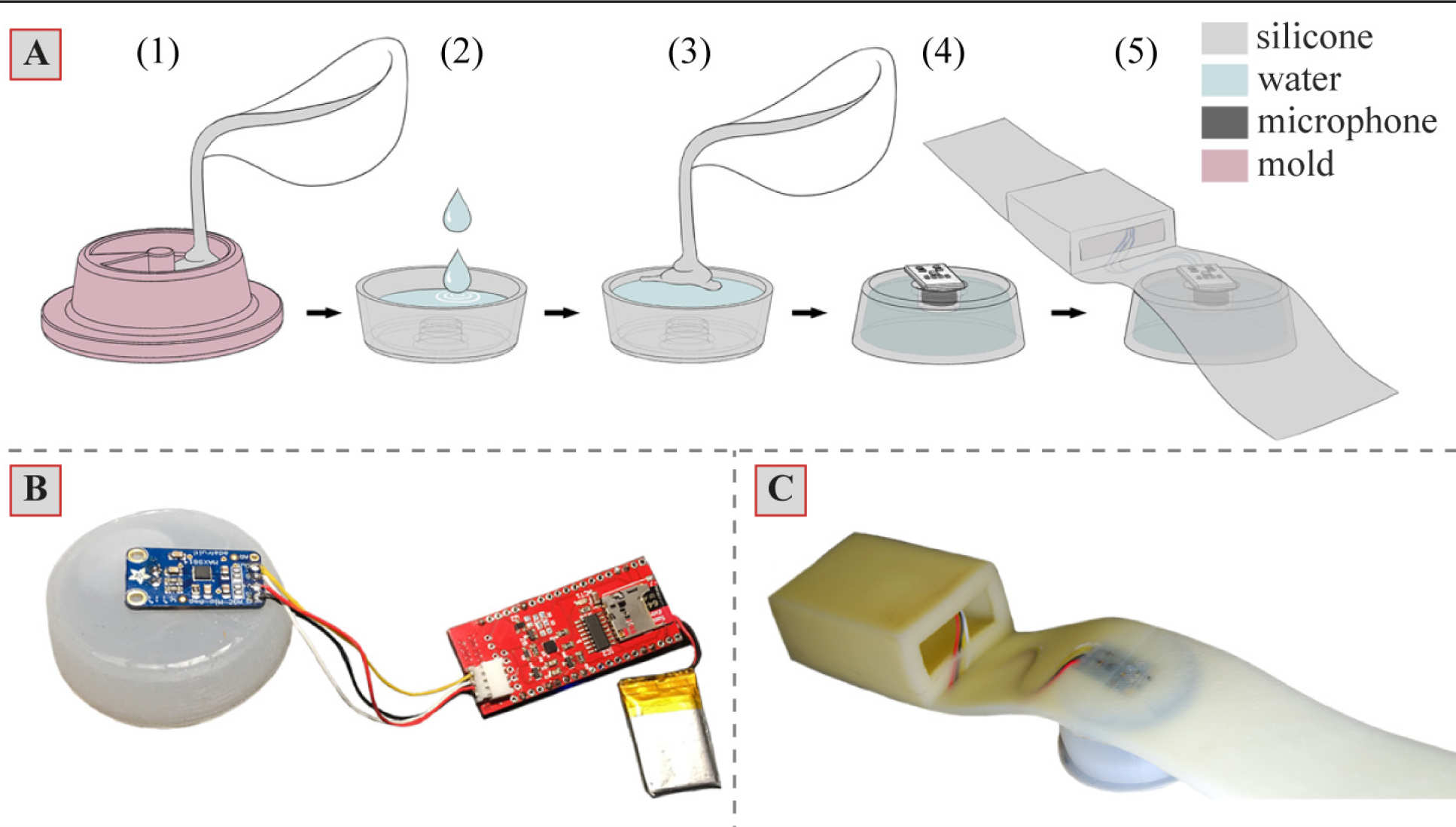 As well as health tracking, the researchers say the sensors could help turn findings from sniffer dogs into measurable data.

Sniffer dogs are trained to exhibit behaviours like sitting or barking when they detect a target object such as an explosive device or person stuck inside rubble following an earthquake.

When dogs ‘alert’ to target objects, such as bombs, their heart and breathing rates increase because they are excited to be rewarded for correctly identifying their target.

Dogs can be trained to sniff out bombs, drugs, and cadavers 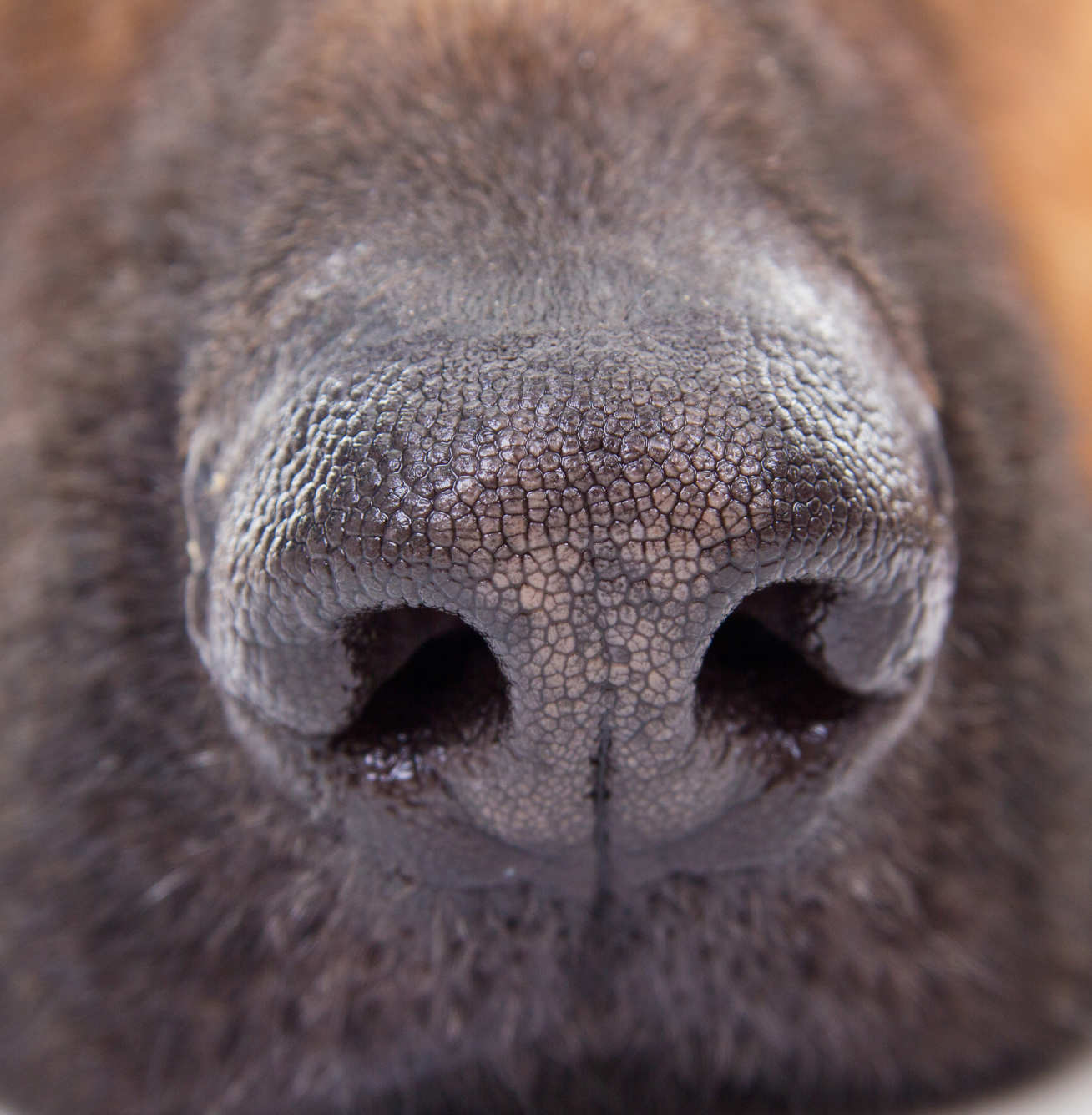 However, ‘alerting’ behaviour can be difficult to quantitatively measure.

The researchers say their new sensor could establish baselines of normal heart and breathing rates from which to quantify the level of excitement for each dog. This would be measured by how much their vital signs diverge from the norm.

By measuring how excited the dogs are, an inbuilt algorithm might even be able to tell the strength of the dog’s reaction to the smell it detects and work out how ‘sure’ the dog is of finding the desired object.

The sensors have been tested only on dogs and humans so far, but the researchers will next try to adapt them for use on other types of pets, as well as horses and livestock.

Yasin said: “The next step is to validate our system further with animals, primarily focusing on sniffer dogs and then horses and livestock later on.”

They are also integrating motion sensors to the system so they can track animals’ movements in real time. The software could use an artificial intelligent algorithm to indicate when pets are standing, sitting, or lying, as well as which direction they are facing and how their vital signs diverge from the norm. This could hook up to a smartphone app that will tell owners how, and where, their pets are in real time.

The research was funded by the Imperial Institute for Security Science and Technology Champions Fund, Engineering and Physical Sciences Research Council, and Wellcome Trust.