Agricultural crops dispersed across Eurasia more than five millennia ago, causing significant cultural change in human populations across the ancient world. New discoveries in the Altai Mountains illustrate that this process occurred earlier than believed.

Cereals from the Fertile Crescent and broomcorn millet from northern China spread across the ancient world, integrating into complex farming systems that used crop-rotation cycles enabled by the different ecological regions of origin. The resulting productivity allowed for demographic expansions and imperial formation in Europe and Asia. In this study, an international, interdisciplinary team of scientists illustrate that people moved these crops across Eurasia earlier than previously realized, adapting cultivation methods for harsh agricultural environments.

Most people are familiar with the historical Silk Road, but fewer people realize that the exchange of items, ideas, technology, and human genes through the mountain valleys of Central Asia started almost three millennia before organized trade networks formed. These pre-Silk Road exchange routes played an important role in shaping human cultural developments across Europe and Asia, and facilitated the dispersal of technologies such as horse breeding and metal smelting into East Asia. One of the most impactful effects of this process of ancient cultural dispersal was the westward spread of northeast Asian crops and the eastward spread of southwest Asian crops. However, until the past few years, a lack of archaeobotanical studies in Central Asia left a dearth of data relating to when and how this process occurred.


Low-investment farming homesteads still exist across the Central Asian mountains. In many cases, such as in this high-elevation river valley in the Pamir Mountains, farmers take advantage of microenvironmental pockets, planting small fields in well-watered river valleys where crops are also protected from cold winds and frosts. 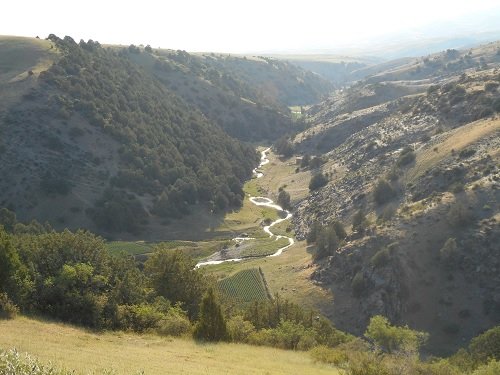 This new study, led by scientists from the Chinese Academy of Sciences and the Max Planck Institute for the Science of Human History, provides details of recently recovered ancient grains from the far northern regions of Inner Asia. Radiocarbon dating shows that the grains include the oldest examples of wheat and barley ever recovered this far north in Asia, pushing back the dates for early farming in the region by at least a millenium. These are also the earliest domesticated plants reported from the northern half of Central Asia, the core of the ancient exchange corridor. This study pulls together sedimentary pollen and ancient wood charcoal data with archaeobotanical remains from the Tiangtian archaeological site in the Chinese Altai Mountains to reveal how humans cultivated crops at such northern latitudes. This study illustrates how adaptable ancient crop plants were to new ecological constraints and how human cultural practices allowed people to survive in unpredictable environments.

The Northern Dispersal of Cereal Grains

The ancient relatives of wheat and barley plants evolved to grow in the warm and dry climate of the eastern Mediterranean and southwest Asia. However, this study illustrates that ancient peoples were cultivating these grasses over five and a half thousand kilometers to the northeast of where they originally evolved to grow. In this study, Dr. Xinying Zhou and his colleagues integrate paleoenvironmental proxies to determine how extreme the ecology was around the archaeological cave site of Tangtian more than five millennia ago, at the time of its occupation. The site is located high in the Altai Mountains on a cold,dry landscape today; however, the study shows that the ecological setting around the site was slightly warmer and more humid at the time when people lived in and around this cave.


Dr. Xinying Zhou and his team from the IVPP inBeijing excavated the Tangtian Cave site during the summer of2016. 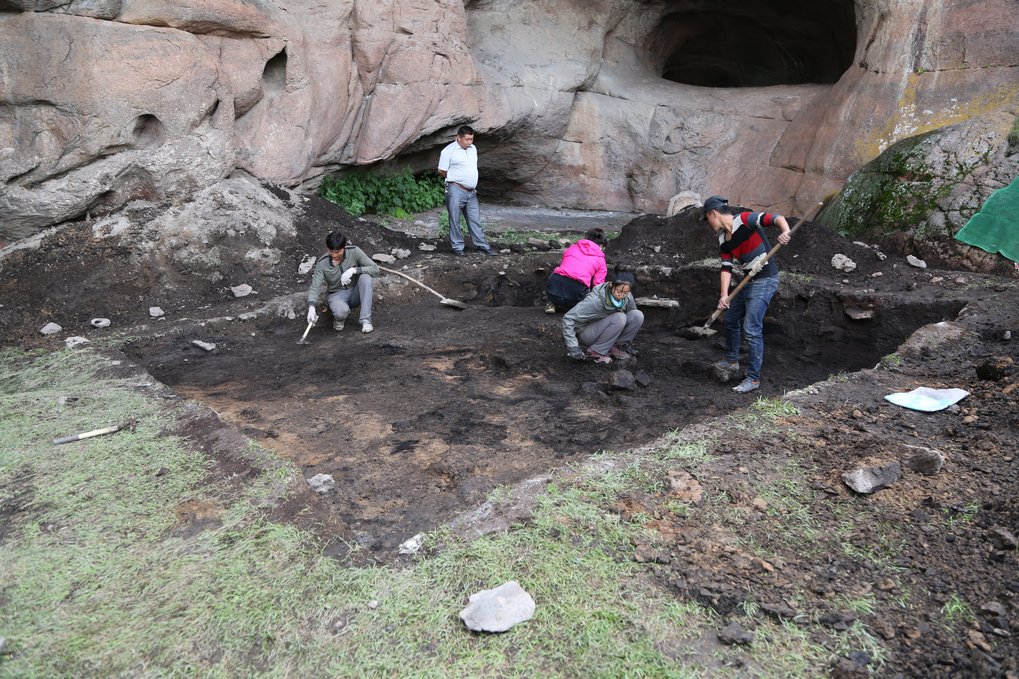 The slightly warmer regional conditions were likely the result of shifting air masses bringing warmer, wetter air from the south. In addition to early farmers using a specific regional climate pocket to grow
crops in North Asia, analysis showed that the crops they grew evolved to survive in such northern regions. The results of this study provide scholars with evidence for when certain evolutionary changes in these grasses occurred, including changes in the programed reliance of day length, which signals to the plant when to flower, and a greater resistance to cold climates.

The Trans-Eurasian Exchange and Crop Dispersal

The ancient dispersal of crops across Inner Asia has received a lot of attention from biologists and archaeologists in recent years; as Dr. Spengler, one of the study’s lead authors, discusses in his recent book Fruit from the Sands, these ancient exchange routes shaped the course of human history. The mingling of crops originating from opposite ends of Asia resulted in the crop-rotation cycles that fueled demographic growth and led to imperial formation. East Asian millets would become one of the most important crops in ancient Europe and wheat would become one of the most important crops in East Asia by the Han Dynasty. While the long tradition of rice cultivation in East Asia made rice a staple of the Asian kitchen, Chinese cuisine would be unrecognizable without wheat-based food items like steamed buns, dumplings, and noodles. The discovery that these plants dispersed across Eurasia earlier than previously understood will have lasting impacts on the study of cultivation and labor practices in ancient Eurasia, as well as the history cultural contact and shifts in culinary systems throughout time. 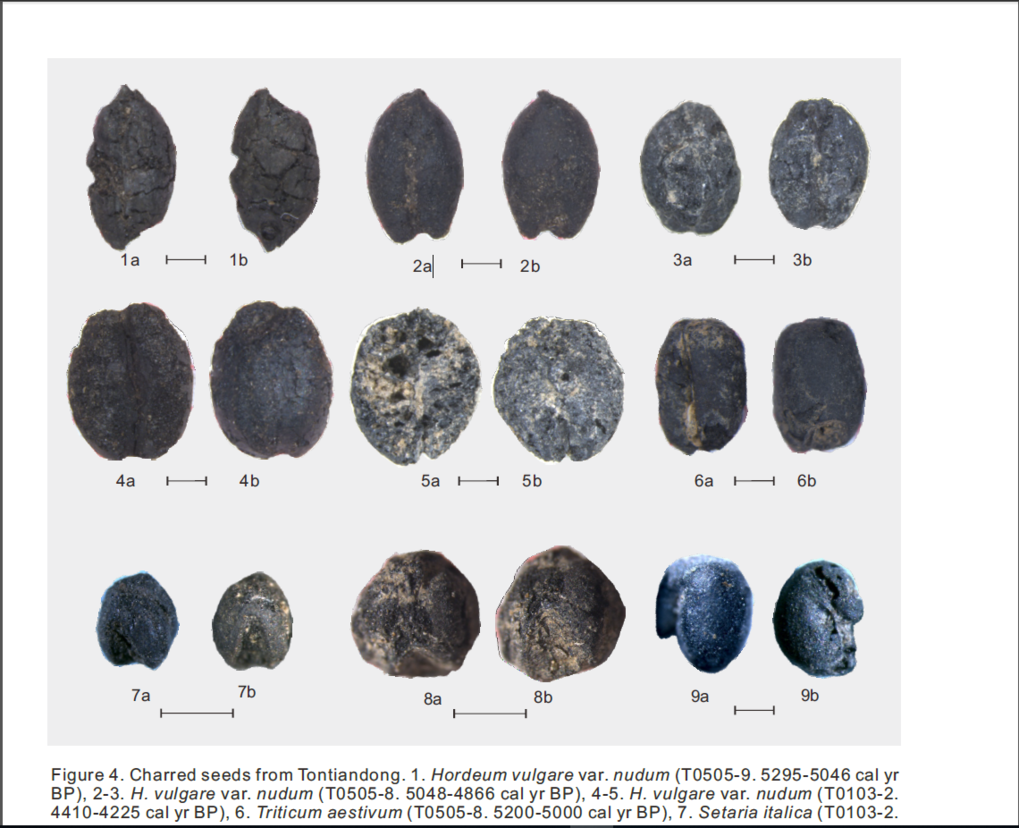 These new discoveries provide reason to question these views, and seem to suggest that mixed small-scale human populations made major contributions to world history through migration and cultural and technological exchange. “This study not only presents the earliest dates for domesticated grains in far North Asia,” says Professor Xiaoqiang Li, director of the Institute of Vertebrate Paleontology and Paleoanthropology in Beijing, “it represents the earliest beginning of a trans-Eurasian exchange that would eventually develop into the great Silk Road”.

Dr. Xinying Zhou, who headed the study and directs a research team at the IVPP in Beijing, emphasizes that “this discovery is a testament to human ingenuity and the amazing coevolutionary bond between people and the plants that they maintain in their cultivated fields.”