The early solar system was a chaotic place, with evidence indicating that Mars was likely struck by planetesimals, small protoplanets up to 1,200 miles in diameter, early in its history. Southwest Research Institute scientists modeled the mixing of materials associated with these impacts, revealing that the Red Planet may have formed over a longer timescale than previously thought.

A Southwest Research Institute team performed high-resolution, smoothed-particle simulations of a large, differentiated projectile hitting early Mars after its core and mantle had formed. The projectile’s core and mantle particles are indicated by brown and green spheres respectively, showing local concentrations of the projectile materials assimilated into the Martian mantle. 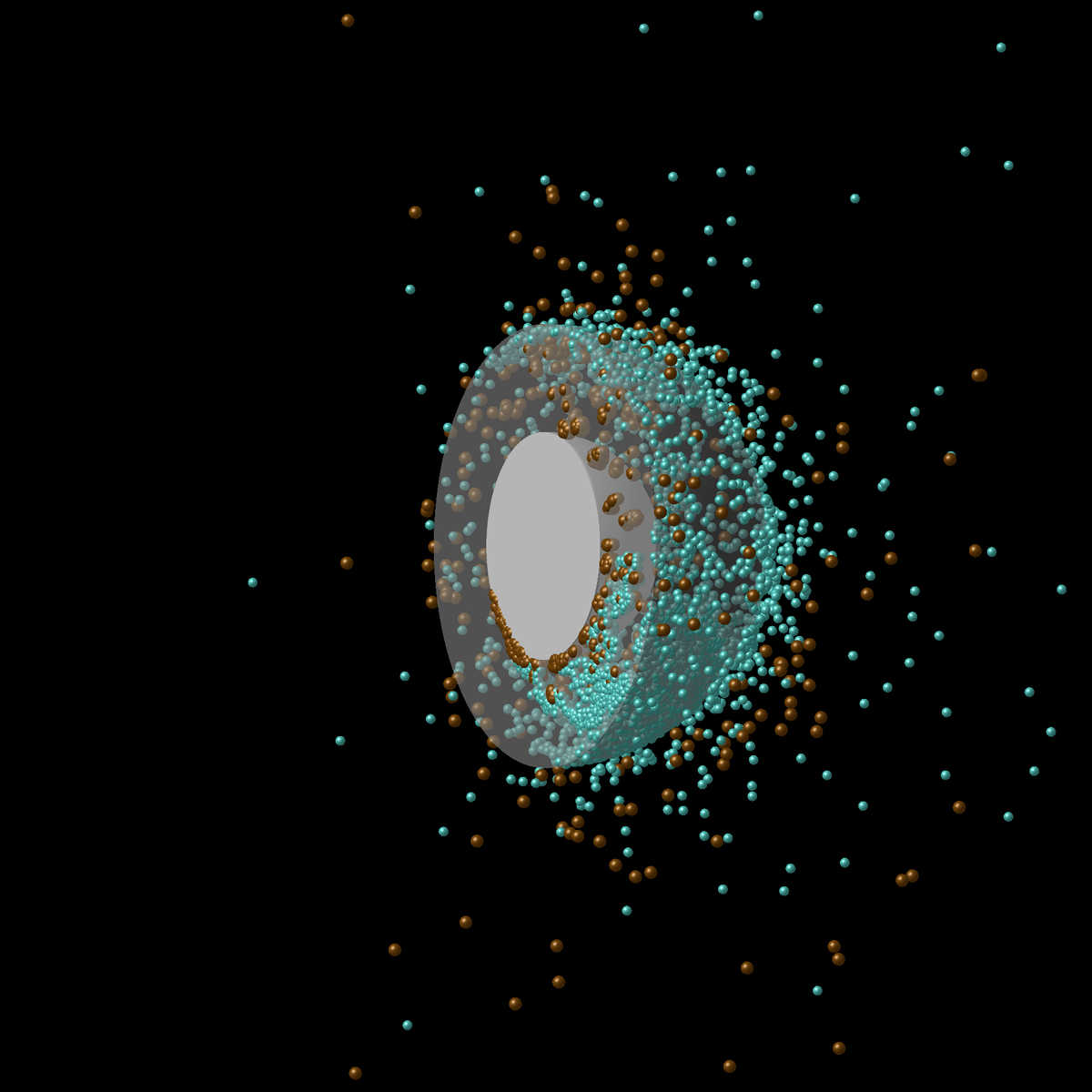 An important open issue in planetary science is to determine how Mars formed and to what extent its early evolution was affected by collisions. This question is difficult to answer given that billions of years of history have steadily erased evidence of early impact events. Luckily, some of this evolution is recorded in Martian meteorites. Of approximately 61,000 meteorites found on Earth, just 200 or so are thought to be of Martian origin, ejected from the Red Planet by more recent collisions.

These meteorites exhibit large variations in iron-loving elements such as tungsten and platinum, which have a moderate to high affinity for iron. These elements tend to migrate from a planet’s mantle and into its central iron core during formation. Evidence of these elements in the Martian mantle as sampled by meteorites are important because they indicate that Mars was bombarded by planetesimals sometime after its primary core formation ended. Studying isotopes of particular elements produced locally in the mantle via radioactive decay processes helps scientists understand when planet formation was complete.

“We knew Mars received elements such as platinum and gold from early, large collisions. To investigate this process, we performed smoothed-particle hydrodynamics impact simulations,” said SwRI’s Dr. Simone Marchi, lead author of a Science Advances paper outlining these results. “Based on our model, early collisions produce a heterogeneous, marble-cake-like Martian mantle. These results suggest that the prevailing view of Mars formation may be biased by the limited number of meteorites available for study.”

Marchi Scientists developed this illustration of how early Mars may have looked, showing signs of liquid water, large-scale volcanic activity and heavy bombardment from planetary projectiles. SwRI is modeling how these impacts may have affected early Mars to help answer questions about the planet’s evolutionary history. 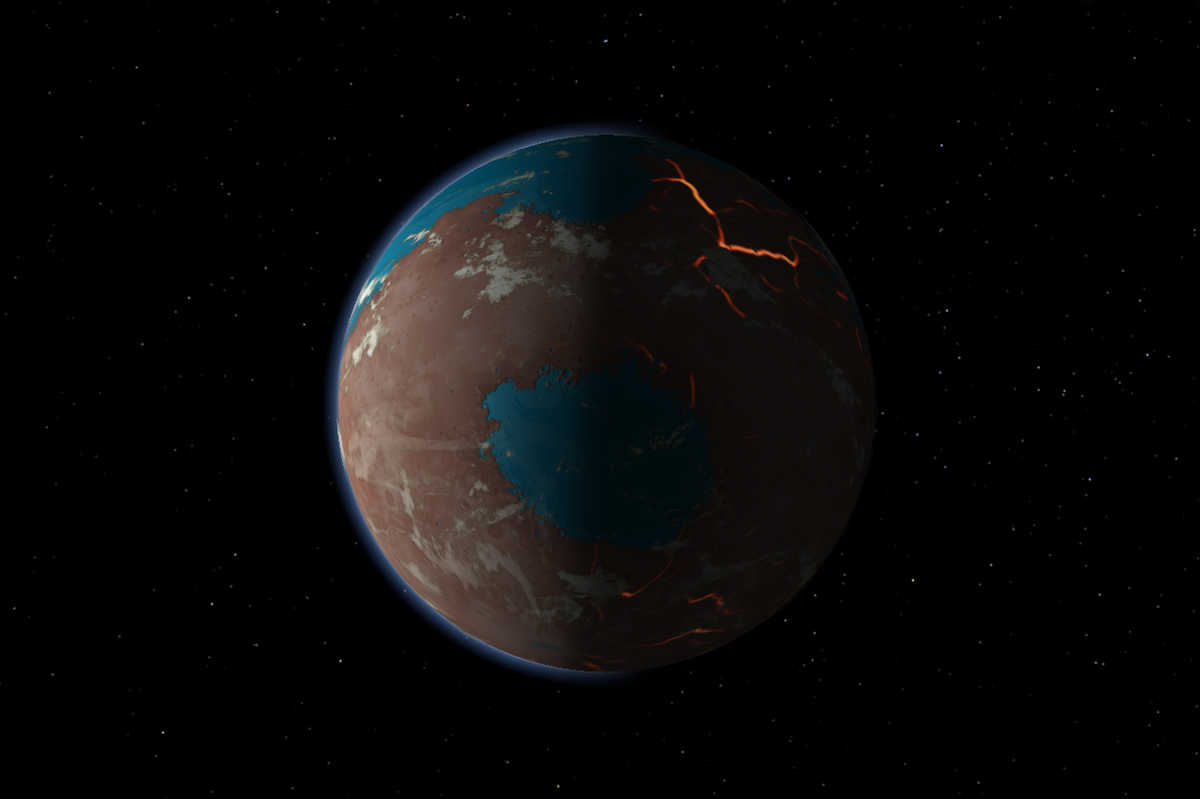 Based on the ratio of tungsten isotopes in Martian meteorites, it has been argued that Mars grew rapidly within about 2–4 million years after the Solar System started to form. However, large, early collisions could have altered the tungsten isotopic balance, which could support a Mars formation timescale of up to 20 million years, as shown by the new model.

“Collisions by projectiles large enough to have their own cores and mantles could result in a heterogeneous mixture of those materials in the early Martian mantle,” said co-author Dr. Robin Canup, assistant vice president of SwRI’s Space Science and Engineering Division. “This can lead to different interpretations on the timing of Mars’ formation than those that assume that all projectiles are small and homogenous.”

The Martian meteorites that landed on Earth probably originated from just a few localities around the planet. The new research shows that the Martian mantle could have received varying additions of projectile materials, leading to variable concentrations of iron-loving elements. The next generation of Mars missions, including plans to return samples to Earth, will provide new information to better understand the variability of iron-loving elements in Martian rocks and the early evolution of the Red Planet.

“To fully understand Mars, we need to understand the role the earliest and most energetic collisions played in its evolution and composition,” Marchi concluded.

The paper, “A compositionally heterogeneous Martian mantle due to late accretion,” will be published in Science Advances on February 12, 2020. The research was partially funded by NASA’s Solar System Exploration Research Virtual Institute and a NASA Habitable Worlds grant.