Astronomers seeking to learn about the mechanisms that formed massive black holes in the early history of the Universe have gained important new clues with the discovery of 13 such black holes in dwarf galaxies less than a billion light-years from Earth.  Roughly half of the newly-discovered black holes are not at the centers of their galaxies.

These dwarf galaxies, more than 100 times less massive than our own Milky Way, are among the smallest galaxies known to host massive black holes. The scientists expect that the black holes in these smaller galaxies average about 400,000 times the mass of our Sun.

“We hope that studying them and their galaxies will give us insights into how similar black holes in the early Universe formed and then grew, through galactic mergers over billions of years, producing the supermassive black holes we see in larger galaxies today, with masses of many millions or billions of times that of the Sun,” said Amy Reines of Montana State University.

Artist's conception of a dwarf galaxy, its shape distorted, most likely by a past interaction with another galaxy, and a massive black hole in its outskirts (pullout). The black hole is drawing in material that forms a rotating disk and generates jets of material propelled outward. 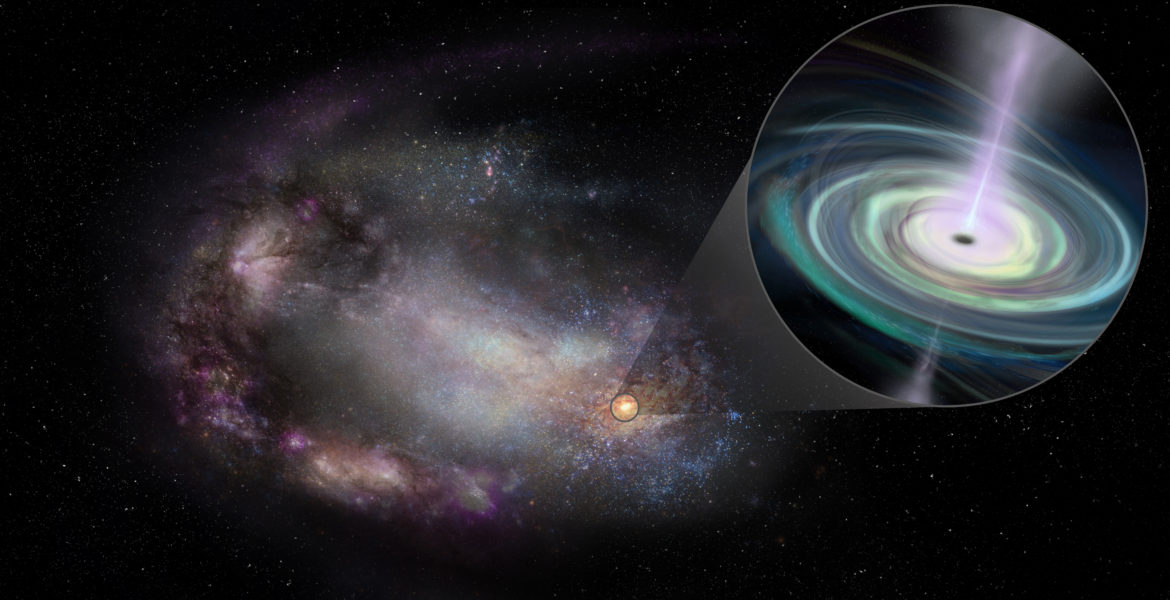 
Reines and her colleagues used the National Science Foundation’s Karl G. Jansky Very Large Array (VLA) to make the discovery, which they are reporting at the American Astronomical Society’s meeting in Honolulu, Hawaii.

Reines and her collaborators used the VLA to discover the first massive black hole in a dwarf starburst galaxy in 2011. That discovery was a surprise to astronomers and spurred a radio search for more.

The scientists started by selecting a sample of galaxies from the NASA-Sloan Atlas, a catalog of galaxies made with visible-light telescopes. They chose galaxies with stars totalling less than 3 billion times the mass of the Sun, about equal to the Large Magellanic Cloud, a small companion of the Milky Way. From this sample, they picked candidates that also appeared in the National Radio Astronomy Observatory’s Faint Images of the Radio Sky at Twenty centimeters (FIRST) survey, made between 1993 and 2011.

Artist's conception of a dwarf galaxy, its shape distorted, most likely by a past interaction with another galaxy, and a massive black hole in its outskirts (bright spot, far right; no pullout). 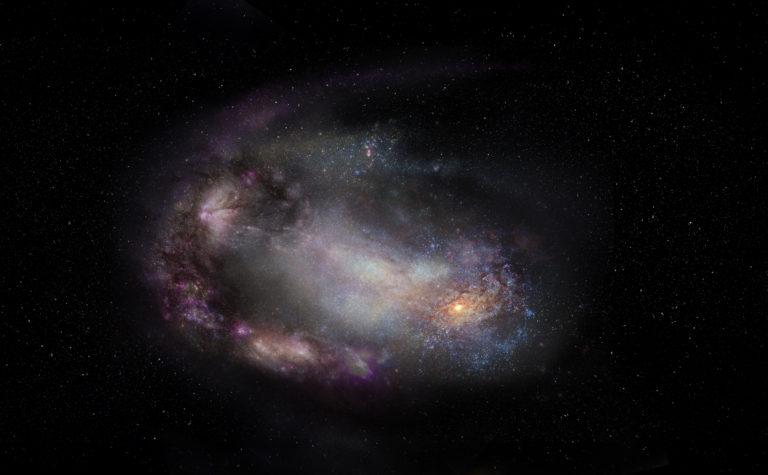 
They then used the VLA to make new and more sensitive, high-resolution images of 111 of the selected galaxies.

“The new VLA observations revealed that 13 of these galaxies have strong evidence for a massive black hole that is actively consuming surrounding material. We were very surprised to find that, in roughly half of those 13 galaxies, the black hole is not at the center of the galaxy, unlike the case in larger galaxies,” Reines said

The scientists said this indicates that the galaxies likely have merged with others earlier in their history. This is consistent with computer simulations predicting that roughly half of the massive black holes in dwarf galaxies will be found wandering in the outskirts of their galaxies.

Visible-light images of galaxies that VLA observations showed to have massive black holes. Center illustration is artist's conception of the rotating disk of material falling into such a black hole, and the jets of material propelled outward. 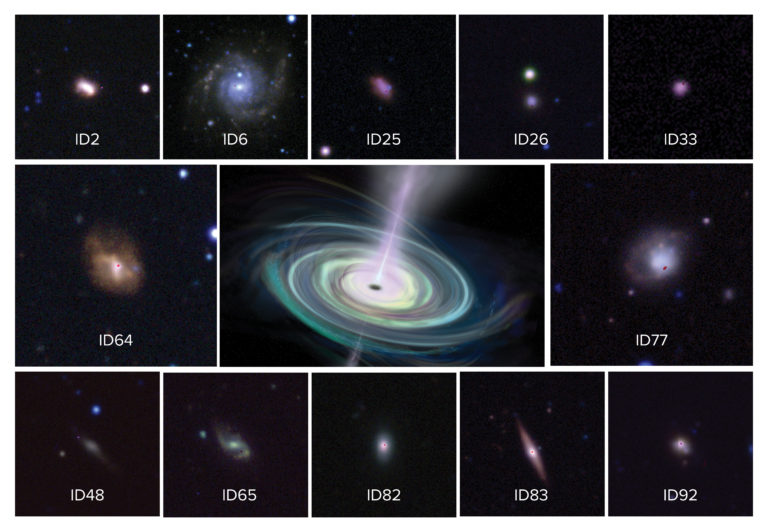 Reines worked with James Condon, of the National Radio Astronomy Observatory; Jeremy Darling, of the University of Colorado, Boulder; and Jenny Greene, of Princeton University. The astronomers are publishing their results in the Astrophysical Journal. (Preprint )