The outskirts of the Milky Way are home to the galaxy's oldest stars. But astronomers have spotted something unexpected in this celestial retirement community: a flock of young stars.  Newborn stars on the outskirts of our galaxy probably formed from material from two dwarf galaxies called the Magellanic Clouds.

A newfound cluster of young stars (blue star) sits on the periphery of the Milky Way. These stars probably formed from material originating from neighboring dwarf galaxies called the Magellanic Clouds. 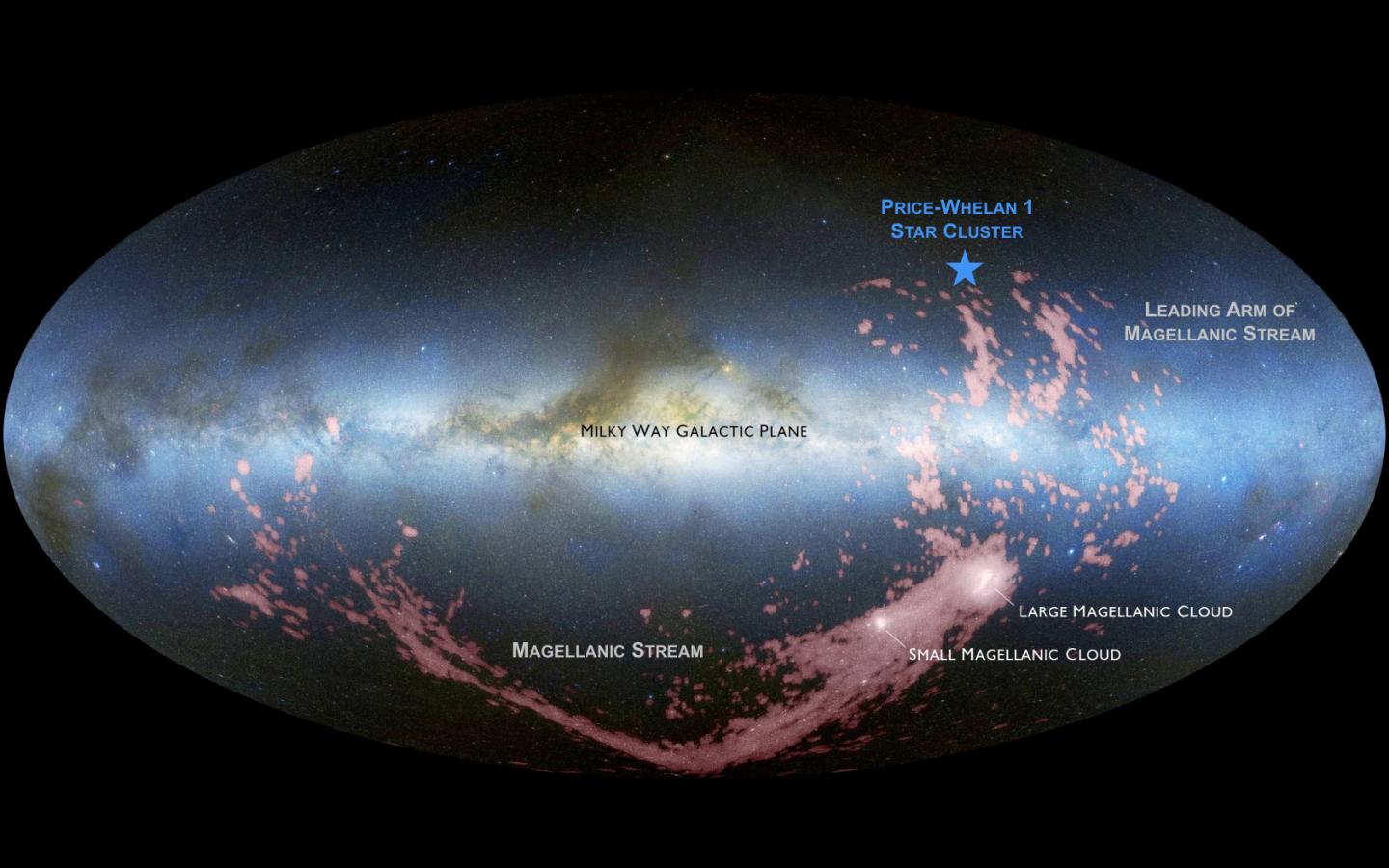 More surprising still, spectral analysis suggests that the infant stars have an extragalactic origin. The stars seemingly formed not from material from the Milky Way, but from two nearby dwarf galaxies known as the Magellanic Clouds. Those galaxies are on a collision course with our own. The discovery suggests that a stream of gas extending from the galaxies is about half as far from crashing into the Milky Way as previously thought.

"This is a puny cluster of stars -- less than a few thousand in total -- but it has big implications beyond its local area of the Milky Way," says primary discoverer Adrian Price-Whelan, a research fellow at the Flatiron Institute's Center for Computational Astrophysics in New York City. (The cluster also bears his name: Price-Whelan 1.)

Astronomers have spotted a group of young stars (blue) on the outskirts of the Milky Way. The scientists propose that these stars formed from material from two dwarf galaxies known as the Magellanic Clouds. 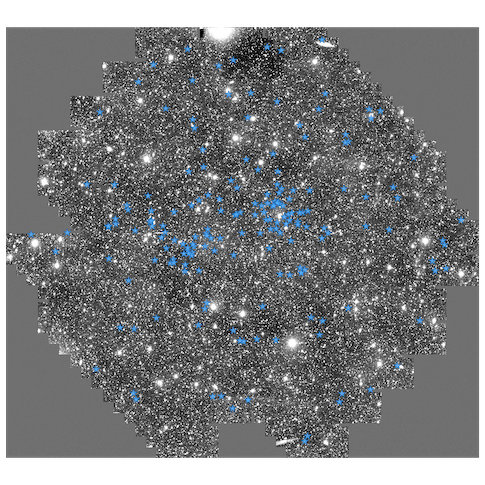 The newfound stars could reveal new insights into the Milky Way's history; they might, for example, tell if the Magellanic Clouds collided with our galaxy in the past.

Identifying clusters of stars is tricky because our galaxy is chock-full of the radiant orbs. Some stars may appear to be close together in the sky but actually sit at drastically different distances from Earth. Other stars may temporarily neighbor one another but move on in opposite directions. Determining which stars are actually clustered together requires many precise measurements over time.

Price-Whelan started with the latest data collected by the Gaia spacecraft, which has measured and cataloged the distances and motions of 1.7 billion stars. He searched the Gaia dataset for very blue stars, which are rare in the universe, and identified clumps of stars moving alongside them. After cross-matching with and removing known clusters, one remained.

The newfound cluster is relatively young at 117 million years old and is on the far outskirts of the Milky Way. "It's really, really far away," Price-Whelan says. "It's further than any known young stars in the Milky Way, which are typically in the disk. So right away, I was like, 'Holy smokes, what is this?'"

The cluster inhabits a region near a river of gas, dubbed the Magellanic Stream, that forms the outmost edge of the Large and Small Magellanic Clouds and reaches toward the Milky Way. Gas in the stream doesn't contain much metal, unlike gases in the outer reaches of the Milky Way. David Nidever, assistant professor of physics at Montana State University in Bozeman, led an analysis of the metal content of the 27 brightest stars in the cluster. Just like the Magellanic Stream, the stars contain meager levels of metal.

The stars' presence presents a unique opportunity. Gauging the distance of gas from Earth is tricky and imprecise, so astronomers weren't sure how far the Magellanic Stream was from reaching the Milky Way. The distance of stars, on the other hand, is comparatively trivial. Using the current positions and movements of stars in the cluster, the researchers predict that the edge of the Magellanic Stream is 90,000 light-years away from the Milky Way. That's roughly half the distance previously predicted.

"If the Magellanic Stream is closer, especially the leading arm closest to our galaxy, then it's likely to be incorporated into the Milky Way sooner than the current model predicts," Nidever says. "Eventually, that gas will turn into new stars in the Milky Way's disk. Right now, our galaxy is using up gas faster than its being replenished. This extra gas coming in will help us replenish that reservoir and make sure that our galaxy continues to thrive and form new stars."


Contacts and sources:
Anastasia Greenebaum
The Flatiron Institute is the research division of the Simons Foundation