Research on fossilized fish from the late Devonian period, roughly 375 million years ago, details the evolution of fins as they began to transition into limbs fit for walking on land.

Fossil cast of a fin from a juvenile Sauripterus taylori, a late Devonian fish with primitive features of tetrapods. 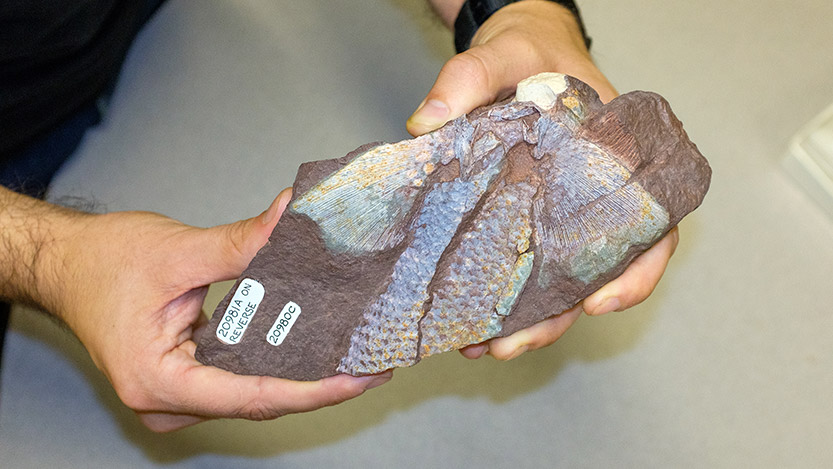 
The new study by paleontologists from the University of Chicago, published this week in the Proceedings of the National Academy of Sciences, uses CT scanning to examine the shape and structure of fin rays while still encased in surrounding rock. The imaging tools allowed the researchers to construct digital 3D models of the entire fin of the fishapod Tiktaalik roseae and its relatives in the fossil record for the first time. They could then use these models to infer how the fins worked and changed as they evolved into limbs.

Much of the research on fins during this key transitional stage focuses on the large, distinct bones and pieces of cartilage that correspond to those of our upper arm, forearm, wrist, and digits. Known as the “endoskeleton,” researchers trace how these bones changed to become recognizable arms, legs and fingers in tetrapods, or four-legged creatures.

The delicate rays and spines of a fish’s fins form a second, no less important “dermal” skeleton, which was also undergoing evolutionary changes in this period. These pieces are often overlooked because they can fall apart when the animals are fossilized or because they are removed intentionally by fossil preparators to reveal the larger bones of the endoskeleton. Dermal rays form most of the surface area of many fish fins but were completely lost in the earliest creatures with limbs.

“We’re trying to understand the general trends and evolution of the dermal skeleton before all those other changes happened and fully-fledged limbs evolved,” said Thomas Stewart, PhD, a postdoctoral researcher who led the new study. “If you want to understand how animals were evolving to use their fins in this part of history, this is an important data set.”
Seeing ancient fins in 3D

Stewart and his colleagues worked with three late Devonian fishes with primitive features of tetrapods: Sauripterus taylori, Eusthenopteron foordi and Tiktaalik roseae, which was discovered in 2006 by a team led by UChicago paleontologist Neil Shubin, PhD, the senior author of the new study. Sauripterus and Eusthenopteron were believed to have been fully aquatic and used their pectoral fins for swimming, although they may have been able to prop themselves up on the bottom of lakes and streams. Tiktaalik may have been able to support most of its weight with its fins and perhaps even used them to venture out of the water for short trips across shallows and mudflats.

“By seeing the entire fin of Tiktaalik we gain a clearer picture of how it propped itself up and moved about. The fin had a kind of palm that could lie flush against the muddy bottoms of rivers and streams,” Shubin said.

Tiktaalik roseae, a 375-million-year-old "fishapod" has features of both fish and four-legged tetrapods. 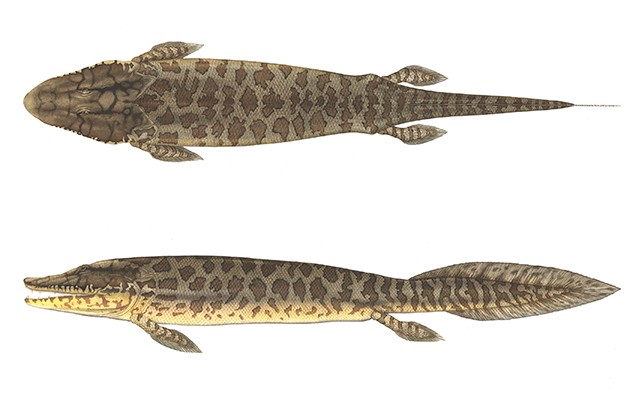 Stewart and Shubin worked with undergraduate student Ihna Yoo and Justin Lemberg, PhD, another researcher in Shubin’s lab, to scan specimens of these fossils while they were still encased in rock. Using imaging software, they then reconstructed 3D models that allowed them to move, rotate and visualize the dermal skeleton as if it were completely extracted from the surrounding material.

The models showed that the fin rays of these animals were simplified, and the overall size of the fin web was smaller than that of their fishier predecessors. Surprisingly, they also saw that the top and bottom of the fins were becoming asymmetric. Fin rays are actually formed by pairs of bones. In Eusthenopteron, for example, the dorsal, or top, fin ray was slightly larger and longer than the ventral, or bottom one. Tiktaalik’s dorsal rays were several times larger than its ventral rays, suggesting that it had muscles that extended on the underside of its fins, like the fleshy base of the palm, to help support its weight.

“This provides further information that allows us to understand how an animal like Tiktaalik was using its fins in this transition,” Stewart said. “Animals went from swimming freely and using their fins to control the flow of water around them, to becoming adapted to pushing off against the surface at the bottom of the water.”

CT images showing the dermal rays of the pectoral fin of Eusthenopteron, another late Devonian fish with primitive features of tetrapods. 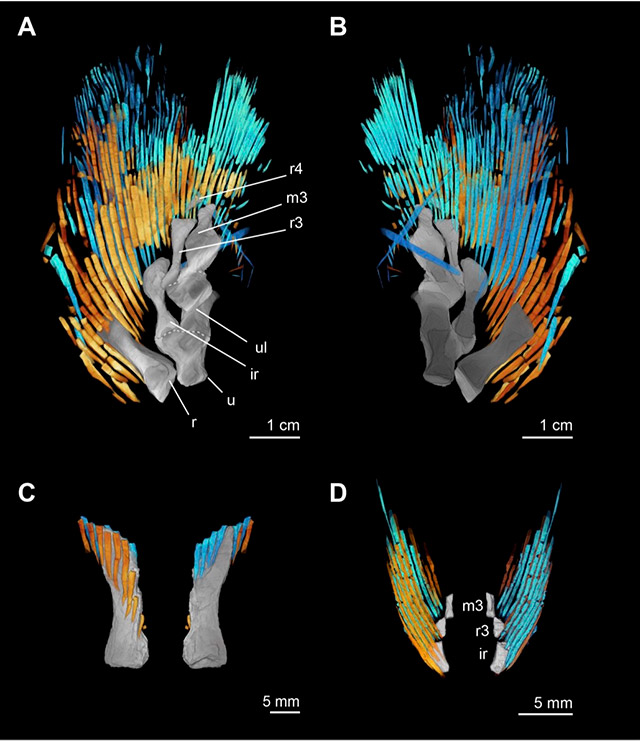 Stewart and his colleagues also compared the dermal skeletons of living fish like sturgeon and lungfish to understand the patterns they were seeing in the fossils. They saw some of the same asymmetrical differences between the top and bottom of the fins, suggesting that those changes played a larger role in the evolution of fishes.

“That gives us more confidence and another data set to say these patterns are real, widespread and important for fishes, not just in the fossil record as it relates to the fin-to-limb transition, but the function of fins broadly.”

The study, “Dorsoventral asymmetry in the dermal rays of tetrapodomorph paired fins,” was supported by the Brinson Foundation, the Academy of Natural Sciences, the University of Chicago Biological Sciences Division and the National Science Foundation. Additional authors include Natalia Taft from the University of Wisconsin — Parkside and Edward Daeschler from Drexel University.