Holding particular biological resources, the Tibetan Plateau is a unique geologic-geographic-biotic interactively unite and hence plays an important role in the global biodiversity domain. The Tibetan Plateau has undergone vigorous environmental changes since the Cenozoic, and played roles as switching from "a paradise of tropical animals and plants" to "the cradle of Ice Age mammalian fauna". ' 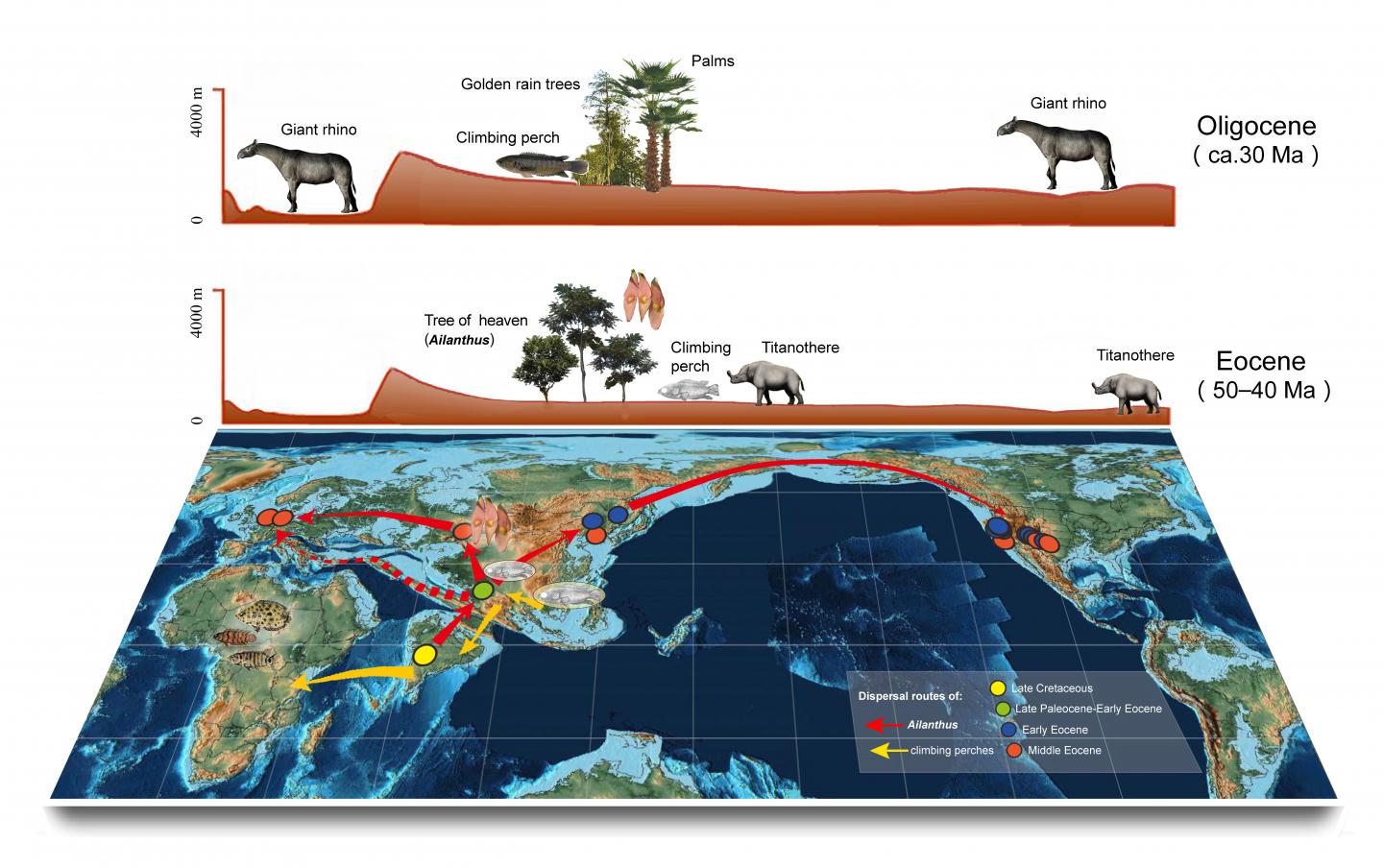 Recent significant paleontological discoveries have refined a big picture of the evolutionary history of biodiversity on that plateau against the backdrop of major environmental changes, and paved the way for the assessment of its far-reaching impact upon the biota around the plateau and even in more remote regions. Based on the newly reported fossils from the Tibetan Plateau which include diverse animals and plants, this paper presented general viewpoints of the biodiversity history on the Tibetan Plateau and its influence in a global scale.

This paper defined the Tibetan Plateau as an evolutionary junction of the history of modern biodiversity, whose performance can be categorized in the following three patterns: (1) Local origination of endemism; (2) Local origination and "Out of Tibet"; (3) Intercontinental dispersal via Tibet. 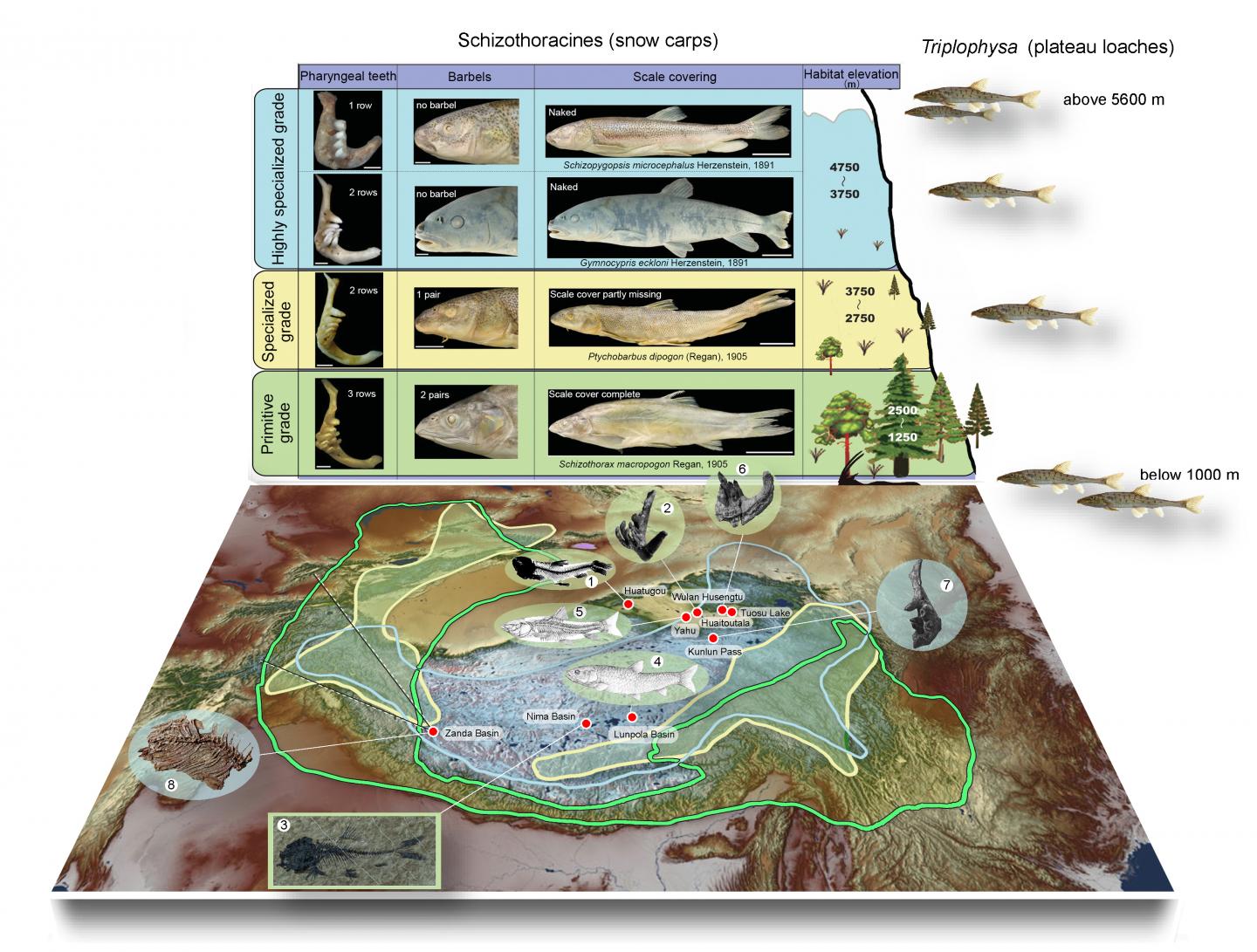 The first pattern is exemplified by the snow carps (schizothoracine fishes), the major component of the freshwater fish fauna on the plateau, whose temporal distribution pattern of the fossil schizothoracines approximately mirrors the spatial distribution pattern of their living counterparts. Through ascent with modification, their history reflects the biological responses to the stepwise uplift of the Tibetan Plateau.

The second pattern is represented by the dispersal history of some mammals since the Pliocene and some plants. The ancestors of some Ice Age mammals, e.g., the wholly rhino, Arctic fox, and argali sheep first originated and evolved in the uplifted and frozen Tibet during the Pliocene, and then migrated toward the Arctic regions or even the North American continent at beginning of the Ice Age; the ancestor of pantherines (big cats) first rose in Tibetan Plateau during the Pliocene, followed by the disperse of its descendants to other parts of Asia, Africa, North and South America to play as top predators of the local ecosystems. The early members of some plants, e.g., Elaeagnaceae appeared in Tibet during the Late Eocene and then dispersed and widely distributed to other regions.

The last pattern is typified by the history of the tree of heaven (Ailanthus) and climbing perch. Ailanthus originated in the Indian subcontinent, then colonized into Tibet after the Indian-Asian plate collision, and dispersed from the Tibetan Plateau to East Asia, Europe and even North America. The climbing perches among freshwater fishes probably rose in Southeast Asia during the Middle Eocene, dispersed to Tibet and then migrated into Africa via the docked India. These cases highlight the role of Tibet, which was involved in the continental collision, in the intercontinental biotic interchanges. The three evolutionary patterns above reflect both the history of biodiversity on the plateau as well as the biological and environmental effects of tectonic uplift.

This paper is entitled "Tibetan Plateau: An evolutionary junction for the history of modern biodiversity", with coauthors Tao Deng and Feixiang Wu from Institute of Vertebrate Paleontology and Paleoanthropology, Zhekun Zhou and Tao Su from Xishuangbanna Tropical Botanical Garden, CAS. It is published in special issue "Cenozoic mammals and plants from Tibetan Plateau and their biogeographical significance" in Science China: Earth Science.

This work was supported by the Strategic Priority Research Program of the Chinese Academy of Sciences (Grant Nos. XDB26000000, XDA20070203, XDA20070301), the Second Comprehensive Scientific Expedition on the Tibetan Plateau (Grant No. QZK0705, 2019), the National Natural Science Foundation of China (Grant Nos. 41430102, 41872006), the Frontier Science Key Research Project (Grant No. QYZDY-SSW-DQC022), the International Partnership Program (Grant No. GJHZ1885), and the Youth Innovation Promotion Association of the Chinese Academy of Sciences (Grant No. 2017103).