The shrinking of the clouds of the Great Red Spot on Jupiter has been well documented with photographic evidence from the last decade. However, researchers said there is no evidence the vortex itself has changed in size or intensity.

A (false color) series of images capturing the repeated?flaking of red clouds from the GRS in the Spring of 2019. In the earliest image, the flaking is predominant?on the east side of the giant red vortex. The flake then breaks off from the GRS, but a new flake starts to detach in the fifth image. 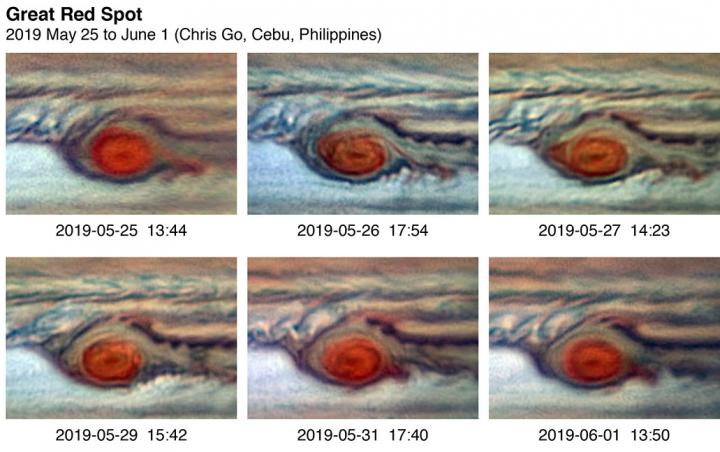 
Philip Marcus, from the University of California, Berkeley, will explain why the pictures from astronomers, both professionals and amateur, are not telling the whole story about the Great Red Spot. His session, The Shedding of Jupiter's Red Flakes Does Not Mean It Is Dying, will take place at the American Physical Society's Division of Fluid Dynamics 72nd Annual Meeting on Nov. 25 at the Washington State Convention Center in Seattle.

Marcus said the visible clouds hide the true size and nature of the vortex of the Great Red Spot. In the spring of 2019, observers photographed large red "flakes" being ripped from the familiar red spot, but Marcus said the flaking phenomena is a very natural state of a vortex with cloud coverage and not an indication of the Great Red Spot's death.

"I don't think its fortunes were ever bad," Marcus said. "It's more like Mark Twain's comment: The reports about its death have been greatly exaggerated."

Marcus discuss how smaller cloud formation bumped into the Great Red Spot, sometimes creating stagnation points, where the velocity abruptly stops, restarts and goes off in different directions. These points indicate where an approaching cloud shattered and created the flakes that were observed by astronomers.

Marcus said a secondary circulation, driven by the heating and cooling above and below the vortex, allows the Great Red Spot to continue to exist over the centuries, fighting off decay of its energy from viscosity, turbulence and heat loss.