‘Ghost’ Footprints from the Pleistocene Made Visible

Invisible footprints hiding since the end of the last ice age – and what lies beneath them – have been discovered by Cornell researchers using a special type of radar in a novel way.

The fossilized footprints reveal a wealth of information about how humans and animals moved and interacted with each other 12,000 years ago. 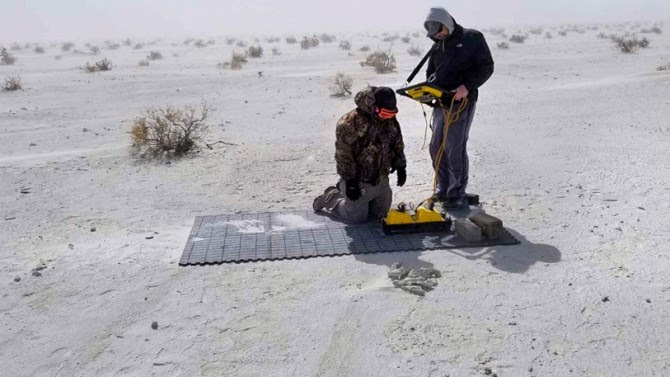 “We never thought to look under footprints,” explained paper lead author Thomas Urban, research scientist in the College of Arts and Sciences. “But it turns out that the sediment itself has a memory that records the effects of the animal’s weight and momentum in a beautiful way. It gives us a way to understand the biomechanics of extinct fauna that we never had before.”

The researchers examined the footprints of humans, mammoths and giant sloths in the White Sands National Monument in New Mexico. Using ground-penetrating radar (GPR), they were able to resolve 96% of the human tracks in the area under investigation, as well as all of the larger vertebrate tracks.

“But there are bigger implications than just this case study,” Urban said. “The technique could possibly be applied to many other fossilized footprint sites around the world, potentially including those of dinosaurs. We have already successfully tested the method more broadly at multiple locations within White Sands.”

While these “ghost” footprints can become visible for a short time after rain and when conditions are just right, “now, using geophysics methods, they can be recorded, traced and investigated in 3D to reveal Pleistocene animal and human interactions, history and mechanics in genuinely exciting new ways,” said co-author Sturt Manning, the Goldwin Smith Professor of Classical Archaeology and director of the Cornell Tree Ring Laboratory.

GPR is a nondestructive method that allows researchers to access hidden information without the need for excavation. The sensor – a kind of antenna – is dragged over the surface, sending a radio wave into the ground. The signal that bounces back gives a picture of what’s under the surface.

“The GPR response suggests that the substrate filling the prints holds more moisture than the surrounding sediment even under dry conditions, something that is evident when the tracks are excavated,” write the researchers. These effects on the sediments below and around the tracks provide information on the pressure and momentum of the foot and body making those tracks, which offers insight into the size and movement of the extinct trackmaker.

In addition to this biomechanical treasure trove of data, the GPR technique gives researchers a way to learn about what early humans did when they were not at a campsite or kill site, the two types of archaeological sites best known for this time period.

“The GPR technique gets us to the space in between [sites] and lets us see how people are tracking animals or moving around for other tasks of daily life,” Urban said. “There are very few footprint records of human-megafauna interactions. It’s really rare to have access to this kind of data from 12,000 or more years ago.”