Scientists from Germany and the United States have unveiled the results of a newly-completed, state of the art simulation of the evolution of galaxies. TNG50 is the most detailed large-scale cosmological simulation yet. It allows researchers to study in detail how galaxies form, and how they have evolved since shortly after the Big Bang. For the first time, it reveals that the geometry of the cosmic gas flows around galaxies determines galaxies’ structures, and vice versa.

Image of the optical light emitted by the stars of a spiral galaxy from the TNG50 simulation. 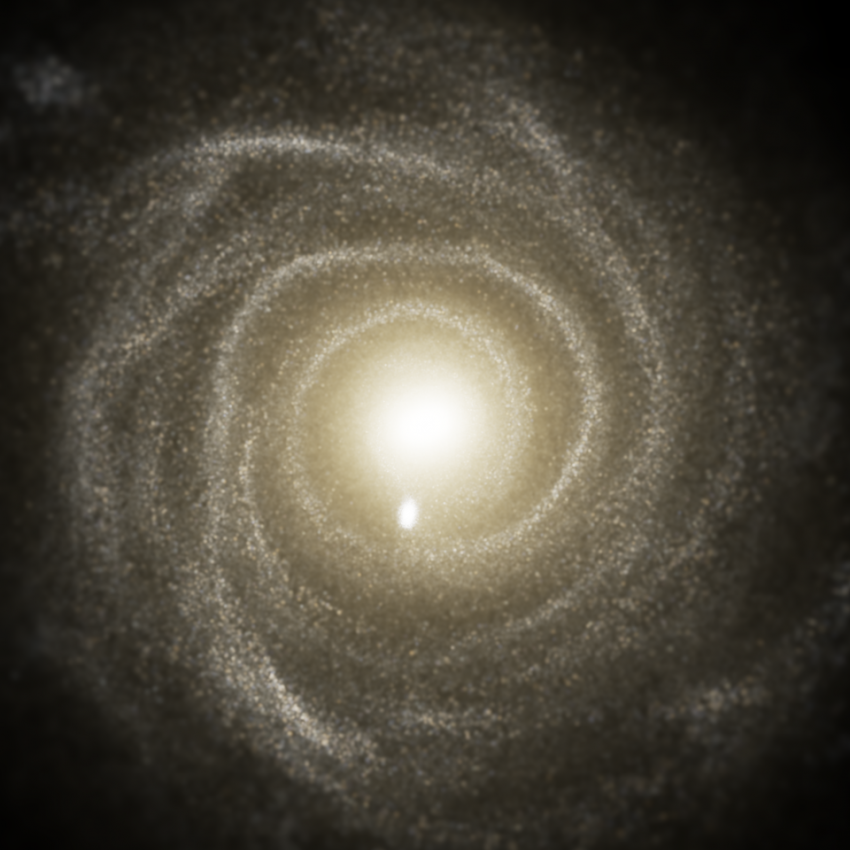 The researchers publish their results in two papers in the journal Monthly Notices of the Royal Astronomical Society.

Astronomers running cosmological simulations face a fundamental trade-off: with finite computing power, typical simulations so far have been either very detailed or have spanned a large volume of virtual space, but have so far not been able to do both. Detailed simulations with limited volumes can model no more than a few galaxies, making statistical deductions difficult. Large-volume simulations, in turn, typically lack the details necessary to reproduce many of the small-scale properties we observe in our own Universe, reducing their predictive power.

The TNG50 simulation, which has just been published, manages to avoid this trade-off. For the first time, it combines the idea of a large-scale cosmological simulation – a Universe in a box – with the computational resolution of “zoom” simulations, at a level of detail that had previously only been possible for studies of individual galaxies.


In a simulated cube of space that is more than 230 million light-years across, TNG50 can discern physical phenomena that occur on scales one million times smaller, tracing the simultaneous evolution of thousands of galaxies over 13.8 billion years of cosmic history. It does so with more than 20 billion particles representing dark (invisible) matter, stars, cosmic gas, magnetic fields, and supermassive black holes. The calculation itself required 16,000 cores on the Hazel Hen supercomputer in Stuttgart, working together, 24/7, for more than a year – the equivalent of fifteen thousand years on a single processor, making it one of the most demanding astrophysical computations to date.

The first scientific results from TNG50 are published by a team led by Dr Annalisa Pillepich (Max Planck Institute for Astronomy, Heidelberg) and Dr Dylan Nelson (Max Planck Institute for Astrophysics, Garching) and reveal unforeseen physical phenomena. According to Nelson: “Numerical experiments of this kind are particularly successful when you get out more than you put in. In our simulation, we see phenomena that had not been programmed explicitly into the simulation code. These phenomena emerge in a natural fashion, from the complex interplay of the basic physical ingredients of our model universe.”

TNG50 features two prominent examples for this kind of emergent behaviour. The first concerns the formation of “disc” galaxies like our own Milky Way. Using the simulation as a time machine to rewind the evolution of cosmic structure, researchers have seen how the well-ordered, rapidly rotating disc galaxies (which are common in our nearby Universe) emerge from chaotic, disorganised, and highly turbulent clouds of gas at earlier epochs.

As the gas settles down, newborn stars are typically found on more and more circular orbits, eventually forming large spiral galaxies – galactic carousels. Annalisa Pillepich explains: “In practice, TNG50 shows that our own Milky Way galaxy with its thin disc is at the height of galaxy fashion: over the past 10 billion years, at least those galaxies that are still forming new stars have become more and more disc-like, and their chaotic internal motions have decreased considerably. The Universe was much messier when it was just a few billion years old!”

As these galaxies flatten out, researchers found another emergent phenomenon, involving the high-speed outflows and winds of gas flowing out of galaxies. This launched as a result of the explosions of massive stars (supernovae) and activity from supermassive black holes found at the heart of galaxies. Galactic gaseous outflows are initially also chaotic and flow away in all directions, but over time, they begin to become more focused along a path of least resistance.

In the late universe, flows out of galaxies take the form of two cones, emerging in opposite directions – like two ice cream cones placed tip to tip, with the galaxy swirling at the centre. These flows of material slow down as they attempt to leave the gravitational well of the galaxy’s halo of invisible – or dark – matter, and can eventually stall and fall back, forming a galactic fountain of recycled gas. This process redistributes gas from the centre of a galaxy to its outskirts, further accelerating the transformation of the galaxy itself into a thin disc: galactic structure shapes galactic fountains, and vice versa.

The team of scientists creating TNG50 (based at Max-Planck-Institutes in Garching and Heidelberg, Harvard University, MIT, and the Center for Computational Astrophysics (CCA)) will eventually release all simulation data to the astronomy community at large, as well as to the public. This will allow astronomers all over the world to make their own discoveries in the TNG50 universe – and possibly find additional examples of emergent cosmic phenomena, of order emerging from chaos.