There's chaos in the night sky, about 60 to 600 miles above Earth's surface. Called the ionosphere, this layer of Earth's atmosphere is blasted by solar radiation that breaks down the bonds of ions. Free electrons and heavy ions are left behind, constantly colliding.

This dance was previously measured through a method called incoherent scatter radar in the northern hemisphere, where researchers beam radio wave into the ionosphere. The electrons in the atmosphere scatter the radio wave "incoherently". The different ways they scatter tell researchers about the particles populating the layer.

The Program of the Antarctic Syowa Mesosphere-Stratosphere-Troposphere/Incoherent Scatter radar (PANSY radar) consisting of an active phased array of 1045 Yagi antennas. 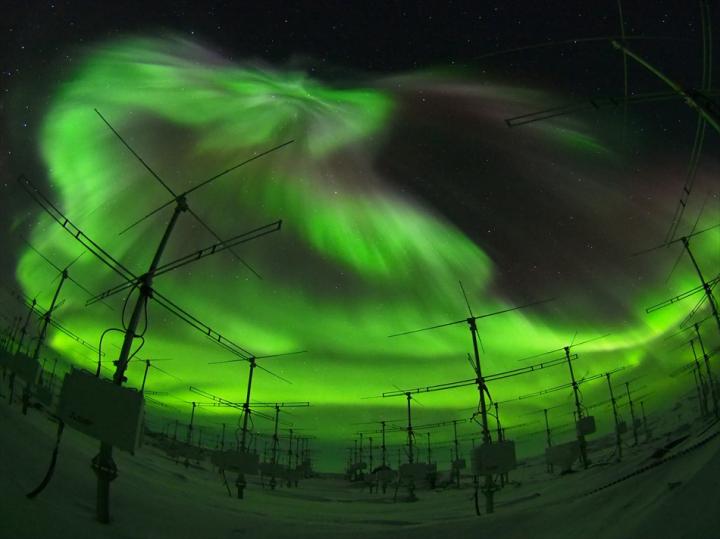 Now, researchers have used radar in Antarctica to make the first measurements from the Antarctic region. They published their preliminary results on September 17, 2019 in the Journal of Atmospheric and Oceanic Technology.

"Incoherent scatter radar is currently the most powerful tool available to investigate the ionosphere because it covers a wide altitudinal range and it observes essential ionospheric parameters such as electron density, ion velocity, ion and electron temperatures, as well as ion compositions," said Taishi Hashimoto, assistant professor at the National Institute of Polar Research in Japan. While these radars are powerful, they're also rare due to their size and power demand.

Using the Program of the Antarctic Syowa Mesosphere-Stratosphere-Troposphere/Incoherent Scatter (PANSY) radar, the largest and fine-resolution atmospheric radar in the Antarctic, researchers performed the first incoherent scatter radar observations in the southern hemisphere in 2015. They also made the first 24-hour observation in 2017. While analyzing these observations, Hashimoto and the team expected to see significant differences between the southern measurements and the northern measurements, as Earth's lower atmosphere has a strong asymmetry between hemispheres.

"Clearly, observations in the southern hemisphere are crucial to revealing global features of both the atmosphere and the ionosphere," Hashimoto said.

It's not as simple as taking the measurements, however. Consider the radar as a pebble skipped across a pond's surface. The researchers want to learn how the pebble vertically displaces the water as it skips and eventually sinks. They aren't interested in the concentric ripples created at each skip, but they're so similar that it's difficult to discern which measurements are the ones needed.

These ripples are known as field-aligned irregularities, and Hashimoto's team applied a computer program that can recognize the different signals and suppresses the irregularities that could obscure the data.

"Our next step will be the simultaneous observation of ionosphere incoherent scatter and field-aligned irregularities, since the suppression and extraction are using the same principle from different aspects," Hashimoto said. "We are also planning to apply the same technique to obtain other types of plasma parameters, such as the drive velocity and ion temperature, leading to a better understanding of auroras."