Hand-dug trenches around Leigh Lake in Grand Teton National Park in Wyoming reveal evidence for a previously unknown surface-faulting earthquake in along the Teton Fault--one occurring about 10,000 years ago.

The excavation of trench B at the Leigh Lake site. Shown in the photo (from left to right) are Glenn Thackray, Cooper Brossy, and Darren Zellman. 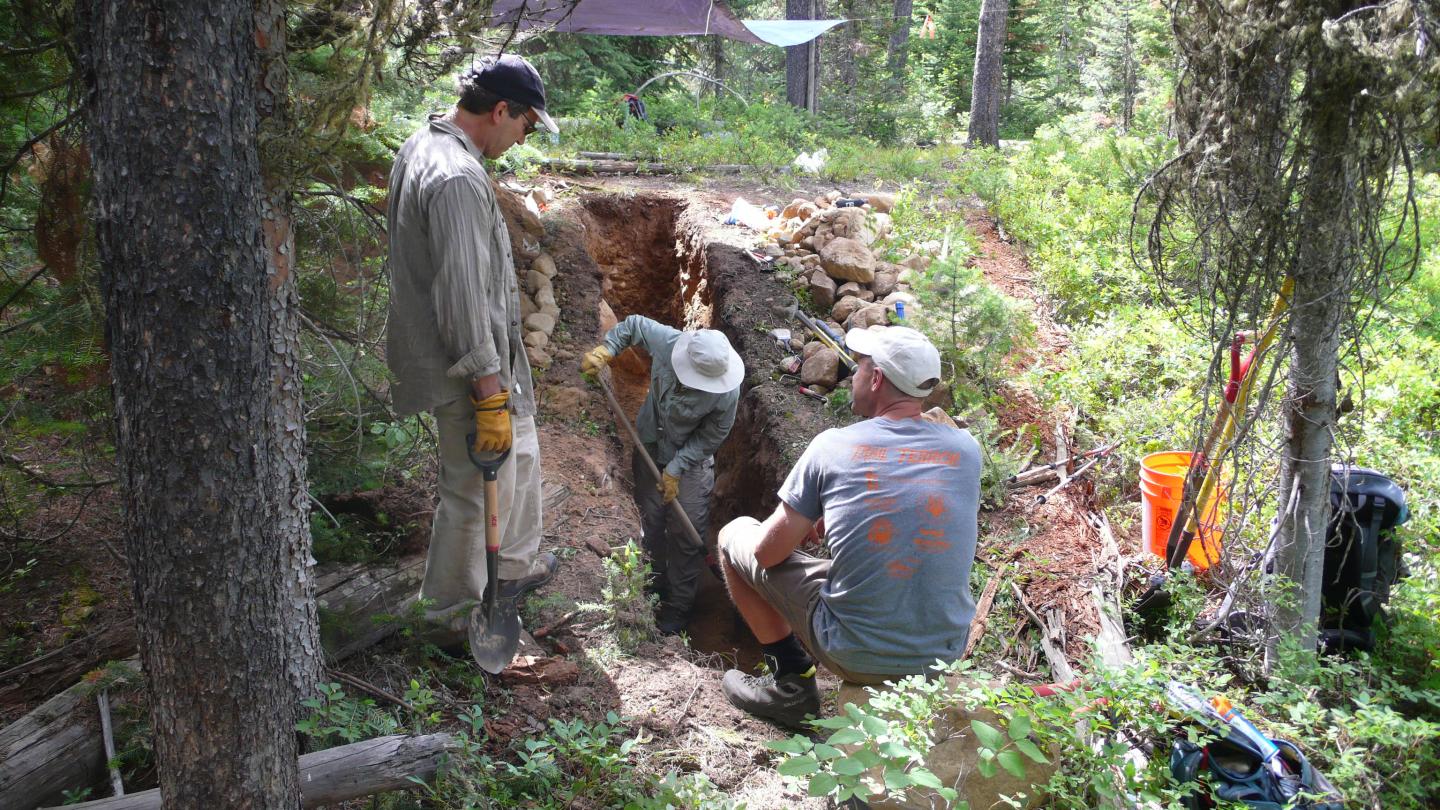 Together with evidence from the site of a second earthquake that ruptured around 5,900 years ago, the findings published in the Bulletin of the Seismological Society of America extend the history of Teton Fault earthquakes and may offer some clues as to how segments of the fault have ruptured together in the past, the study authors suggest.

The Teton Fault is one of the fastest-moving normal faults in the western United States, separating the eastern edge of the Teton Range from the Jackson Hole basin. The fault is divided into southern, central and northern segments, with the Leigh Lake site falling within the central segment. A previous study identified two Teton Fault earthquakes that occurred 8,000 years ago and 4,700 to 7,900 years ago on the southern segment at Granite Canyon, one of the most famous hiking spots in the Grand Teton National Park.

The younger earthquake at Leigh Lake may be the same rupture as the youngest Granite Canyon earthquake, confirming that there were at least three earthquakes in Holocene times, and that the most recent activity along the fault occurred about 6,000 years ago, said Mark Zellman of BGC Engineering, Inc., the lead author of the BSSA study.

Although the Leigh Lake study doesn't provide a definite answer to the question of whether multiple segments of the Teton fault have ruptured at once, Zellman said the findings "do give us a clue that multi-section ruptures are possible. The overlap in age between the youngest Leigh Lake earthquake and the youngest Granite Canyon earthquake "leaves open the possibility that at least the southern and central section of the Teton fault ruptured together during the most recent event."

Given the Teton fault's high rate of movement in the past, it has been a surprisingly long time since its last earthquake, said Zellman. "The seemingly regular and relatively short intervals of time between these three events makes the long period of quiescence on the Teton fault even more surprising," he said. "I was expecting that we would have found evidence for at least one rupture that post-dates the youngest event known from Granite Canyon."

Zellman and colleagues chose Leigh Lake as a study site because no other paleoseismic studies had been conducted previously on this central segment of the fault, and because the site offered several small and easy to reach scarps for shovel excavations. The researchers excavated at two of three scarps that represent the fault's movement in postglacial times.

The remoteness of the site and its location within a national park prevented the researchers from using heavy equipment to dig and backfill their shallow trenches. In the future, Zellman said, "it would be nice to identify a location or two where we could excavate a deeper trench to expose a longer record."

Asked about the older event at Granite Canyon that was not found at Leigh Lake, Zellman said "evidence for that earthquake might be preserved in the third scarp. But we won't know for sure until we excavate that scarp."

The researchers examined the coarse exposed sediments in the trenches for signs of past faulting, in some places analyzing the orientation of large rocks clasts within the trench walls to reveal the fault's presence. The faults were dated using radiocarbon and optically stimulated luminescence methods.

Zellman said other studies of sites along the fault's northern segment, combined with data from studies that look at landslides and other signs of paleoseismic activity contained in deep lake sediments from the region, will help further fill in the history of the Teton Fault.