El Ninos have become more intense in the industrial age, which stands to worsen storms, drought, and coral bleaching in El Nino years. A new study has found compelling evidence in the Pacific Ocean that the stronger El Ninos are part of a climate pattern that is new and strange.

It is the first known time that enough physical evidence spanning millennia has come together to allow researchers to say definitively that: El Ninos, La Ninas, and the climate phenomenon that drives them have become more extreme in the times of human-induced climate change.

On the right, satellite composition of El Nino in 1997, and on the left, El Nino in 2015. Both were extreme El Nino events that new hard evidence says are part of a new and odd climate pattern. 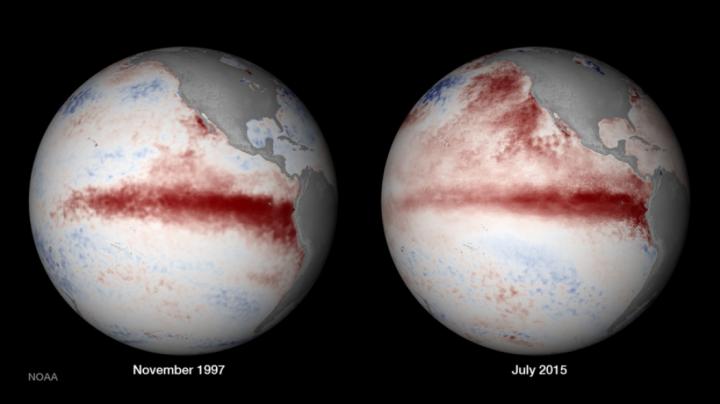 "What we're seeing in the last 50 years is outside any natural variability. It leaps off the baseline. Actually, we even see this for the entire period of the industrial age," said Kim Cobb, the study's principal investigator and professor in the Georgia Institute of Technology's School of Earth and Atmospheric Sciences. "There were three extremely strong El Nino-La Nina events in the 50-year period, but it wasn't just these events. The entire pattern stuck out."

The study's first author Pam Grothe compared temperature-dependent chemical deposits from present-day corals with those of older coral records representing relevant sea surface temperatures from the past 7,000 years. With the help of collaborators from Georgia Tech and partner research institutions, Grothe identified patterns of in the El Nino Southern Oscillation (ENSO), swings of heating and cooling of equatorial Pacific waters that, every few years, spur El Ninos and La Ninas respectively.

The team found the industrial age ENSO swings to be 25% stronger than in the pre-industrial records. The researchers published their results in the journal Geophysical Review Letters in October 2019. The work was funded by the National Science Foundation.

The evidence had slumbered in and around shallow Pacific waters, where ENSO and El Ninos originate until Cobb and her students plunged hollow drill bits into living coral colonies and fossil coral deposits to extract it. In more than 20 years of field expeditions, they collected cores that contained hundreds of records.


In scuba gear, Georgia Tech professor Kim Cobb drills into corals in the tropical Pacific with a pneumatic coring drill to take samples for studies on recent and historic sea surface temperatures. 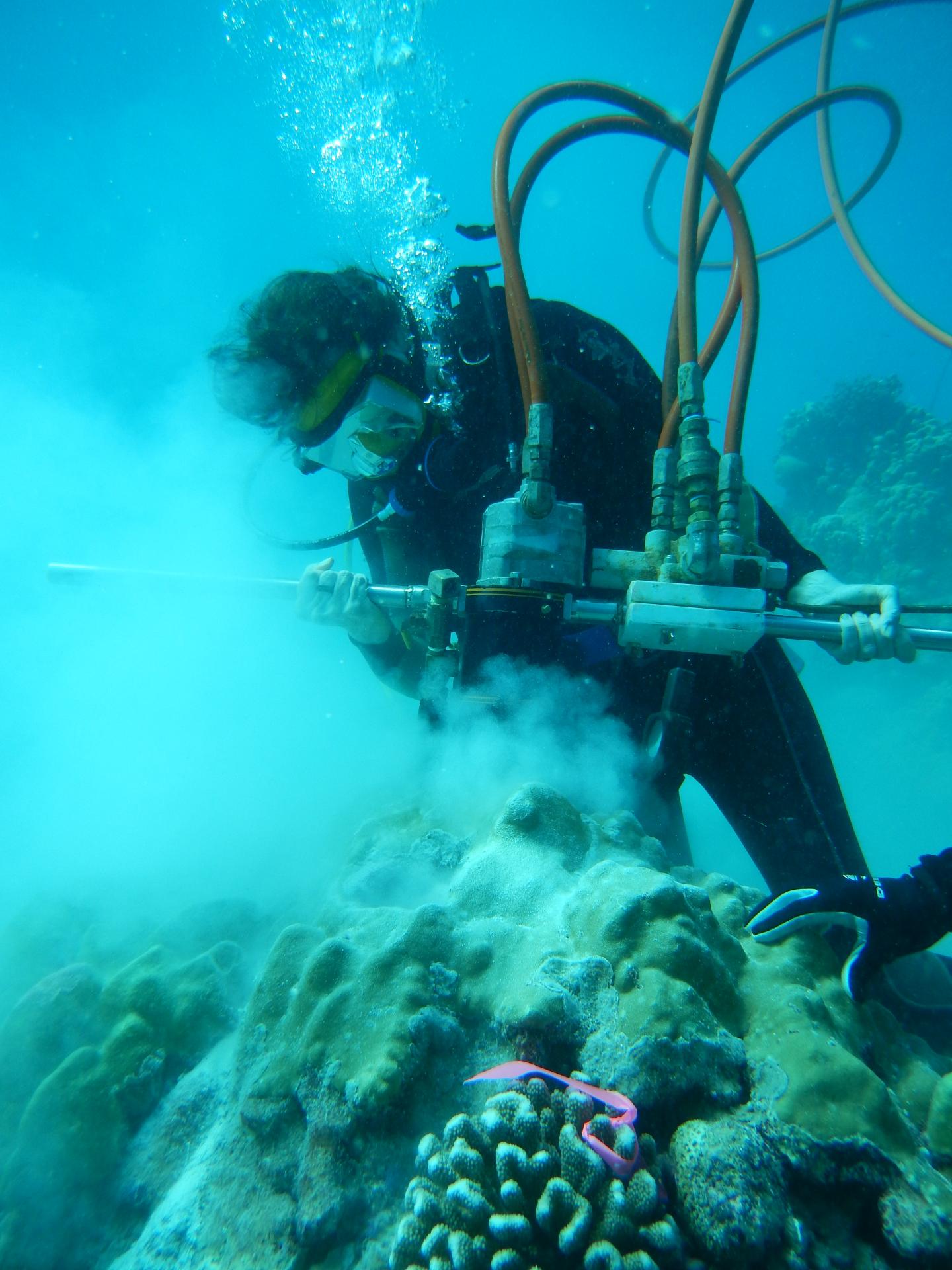 "When I present it to people, I always get asked, 'Where's the temperature measurement?' I tell them it's there, but you can't see it because the corals' records of sea surface temperatures are that good," said Grothe, a former graduate research assistant in Cobb's lab and now an associate professor at the University of Mary Washington.

In 2018, enough coral data had amassed to distinguish ENSO's recent activity from its natural preindustrial patterns.

To stress-test the data, Grothe left out chunks to see if the industrial age ENSO signal still stuck out. She removed the record-setting 1997/1998 El Nino-La Nina and examined industrial age windows of time between 30 and 100 years long.

The signal held in all windows, but the data needed the 97/98 event to be statistically significant. This could mean that changes in the ENSO activities have just now reached a threshold that makes them detectable.

What is El Nino?

Every two to seven years in spring, an El Nino is born when the warm phase of the ENSO swells into a long heat blob in the tropical Pacific, typically peaking in early winter. It blows through oceans and air around the world, ginning up deluges, winds, heat, or cold in unusual places.

Once El Nino passes, the cycle reverses into La Nina by the following fall, when airstreams push hot water westward and dredge up frigid water in the equatorial Pacific. This triggers a different set of global weather extremes.

Tropical Pacific corals record the hot-cold oscillations by absorbing less of an oxygen isotope (O18) during ENSO's hot phases, and progressively more of it during ENSO's cool phases. As corals grow, they create layers of oxygen isotope records, chronicles of temperature history.

Extracting them is adventurous: A research diver guides a chest-high pneumatic drill under the ocean. Its pressure hose connects to a motor on the boat that powers the drill after the diver has taken off her fins and weighed herself down on the reef.

She carefully angles the bit down the axis of coral growth to get a core with layers that can be accurately counted back in time. On occasion, waves put her and her safety diver through washing machine cycles.

"Doing this all underwater adds an extra level of difficulty, even from the simplest tasks like working with wrenches," Grothe said. "But the drill slices through underwater corals like butter. Fossil corals are drilled on land, and the drill constantly seizes up and overheats."

The physical proof taken from three islands that dot the heart of the ENSO zone has also thrown down scientific gauntlets, starkly challenging computer models of ENSO patterns and causes. A prime example: Previously unknown to science, the study showed that in a period from 3,000 to 5,000 years ago, the El Nino-La Nina oscillations were extremely mild.

"Maybe there's no good explanation for a cause. Maybe it just happened," Cobb said. "Maybe El Nino can just enter a mode and get stuck in it for a millennium."