The Simultaneous Merging Of Giant Galaxies

An international research team led by scientists from Göttingen and Potsdam proved for the first time that the galaxy NGC 6240 contains three supermassive black holes. The unique observations, published in the journal Astronomy & Astrophysics, show the black holes close to each other in the core of the galaxy. The study points to simultaneous merging processes during the formation of the largest galaxies in the universe.

Massive Galaxies like the Milky Way typically consist of hundreds of billions of stars and host a black hole with a mass of several million up to several 100 million solar masses at their centres. The galaxy known as NGC 6240 is known as an irregular galaxy due to its particular shape. Until now, astronomers have assumed that it was formed by the collision of two smaller galaxies and therefore contains two black holes in its core. These galactic ancestors moved towards each other at velocities of several 100 km/s and are still in the process of merging. The galaxy system which is around 300 million light years away from us - close by cosmic standards - has been studied in detail at all wavelengths, and has so far been regarded as a prototype for the interaction of galaxies.

The irregular galaxy NGC 6240. New observations show that it harbors not two but three supermassive black holes at its core. The northern black hole (N) is active and was known before. The zoomed-in new high-spatial resolution image shows that the southern component consists of two supermassive black holes (S1 and S2). The green color indicates the distribution of gas ionized by radiation surrounding the black holes. The red lines show the contours of the starlight from the galaxy and the length of the white bar corresponds to 1000 light years. 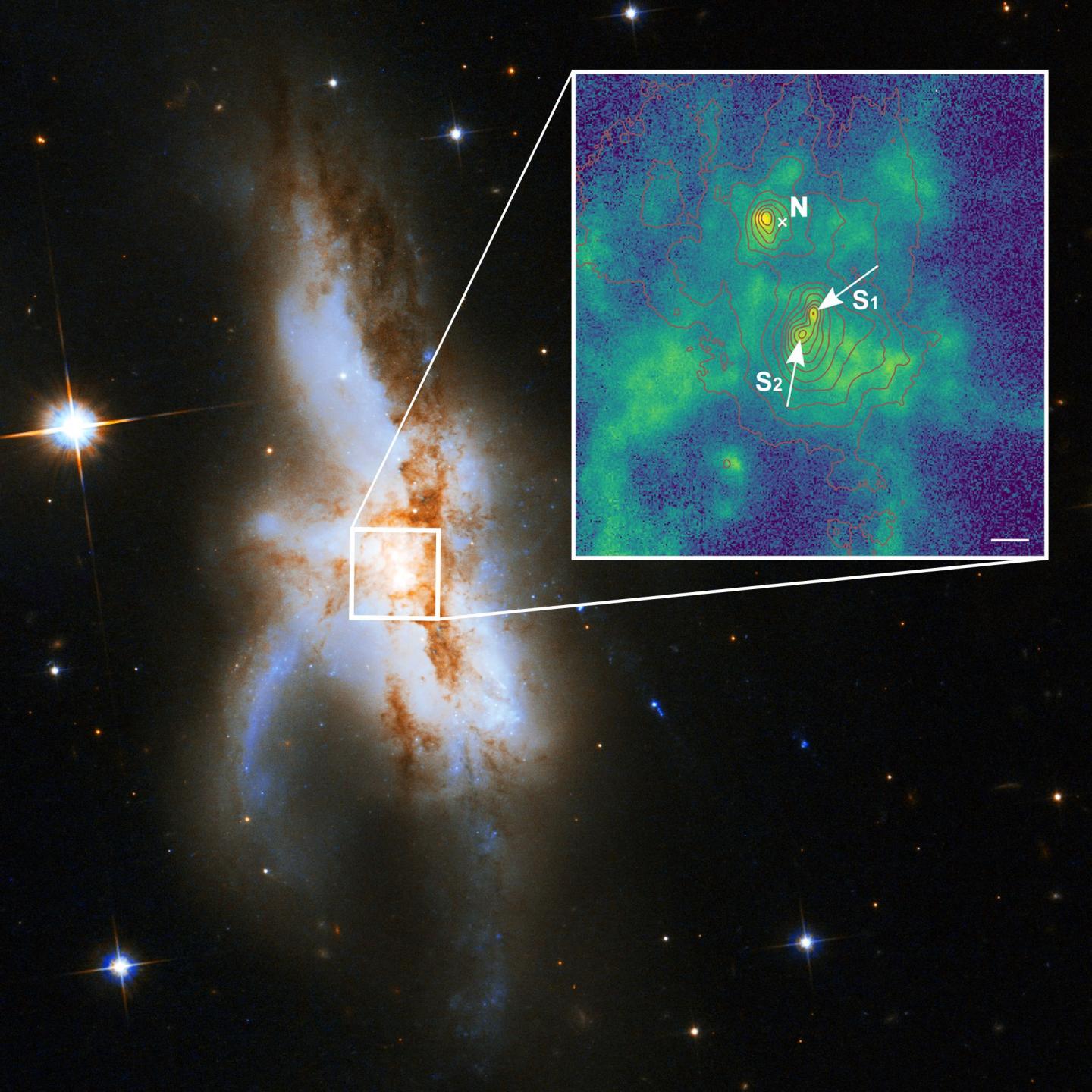 "Through our observations with extremely high spatial resolution we were able to show that the interacting galaxy system NGC 6240 hosts not two - as previously assumed - but three supermassive black holes in its center," reports Professor Wolfram Kollatschny from the University of Göttingen, the lead author of the study. Each of the three heavyweights has a mass of more than 90 million Suns. They are located in a region of space less than 3000 light-years across, i.e. in less than one hundredth of the total size of the galaxy. "Up until now, such a concentration of three supermassive black holes had never been discovered in the universe," adds Dr Peter Weilbacher of the Leibniz Institute for Astrophysics Potsdam (AIP). "The present case provides evidence of a simultaneous merging process of three galaxies along with their central black holes."

The discovery of this triple system is of fundamental importance for understanding the evolution of galaxies over time. Until now it has not been possible to explain how the largest and most massive galaxies, which we know from our cosmic environment in the "present time", were formed just by normal galaxy interaction and merging processes over the course of the previous 14 billion years approximately, ie the age of our universe. "If, however, simultaneous merging processes of several galaxies took place, then the largest galaxies with their central supermassive black holes were able to evolve much faster," Peter Weilbacher summarizes. "Our observations provide the first indication of this scenario."

For the unique high-precision observations of the galaxy NGC 6240 using the 8 metre VLT, a telescope operated by the European Southern Observatory in Chile, the 3D MUSE spectrograph was used in spatial high-resolution mode together with four artificially generated laser stars and an adaptive optics system. Thanks to the sophisticated technology, images are obtained with a sharpness similar to that of the Hubble Space Telescope but additionally contain a spectrum for each image pixel. These spectra were decisive in determining the motion and masses of the supermassive black holes in NGC 6240.

The scientists assume that the observed, imminent merging of the supermassive black holes in a few million years will also generate very strong gravitational waves. In the foreseeable future, signals of similar objects can be measured with the planned satellite-based gravitational wave detector LISA and further merging systems can be discovered.