Using Lasers to Study How Star Stuff Is Made

Stars in the universe are formed through a process called nucleosynthesis, which fuses lighter atoms to create new heavier atomic nuclei. Natural elements found here on Earth, such as helium and aluminum, were formed through this process inside of a star not unlike our own sun.

Shot-time image from a NIF experiment to study stellar nucleosynthesis. Solar 3He-3He reactions are happening in the bright center of the image, where the very hot and very dense star-like conditions are created by blasting a small plastic capsule filled with gas at 10 times the atmospheric pressure with 192 high-powered laser beams. Some of the focused laser beams can be seen coming in from the top and left sides of the image. 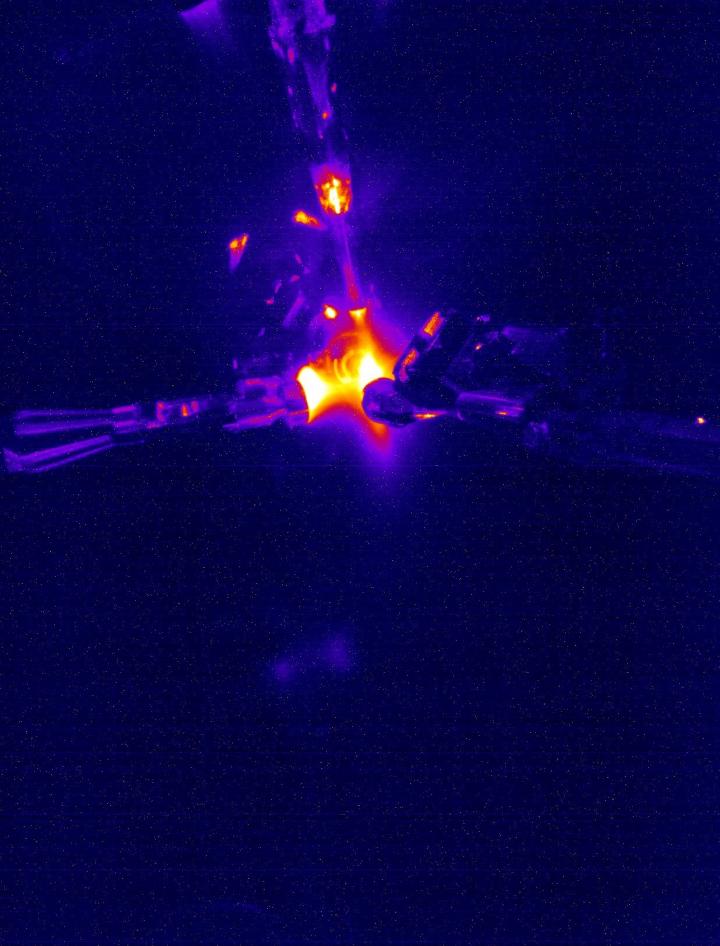 The NIF laser beams' energy is amplified in a building equivalent to the length of three football fields and then focused onto tiny gas- or ice-filled capsules with 18 micrometer thick walls (about the thickness of a human hair) and 3mm outer diameters. The capsule is accurately placed in the center of a target chamber that has a diameter of 10 meters. It's like trying to precisely place an ant in the exact center of a school bus. When the capsules are blasted with all 192 laser beams, they implode, creating very hot and very dense star-like conditions.

Ongoing experiments at the NIF are studying one of the primary nucleosynthesis processes in the sun, the 3He-3He reaction between two helium ions, in stellar-like conditions. This reaction, shown in Figure 1, is responsible for nearly half the energy generation in our sun as it burns hydrogen into helium.

"What is so cool about these experiments is that unlike in earlier studies on Earth, we are actually probing this reaction at temperature and density conditions comparable to those found in stars", says project lead scientist Dr. Maria Gatu Johnson of MIT.

At the American Physical Society Division of Plasma Physics meeting in Ft. Lauderdale, Florida this week, Dr. Gatu Johnson will report on how protons from the solar 3He-3He reaction have been observed in these experiments at a range of conditions.

These results will help scientists add important constraints on theoretical calculations of this complicated reaction and estimate the probability of the 3He-3He reaction happening, as well as other important processes in the sun. There will be one more round of experiments, currently planned for February 2020, where Dr. Gatu Johnson plans to better characterize the temperatures reached in the star-like conditions.

These experiments are part of a new effort to study nucleosynthesis reactions and relevant phenomena in stellar-like conditions using lasers.

"High-energy-density plasmas are the only laboratory on earth that recreate the extreme conditions in which the elements were produced in the universe," says co-Principal Investigator Dr. Alex Zylstra of Lawrence Livermore National Laboratory. The work will continue using this platform to probe other nucleosynthesis reactions and relevant phenomena in the future--this is a new, creative way of studying how star stuff is made!