The first study of a toad mimicking a venomous snake reveals that it likely imitates one of Africa’s largest vipers in both appearance and behaviour, according to results published in the Journal of Natural History.

A young adult Gaboon viper (Bitis gabonica), in Fungurume, southeastern Democratic Republic of Congo, which spends most of its time amongst the leaf litter of forest floors waiting to ambush prey. 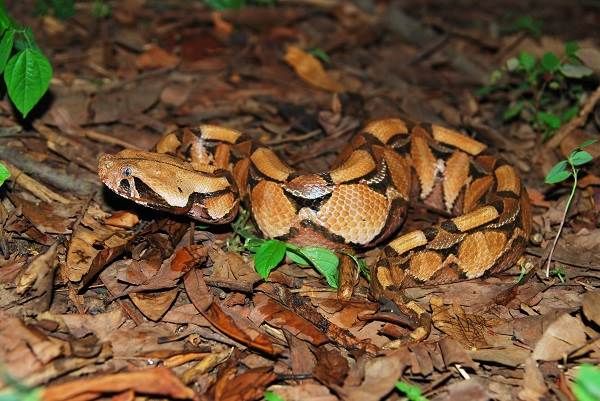 The Congolese giant toad, a triple cheeseburger-sized prize for any predator, may use its ability to mimic the highly venomous Gaboon viper to escape being eaten. The viper has the longest snake fangs in the world and produces more venom than any other snake.

“Our study is based on ten years of fieldwork and on direct observation by researchers lucky enough to see the toad’s behaviour first-hand. We’re convinced that this is an example of Batesian mimicry, where a harmless species avoids predators by pretending to be a dangerous or toxic one,” says Dr Eli Greenbaum from the University of Texas at El Paso. “To fully test our hypothesis, we’d have to demonstrate that predators are successfully duped, but this would be very difficult in the wild, where the toads are only encountered rarely. However, based on multiple sources of evidence provided in our study, we are confident that our mimicry hypothesis is well-supported.”

A side-by-side comparison between a subadult toad and subadult Gaboon viper from an aerial perspective, showing the similarities in appearance 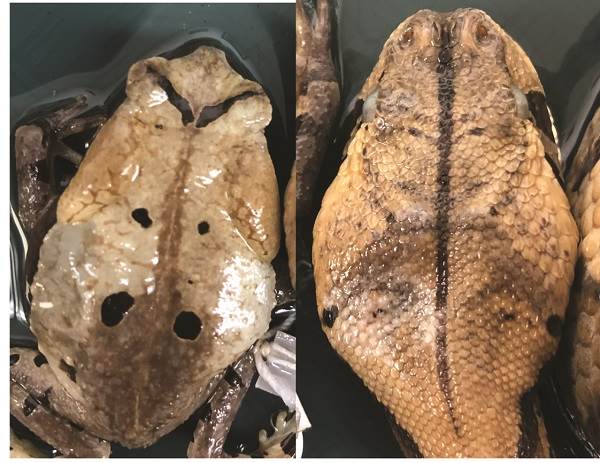 The researchers made comparisons between the appearance of the toad, found in central African rainforests, and the viper, which is more widespread in central, eastern and southern Africa. Using live wild-caught and captive specimens, as well as preserved museum ones, they found that the colour pattern and shape of the toad’s body is similar to that of the viper’s head. Most striking are two dark brown spots and a dark brown stripe that extends down the toad’s back, the triangular shape of the body, a sharp demarcation between the tan back and dark brown flanks, and the species’ extraordinarily smooth skin for a toad. Because the Gaboon viper is capable of causing deadly bites, would-be predators likely avoid the similar-looking toads to ensure they don’t make a lethal mistake.

Some mimics are exclusively visual, but for the Congolese giant toad, getting the look right is only part of the impersonation. If a Gaboon viper feels threatened, it will often incline its head and emit a long, loud warning hiss before it actually makes a strike. Similarly, Congolese herpetologist Chifundera Kusamba observed the toad emitting a hissing noise resembling the sound of air being slowly released from a balloon. Over a century ago, American biologist James Chapin observed a bow display by the toad, where the front limbs no longer prop up the viperine-shaped body, which looks similar to the cocked head of a snake threatening to strike.

The final part of the impersonation is getting the location right. Even the best impression will only work if predators of the harmless species are familiar with the venomous one. The researchers compared the geographical range of the toad and viper in the Democratic Republic of Congo (DRC) and found that the Congolese giant toad does not seem to occur in areas where the Gaboon viper is absent. The researchers identified 11 locations in the eastern rainforests where the range of both species overlaps.

An image of the toad species (Sclerophrys channingi) that is thought to mimic the viper, based on extensive observations. 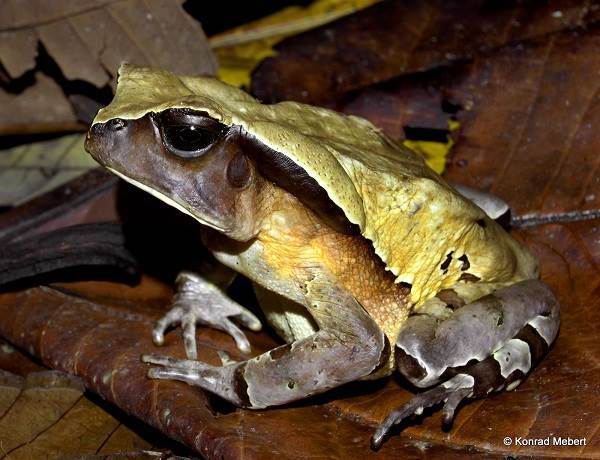 Based on speciation dating estimates from genetic data, the Congolese giant toad and Gaboon viper first evolved at about the same time in the early Pliocene about 4–5 million years ago. Considered with their similar appearance, behaviour, and overlapping geographic distribution, the toads and vipers likely coevolved together, further supporting the mimicry hypothesis.

“Given the relatively large size and therefore calorific value of this toad compared to other species, it would make tempting prey to a large variety of generalist predators, including primates and other mammals, lizards, snakes and birds,” says Kusamba, from the Centre de Recherche en Sciences Naturelles, DRC. “Many of these predators use vision to find their prey, and because the viper is deadly venomous, they probably recognise the distinctive, contrasting markings from a considerable distance and avoid the toad because of them, receiving a threatening hiss if the appearance doesn’t put them off.”

Perhaps the best-known examples of Batesian mimicry are in butterflies, where around a quarter of over 200 Papilio swallowtail butterfly species are non-toxic impersonators of toxic ones. Other examples from the animal kingdom include comet fish that fool predators into thinking their tail is a moray eel’s head, the Brazilian galliwasp lizard that mimics a toxic millipede, and zebra sharks that take on the coloration and undulating movements of venomous sea snakes. Many harmless snakes mimic venomous ones, and some caterpillars, legless lizards, and even birds are able to do so. However, the current study is the first to identify an amphibian mimicking a venomous snake.
https://doi.org/10.1080/00222933.2019.1669730

Contacts and sources:
Taylor and Francis