The Blistering Speed of the World's Fastest Ants

According to Noël Coward, mad dogs and Englishmen are the only creatures that go out in the midday sun, but Harald Wolf from the University of Ulm, Germany, would add another animal: Saharan silver ants (Cataglyphis bombycina).

Venturing from their nests to scavenge the corpses of less-fortunate creatures at the peak of the day - when the sand can reach 60°C - these resilient ants had always fascinated Wolf. 'Even among desert ants, the silver ants are special', he says, explaining that the insects were reputed to hit speeds approaching 1 m s/1. But little was known about how the ants scamper at such blistering speeds across the sand.


These are Saharan silver ant (Cataglyphis bombycina) workers in the desert at Douz, Tunisia. 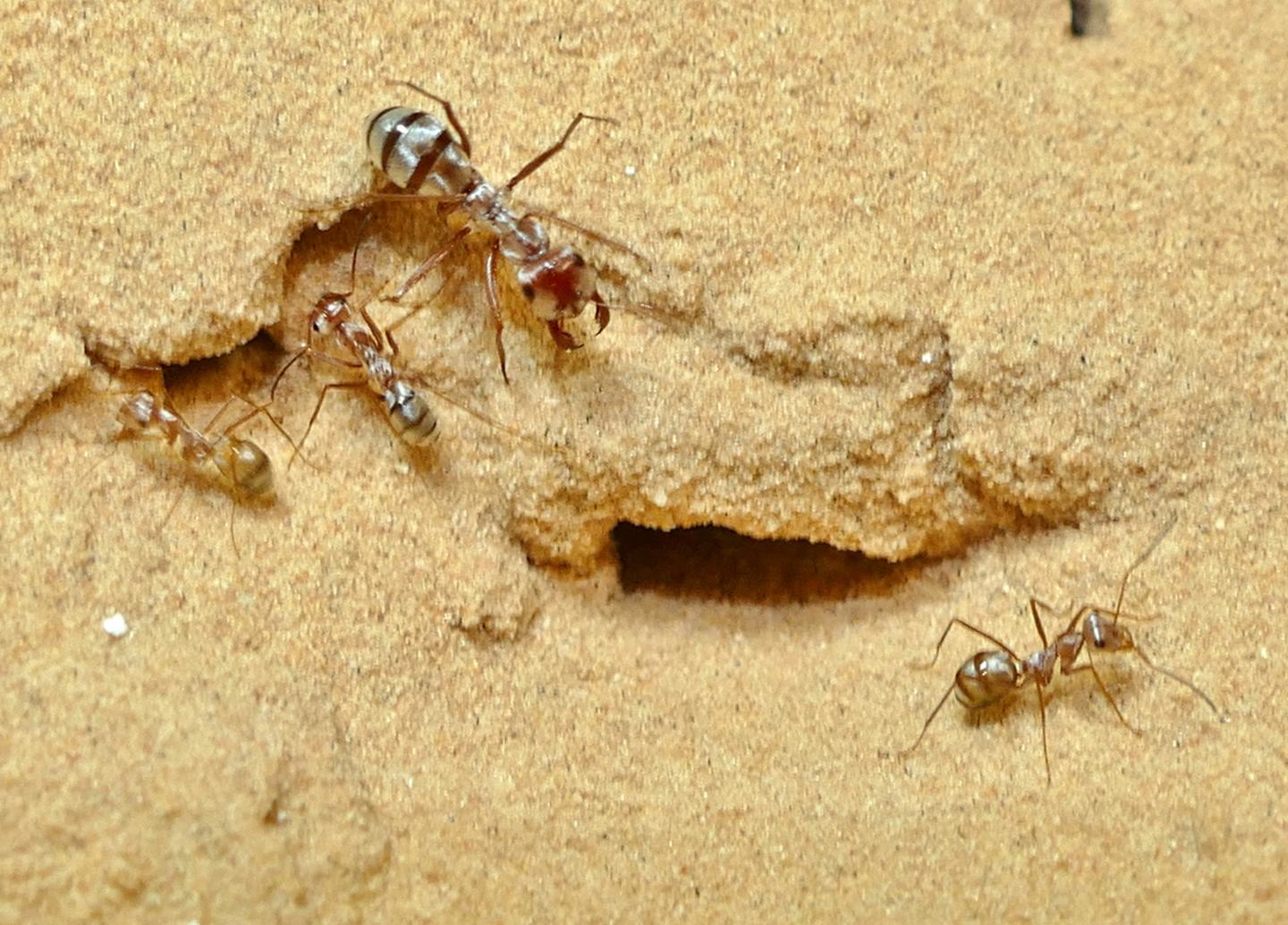 During an earlier trip to the salt pans of Tunisia - to study the silver ant's cousin, Cataglyphis fortis - Wolf, Sarah Pfeffer, Verena Wahl and Matthias Wittlinger had taken a detour to Douz to search for the enigmatic desert dwellers. After finding silver ants thriving in the dunes, the team returned in 2015 to film them in action. The team publishes their discover that Saharan silver ants are the fastest ants ever recorded, reaching speeds of 0.855m/s (855mm/s) by swinging their legs at speeds of up to 1300mm/s in Journal of Experimental Biology at http://jeb.biolgists.org.

Pfeffer recalls that locating the inconspicuous nests was far from easy: 'We had to look for digging ants or follow a foraging ant back home', she explains. However, once the team had located a nest, it was simply a matter of connecting an aluminium channel to the entrance and placing a feeder at the end to lure the ants out. 'After the ants have found the food - they love mealworms - they shuttle back and forth in the channel and we mounted our camera to film them from the top', smiles Pfeffer. In addition, the team excavated a nest, returning with it to Germany, to record the insects running more slowly at cooler temperatures.

Calculating the insects' top speeds, Pfeffer and Wahl were impressed to find the animals hit an extraordinary 0.855m/s (that is, 855mm/s or 108 times their own body length per second) during the hottest part of the desert day, falling to 0.057m/s at 10°C in the lab. In contrast, larger Cataglyphis fortis only get up to 0.62m/s (only 50body lengths/s), making C. bombycina the world's fastest ant and placing them close to the top of the list of world record-breaking creatures, alongside Australian tiger beetles (171body lengths/s) and California coastal mites (377body lengths/s).

The scientists also compared the leg lengths of the two species and it was evident that the swift silver ants are doing something remarkable. Their limbs are almost 20% shorter than those of their leggier cousins. Wondering how the smaller ants outstrip their larger Cataglyphis relatives, the team focused on the ants' footwork.

Analysing the silver ant's manoeuvres, the team realised that the insects were swinging their 4.3-6.8mm long legs at speeds of up to 1300mm/s, taking up to 47strides/s - around a third faster than their larger relatives. And when they scrutinised the ants' stride lengths, they quadrupled from 4.7mm to 20.8mm as the ants shifted up through the gears. The team also discovered that instead of simply running, the ants switched to a gallop, with all six feet off the ground simultaneously at speeds above 0.3m/s.

In addition, they analysed the ants' coordination and were impressed by how well the ants synchronised their feet - tightly coordinating the movements of the three legs that work together forming tripods as they walk - while each foot only contacted the ground for as little as 7 milliseconds before initiating the next stride.

'These features may be related to the sand dune habitat', says Wolf, adding, '[they] could prevent the animal's feet from sinking too deeply into the soft sand'. He is also keen to find out more about how these desert dwellers pull off their high-speed feats, which he suspects must require muscle contraction speeds close to physiological limits.