Out at the boundary of our solar system, pressure runs high. This pressure, the force plasma, magnetic fields and particles like ions, cosmic rays and electrons exert on one another when they flow and collide, was recently measured by scientists in totality for the first time — and it was found to be greater than expected.

An illustration depicting the layers of the heliosphere. 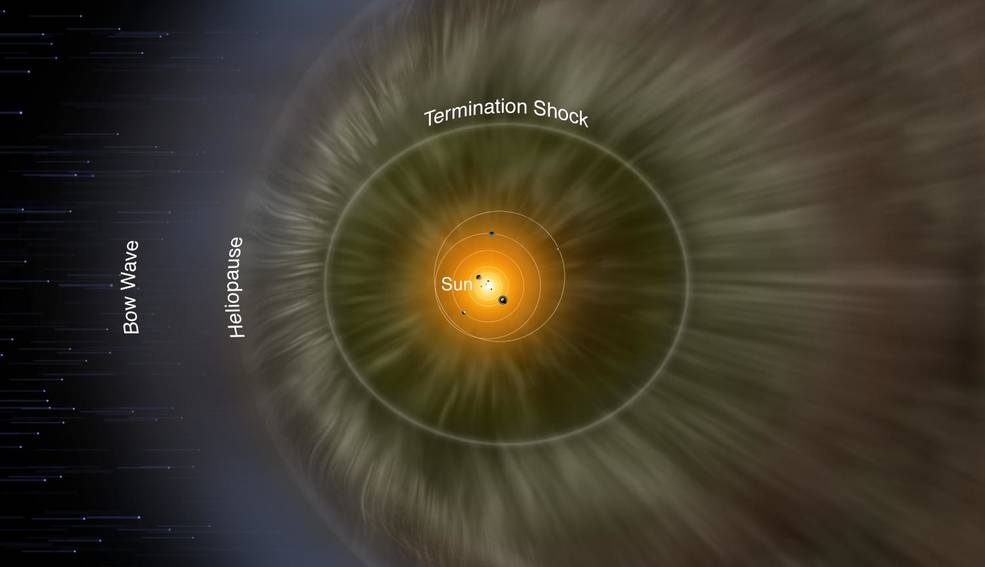 
Using observations of galactic cosmic rays — a type of highly energetic particle — from NASA’s Voyager spacecraft scientists calculated the total pressure from particles in the outer region of the solar system, known as the heliosheath. At nearly 9 billion miles away, this region is hard to study. But the unique positioning of the Voyager spacecraft and the opportune timing of a solar event made measurements of the heliosheath possible. And the results are helping scientists understand how the Sun interacts with its surroundings.

“In adding up the pieces known from previous studies, we found our new value is still larger than what’s been measured so far,” said Jamie Rankin, lead author on the new study and astronomer at Princeton University in New Jersey. “It says that there are some other parts to the pressure that aren’t being considered right now that could contribute.”

On Earth we have air pressure, created by air molecules drawn down by gravity. In space there’s also a pressure created by particles like ions and electrons. These particles, heated and accelerated by the Sun create a giant balloon known as the heliosphere extending millions of miles out past Pluto. The edge of this region, where the Sun’s influence is overcome by the pressures of particles from other stars and interstellar space, is where the Sun’s magnetic influence ends. (Its gravitational influence extends much farther, so the solar system itself extends farther, as well.)

In order to measure the pressure in the heliosheath, the scientists used the Voyager spacecraft, which have been travelling steadily out of the solar system since 1977. At the time of the observations, Voyager 1 was already outside of the heliosphere in interstellar space, while Voyager 2 still remained in the heliosheath.

“There was really unique timing for this event because we saw it right after Voyager 1 crossed into the local interstellar space,” Rankin said. “And while this is the first event that Voyager saw, there are more in the data that we can continue to look at to see how things in the heliosheath and interstellar space are changing over time.” 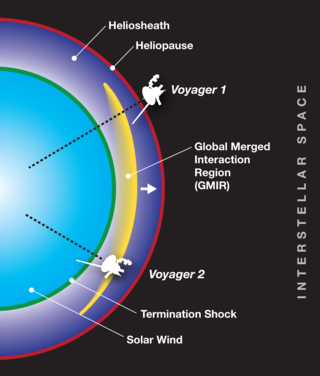 The scientists used an event known as a global merged interaction region, which is caused by activity on the Sun. The Sun periodically flares up and releases enormous bursts of particles, like in coronal mass ejections. As a series of these events travel out into space, they can merge into a giant front, creating a wave of plasma pushed by magnetic fields.

When one such wave reached the heliosheath in 2012, it was spotted by Voyager 2. The wave caused the number of galactic cosmic rays to temporarily decrease. Four months later, the scientists saw a similar decrease in observations from Voyager 1, just across the solar system’s boundary in interstellar space.

Knowing the distance between the spacecraft allowed them to calculate the pressure in the heliosheath as well as the speed of sound. In the heliosheath sound travels at around 300 kilometers per second — a thousand times faster than it moves through air.

The scientists noted that the change in galactic cosmic rays wasn’t exactly identical at both spacecraft. At Voyager 2 inside the heliosheath, the number of cosmic rays decreased in all directions around the spacecraft. But at Voyager 1, outside the solar system, only the galactic cosmic rays that were traveling perpendicular to the magnetic field in the region decreased. This asymmetry suggests that something happens as the wave transmits across the solar system’s boundary.

“Trying to understand why the change in the cosmic rays is different inside and outside of the heliosheath remains an open question,” Rankin said.

Studying the pressure and sound speeds in this region at the boundary of the solar system can help scientists understand how the Sun influences interstellar space. This not only informs us about our own solar system, but also about the dynamics around other stars and planetary systems.