When it comes to being willing to explore more efficient options to solving a problem, monkeys exhibit more cognitive flexibility than humans, according to a study by Georgia State University psychology researchers.

“We are a unique species and have various ways in which we are exceptionally different from every other creature on the planet,” said Julia Watzek, a graduate student in psychology at Georgia State. “But we’re also sometimes really dumb.” 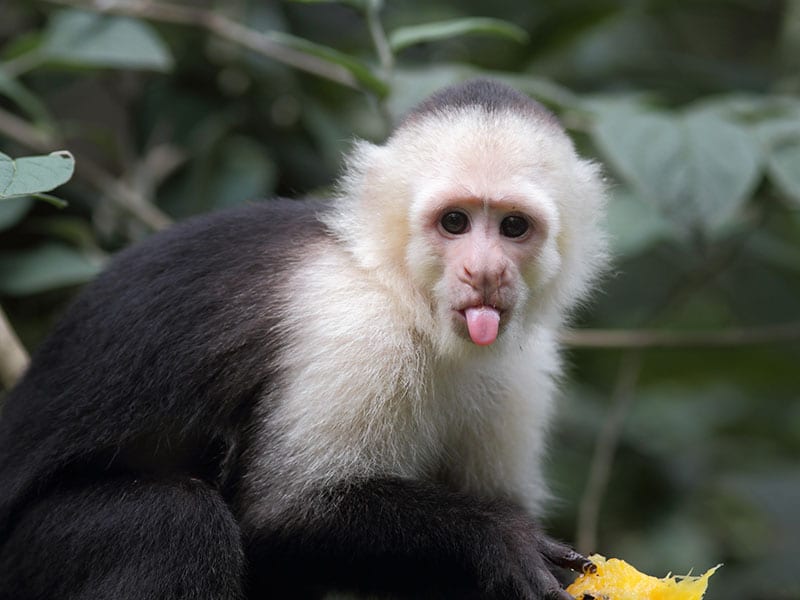 Watzek was the lead author of a paper published in Nature Scientific Reports illustrating how capuchin and rhesus macaque monkeys were significantly less susceptible than humans to “cognitive set” bias when presented a chance to switch to a more efficient option. The research results supported earlier studies with fellow primates, baboons and chimpanzees, who also showed a greater willingness to use optional shortcuts to earn a treat compared to humans who persisted in using a familiar learned strategy despite its relative inefficiency.

The test involved establishing a specific strategy to lead to a solution. Through trial and error using a computer, monkeys and humans had to follow a pattern by pushing a striped square then a dotted square and then, when it appeared, a triangle to achieve the goal and receive a reward. For the humans, the reward was either a jingle or points to let them know they got it right. For the monkeys, it was a banana pellet. Wrong results got a brief timeout and no reward.

After the strategy was learned, subsequent trials presented the triangle option immediately without having to push the patterned squares in sequence. All of the monkeys quickly used the shortcut, while 61 percent of the humans did not. In fact, 70 percent of all the monkeys used the shortcut the very first time it was available compared to only one human. (The study involved 56 humans, 22 capuchin and 7 rhesus monkeys.)

“There’s a heavy reliance on rote learning and doing it the way you were taught and to specifically not take the shortcut,” Watzek said of the human subjects.

“More of the humans do take the shortcut after seeing a video of somebody taking the shortcut, but about 30 percent still don’t,” Watzek said.” In another version we told them they shouldn’t be afraid to try something new. More of them did use the shortcut then, but many of them still didn’t.”

The study illustrates how humans can suffer from learned biases that can lead us to make inefficient decisions and miss opportunities. Often, sticking with what’s familiar and proven – like a commuting route to work – isn’t a big deal with a low cost over an alternative. Other times, using inefficient, biased or outdated practices could have far-reaching consequences. An example would be the most recent global financial crisis when many experts ignored instability warnings and continued practicing risky trading and lending habits that led to a housing market crash.

“To set ourselves up for good decision-making, sometimes that means changing available options,” Watzek said. “I’m not proposing to topple the entire Western education system, but it is interesting to think through ways in which we train our children to think a specific way and stay in the box and not outside of it. Just be mindful of it. There are good reasons for why we do what we do, but I think sometimes it can get us into a lot of trouble.”

Study co-author Sarah Pope, a former graduate student in the Neuroscience Institute at Georgia State, took the experiment to Namibia and tested it on members of the semi-nomadic Himba tribe, which is not exposed to Western education and lives in a less predictable environment. While more were quicker to use the shortcut immediately, more than half still used the three-step approach as well. In tests of visitors at Zoo Atlanta, children 7-10 were four times more likely than adults to use the shortcut but still more than half continued to use the learned strategy.

“This was a great example of how a really elegant, simple study can be hugely impactful in various contexts,” said Sarah Brosnan, a Georgia State psychology professor who oversaw the study and was a co-author of the paper. “It’s adding to the larger body of literature on why humans can be so different from other primates.”

For the full text of the journal article, “Capuchin and rhesus monkeys but not humans show cognitive flexibility in an optional-switch task,” go to: https://www.nature.com/articles/s41598-019-49658-0