Finally, the Answer to a 'Burning' 40-Year-Old Question

We've known for decades that catalysts speed up the reaction that reduces harmful industrial emissions. And now, we know exactly how they do it.

A recent paper by Israel Wachs, the G. Whitney Snyder Professor of Chemical and Biomolecular Engineering at Lehigh University's P.C. Rossin College of Engineering and Applied Science, describes the mechanism, and was the inside back cover story of the September 2, 2019, issue of Angewandte Chemie, a journal of the German Chemical Society. 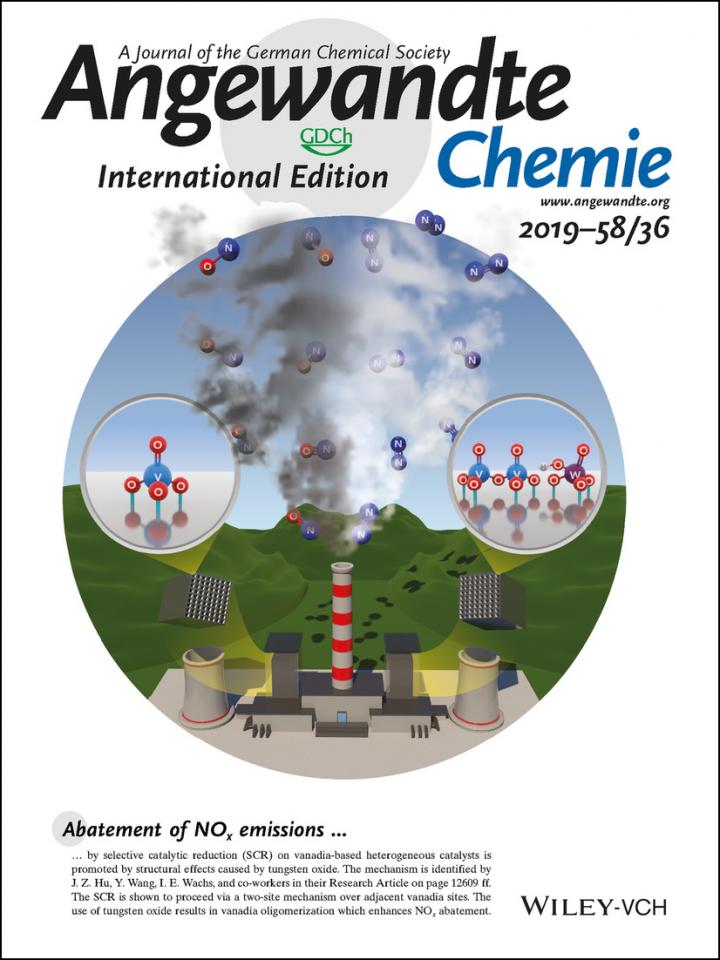 Power plants are a major source of toxic emissions associated with climate change. When fossil fuels like coal and natural gas are burned, they produce dangerous contaminants, in particular, a group of harmful gases called nitrogen oxides (or NOx) that contribute to acid rain, ground-level ozone formation, and greenhouse gases.

"The combustion process to generate energy requires very high temperatures that cause molecular nitrogen (N2) and oxygen (O2) present in air to disassociate or crack," says Wachs. "The N and O atoms then recombine and make NOx, which is considered the biggest pollution problem today because it's very hard to control."

Back in the 1970s, the Japanese developed a technology to control NOx emissions by reacting NOx with ammonia to form harmless nitrogen (N2) and water (H2O).

NOx emissions are now strongly regulated and one common abatement strategy is the selective catalytic reduction (SCR) of nitrogen oxides by ammonia. Catalysts both speed up the SCR reaction and control the reaction products (such as forming N2 and H2O), meaning the catalyst ensures the reaction produces no undesirable harmful gases (hence "selective").

"The catalyst consists of vanadium oxide and tungsten oxide dispersed on the surface of a titania (TiO2) support. The vanadium oxide is the active component performing the selective catalytic reduction towards N2 formation and not the undesirable reaction products that can be toxic," says Wachs. "There's been a big debate raging in the literature for 40 years, right from the beginning of the development of this technology, around the question of what exactly does the tungsten oxide component do?"

The research community knew from experience that tungsten oxide thermally stabilizes the titania support, which is vital as these catalysts can spend years at high temperatures during operation. They also knew that adding tungsten oxide makes the vanadium oxide much more active, which is also important as the more active a catalyst is the less of it you need. But why did tungsten oxide have such an effect on the reactivity of vanadium oxide?

"There are only a few of these HF NMR spectrometers in the world, and their magnetic fields are so sensitive that it gives all the subtle molecular details of what was going on in the material," he says.

Those molecular details appear as signals that Wachs and his team then interpreted using theoretical calculations (Density Functional Theory).

This fundamental understanding of how the catalyst works will help guide future designs of improved SCR catalysts, says Wachs, who was recently elected as a Fellow of the National Academy of Inventors and has been recognized internationally for his innovative contributions to fundamental catalysis that have been applied in the manufacture of chemicals and control of air pollution.

"Now that we know what's going on, it won't be trial and error in terms of making it better since we take a scientific approach to the catalyst design."

And that will have huge ramifications for industry and air pollution control, he says.

"A more active catalyst has significant benefits. First of all, these systems are huge, almost the size of a small house, and a lot of these plants were built before this technology was mandated, so space at the plants is limited. So if you have a more active catalyst, you need a smaller footprint. They're also expensive, so if the catalyst is more active, you don't need as much. And finally, since we also think they'll last longer, it will limit the amount of time a plant has to shut down to install a new catalyst."

But for Wachs, the effect on public health is the most meaningful--and gratifying--result.

"Easily, 40,000 to 50,000 people in the United States die annually due to complications from poor air quality. So catalysis, and the research around it, has tremendous societal impact. It's very satisfying when you're able to solve a problem that's been around for 40 years, that will improve the technology, and address these health issues."