A group of snorkeling grandmothers is helping scientists better understand marine ecology by photographing venomous sea snakes in waters off the city of Noumea, New Caledonia.

Two years ago the seven women, all in their 60s and 70s, who call themselves "the fantastic grandmothers", offered to help scientists Dr Claire Goiran from the University of New Caledonia and Professor Rick Shine from Australia's Macquarie University in their quest to document the sea snake population in a popular swimming spot known as Baie des citrons.

A group of snorkeling grandmothers is helping scientists better understand marine ecology by photographing venomous sea snakes in waters off the city of Noumea, New Caledonia. 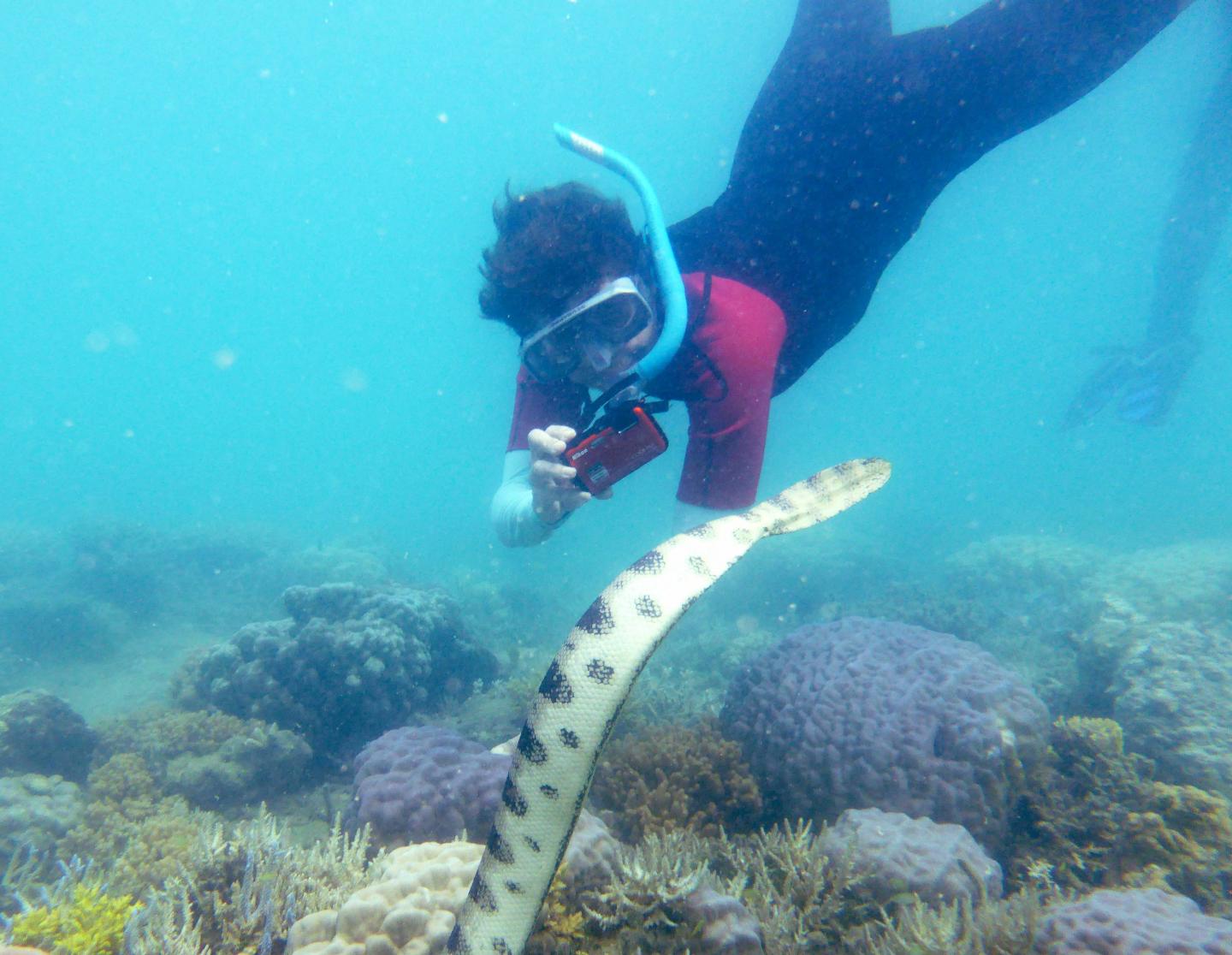 For 15 years Dr Goiran and Professor Shine had been documenting the presence of a small harmless species, known as the turtle?headed sea snake (Emydocephalus annulatus). In the first eight years of the project they also glimpsed - just six times - another species, the 1.5 metre-long, venomous greater sea snake (Hydrophis major).

From 2013 the pair decided to look more closely for this much larger and much more robust snake, but over the ensuing 36 months saw just 10 every year.

Enter the Fantastic Grandmothers, who were fond of snorkelling recreationally in the Baie des citrons and proposed a citizen science project. Armed with cameras, for the past couple of years the women have been venturing underwater and getting up close and personal with the potentially lethal reptiles.

A group of snorkelling grandmothers is helping scientists better understand marine ecology by photographing venomous sea snakes in waters off the city of Noumea, New Caledonia. 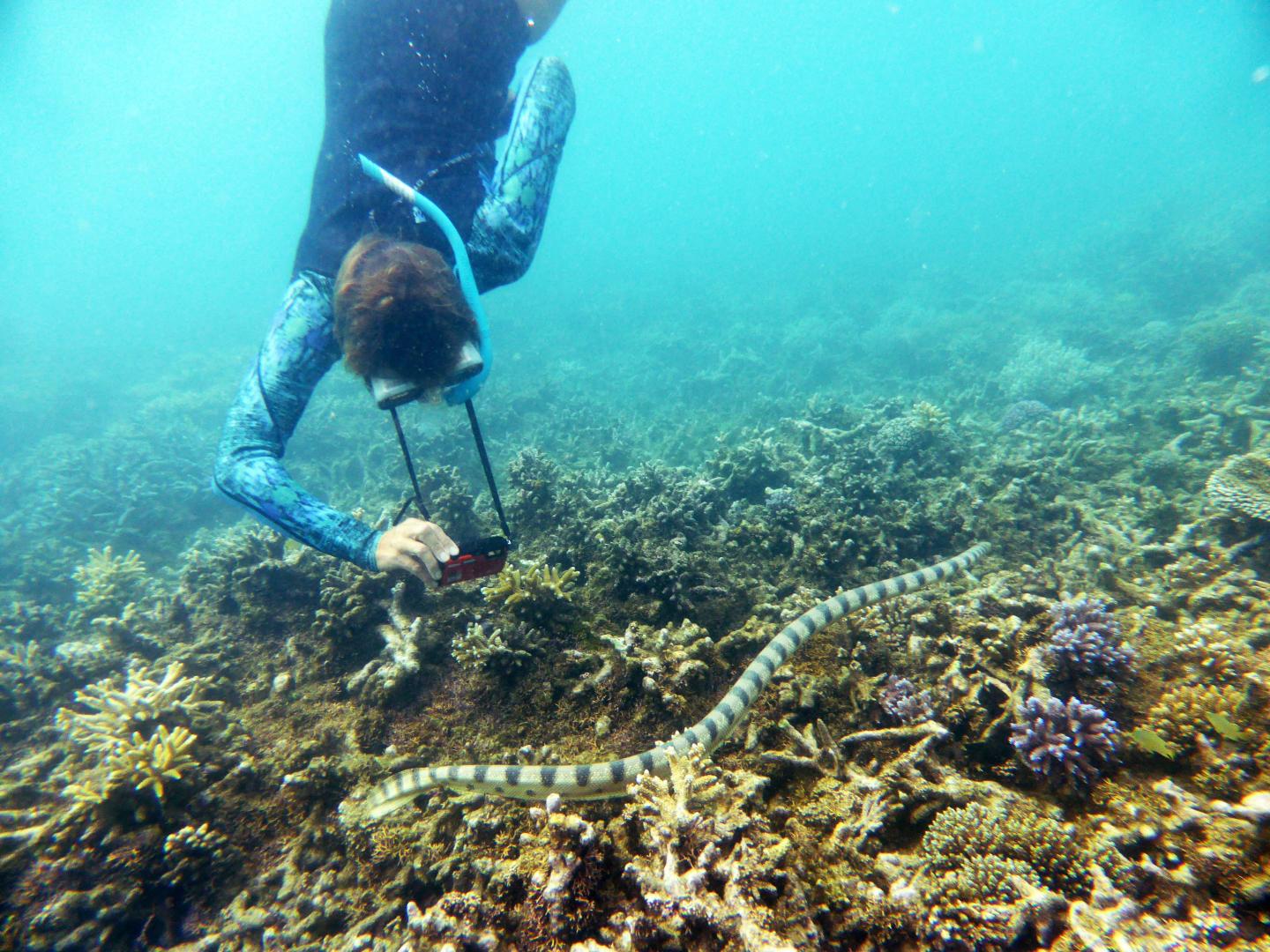 "The results have been astonishing," says Dr Goiran.

"As soon as the grandmothers set to work, we realized that we had massively underestimated the abundance of greater sea snakes in the bay."

Greater sea snakes have distinctive markings, allowing individuals to be easily identified from photographs. In a paper just published in the journal Ecosphere the scientists reveal that thanks to the diving grannies they now know that there are more than 249 of the snakes in the single bay.

The photography project has also revealed crucial new information about the snakes' breeding patterns, and numbers of young - more information, says Dr Goiran, than for any other related species, worldwide.

"Remarkably," says Professor Shine, "they found a large number of lethally toxic sea snakes in a small bay that is occupied every day by hordes of local residents and cruise?ship passengers - yet no bites by the species have ever been recorded at Baie des citrons, testifying to their benevolent disposition."

Dr Goiran is full of praise for the elderly women who happily volunteered to take part in what became a very notable citizen science project.

"I have been studying sea snakes in the Baie des Citrons for 20 years, and thought I understood them very well - but the Fantastic Grandmothers have shown me just how wrong I was," she says.

"The incredible energy of the Grandmothers, and their intimate familiarity with 'my' study area, have transformed our understanding of the abundance and ecology of marine snakes in this system. It's a great pleasure and privilege to work with them."