Early Humans Evolved in Ecosystems Unlike Any Found Today

To understand the environmental pressures that shaped human evolution, scientists must first piece together the details of the ancient plant and animal communities that our fossil ancestors lived in over the past 7 million years. Because putting together the puzzle of millions-of-years-old ecosystems is a difficult task, many studies have reconstructed the environments by drawing analogies with present-day African ecosystems, such as the Serengeti. A study led by a University of Utah scientist calls into question such approaches and suggests that the vast majority of human evolution occurred in ecosystems unlike any found today. The paper was published online today in the Proceedings of the National Academy of Sciences of the United States of America.

This is the geographic distribution of the modern (left) and fossil (right) larger herbivore communities analyzed in the paper. 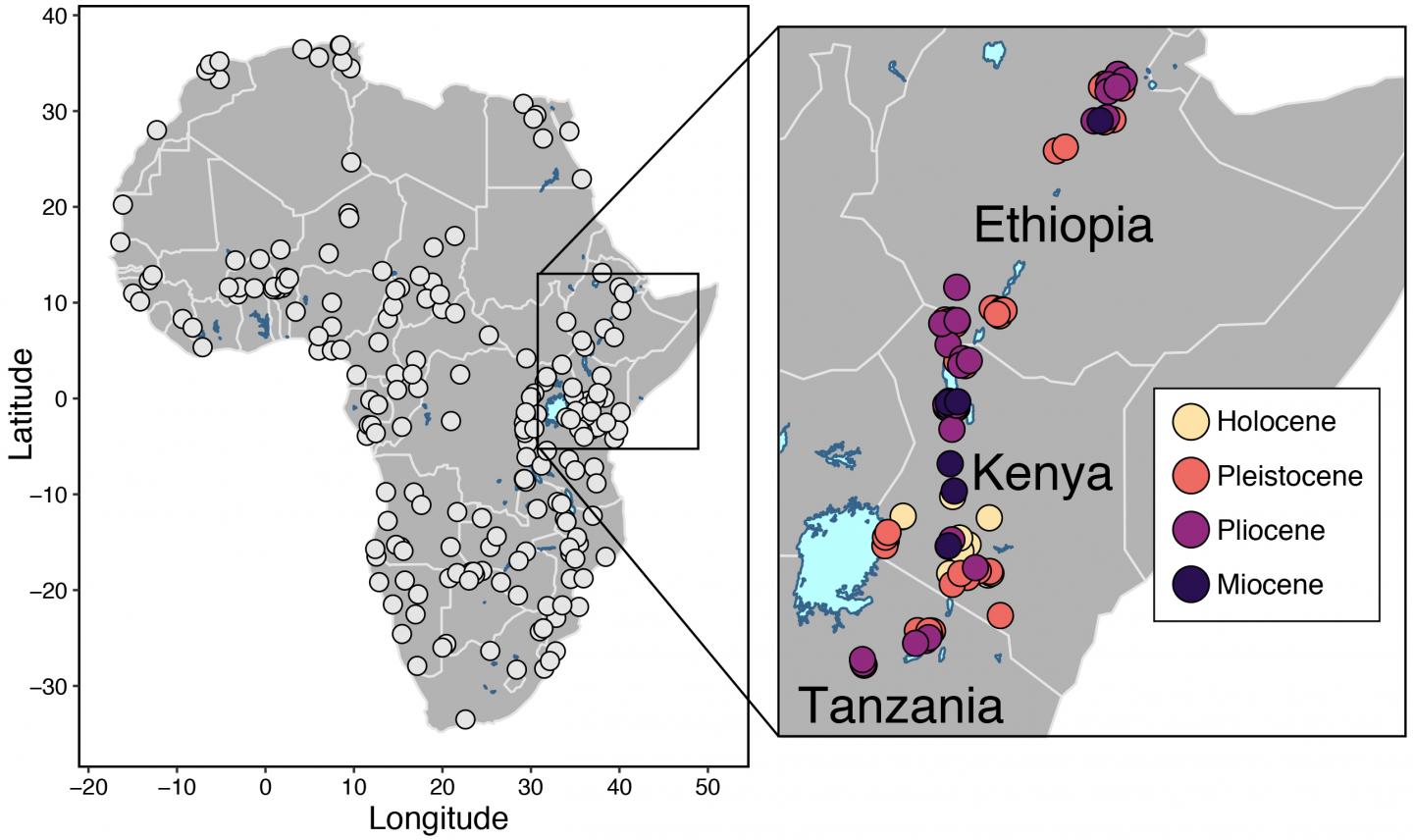 To test for differences between modern and ancient environments, the researchers analyzed a dataset of more than 200 present-day African mammal communities and more than 100 fossil communities spanning the past 7 million years in eastern Africa, a time period encompassing all of human evolution. They found that prior to 700,000 years ago, mammal communities looked far different from those today. For example, fossil communities supported a greater diversity of megaherbivores, species over 2,000 pounds, such as elephants. Likewise, the dietary structure of fossil communities frequently departed from those seen today, with patterns of grass- and leaf-eating species fluctuating in abundance. Around 1 million years ago, fossil communities began transitioning to a more modern makeup, which the authors suggest is the likely the outcome of long-term grassland expansion coupled with arid climate pulses. The new paper adds to growing evidence that scientists need to critically re-evaluate our understanding of the ancient ecosystems in which early humans evolved.

"For a long time, our field has been trying to pin down how environmental changes influenced human evolution, but we've got to be able to reconstruct past environments right in the first place," said lead author Tyler Faith, curator of archaeology at the Natural History Museum of Utah and assistant professor of anthropology at the U. "If we continue to reconstruct ancient environments on the basis of modern African ecosystems, we are likely missing an entire realm of possibilities in how past ecosystems functioned. Our study invites our fellow researchers to think more critically about that."

Eastern Africa is a boon for mammal fossils, making it an ideal region to piece together ancient ecosystems over the past 7 million years. With their extensive database of both ancient and modern mammal communities, the researchers focused on three traits: diet, body size, and digestive strategy. For all of these traits, they found that the makeup of ancient herbivore communities differed significantly from those of today. This is key, as herbivores directly shape the structure of ecosystems in ways that impact a wide variety of animal and plant species.

"Large herbivores aren't just passive parts of an ecosystem, we know that they can shape the landscape. They're eating the plants, and the biggest ones are knocking down trees or trampling soils, which collectively influences vegetation structure, fire regimes, nutrient cycling, and impacts other organisms, including humans," said Faith.

This is a comparative analysis of fossil (gray shaded) and modern (light gray shaded) mammal communities. The study found little overlap between the types of mammals that thrived in the past versus in modern East African ecosystems. 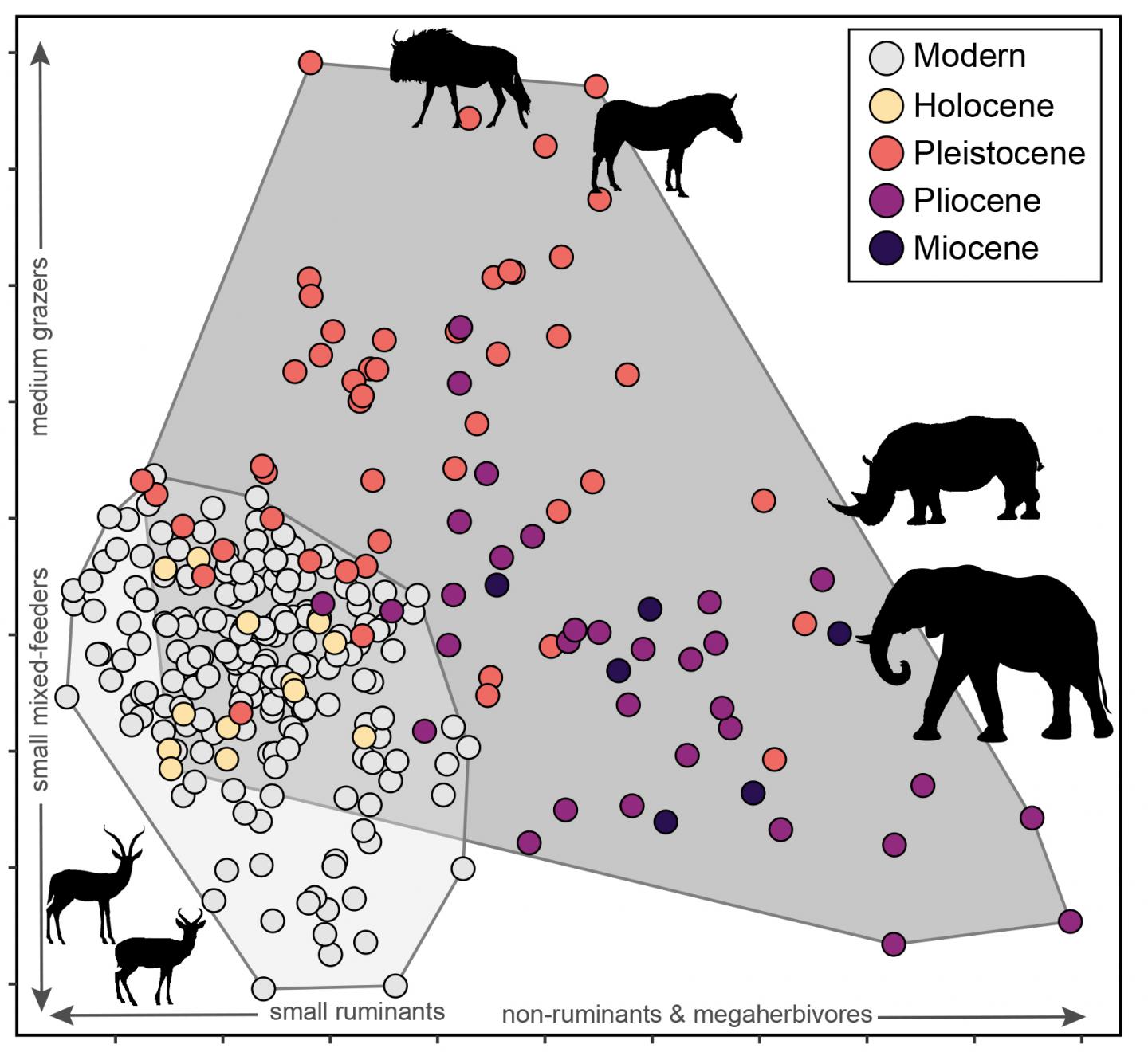 For example, modern African ecosystems are dominated by ruminants--relatives of cows and antelopes thCredit:at have four compartments in their stomachs to thoroughly break down food. Non-ruminants equipped with simple stomachs are comparatively rare, with at most eight species coexisting in the same area today. Non-ruminants, including relatives of elephants, zebras, hippos, rhinos and pigs, are like digestive conveyor belts, said Faith. They eat larger quantities of plants to make up for their inefficient digestion. In contrast to the present-day pattern, eastern African fossil records document landscapes rich in non-ruminant communities, with dozens of species co-existing within the same area.

Fossil and modern communities were also vastly different in terms of body sizes. The fossil records document lots more megaherbivores than their modern counterparts. A steady decline of megaherbivores began 4.5 million years ago until they represented a more modern distribution 700,000 years ago.

What is the impact of these eating machines all living together in the same places, when it's not the case today?

"These ancient herbivore communities were probably consuming far more vegetation, which means less fuel for wildfires. Because fire is an important part of modern ecosystems in Africa and favors grasslands over woodlands, it's going to fundamentally alter how things are working at the level of entire ecosystems, starting with the plant communities," adds John Rowan, co-author and postdoctoral researcher at the University of Massachusetts Amherst. "Paleontologists have been aware of that, but until now, no one's really tried to measure just how different the past was compared to the present."

Artist Heinrich Harder's illustration of the extinct Deinotherium, an ancient relative to modern-day elephants that appeared in the Middle Miocene 20 million years ago and lived until the Early Pleistocene, around 2 million years ago. Harder completed the illustration in the early 1900s using fossils as his model. 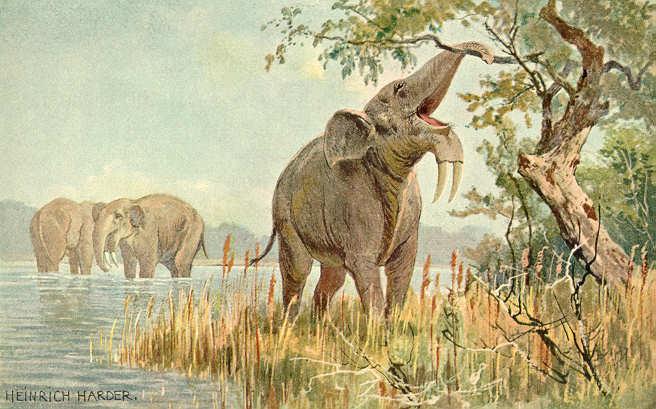 What drove shifts in mammal communities over the past 7 million years? One of the most well-documented changes is the expansion of grasslands throughout the past 4 million years. Many of the fossil megaherbivores preferred wooded environments, whereas ruminants thrive in the wide-open savannas that dominate parts of eastern Africa today. The fossil record of herbivores closely follows the shifting environments, with changes in the representation of these groups tracking long-term grassland expansion.

Around 1 million years ago, fossils show a shift in mammal community dietary structure that grassland expansion alone fails to explain. The non-ruminants that had dominated eastern African ecosystems fell into a sharp decline. This corresponds to marine dust records suggesting the region experienced pulses of climate drying that would have hit non-ruminants especially hard because they depend on reliable access to surface water, meaning that many species may have disappeared alongside the rivers and lakes they depended on. Additionally, the conveyor belt eating strategy of non-ruminants relies on accessing abundant vegetation, which would have declined during periods of drought.

The authors do not fault previous researchers for relying so heavily on analogies with present-day African ecosystems, emphasizing that a study of this scope has only recently become possible.

"Paleontology has hit a big data era," said Faith. Co-author and Colorado State University assistant professor Andrew Du added, "With the assembly of large, comprehensive datasets, we can now ask important questions that are fundamentally different from those asked in the past. We can investigate larger-scale patterns and dynamics that undoubtedly influenced the course of human evolution."