Diminutive animals known as tardigrades appear to us as plump, squeezable toys, earning them irresistible nicknames such as "water bears" and "moss piglets."

But don't let their squishy appearance fool you. These microscopic invertebrates are highly resilient. In fact, they're considered "extremophiles," with near super-power abilities of defense in harsh conditions. What's behind these capabilities?

UC San Diego biologists found that tardigrades, or 'water bears,' are able to withstand extreme conditions because of a Damage suppression protein (Dsup) that binds and forms a protective cloud against survival threats. 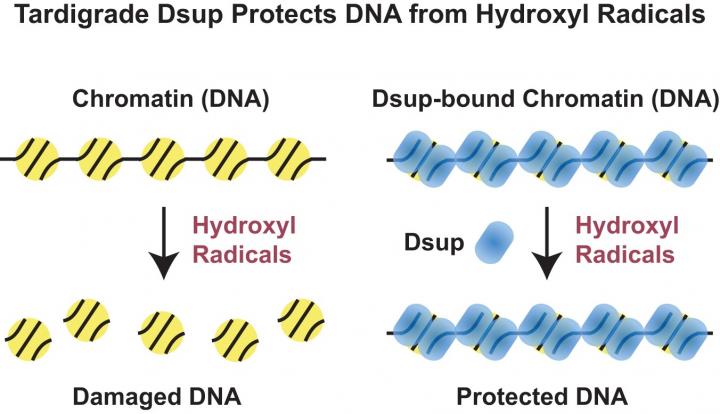 Scientists at the University of California San Diego have gained a new understanding of how tardigrades are protected in extreme conditions. Their findings are published in the journal eLife on Oct. 1, 2019.

At roughly 0.1 to one millimeter in size, tardigrades are found in water environments around the world--including mountainous, deep sea and Antarctic environments. They are well documented as having remarkable abilities to survive extreme conditions, from dangerously high radiation levels to chillingly low temperatures to exposure to deadly chemicals. They've even been launched into space as part of a project to transfer life forms to the moon (and crash-landed there with the Beresheet lander spacecraft earlier this year).

Previous studies identified a protein named Dsup (for Damage suppression protein), which is found only in tardigrades. Intriguingly, when Dsup is tested in human cells, it can protect them from X-rays; however, it was not known how Dsup performs this impressive feat. Through biochemical analysis, the UC San Diego team discovered that Dsup binds to chromatin, which is the form of DNA inside cells. Once bound to chromatin, Dsup protects cells by forming a protective cloud that shields DNA from hydroxyl radicals, which are produced by X-rays.

"We now have a molecular explanation for how Dsup protects cells from X-ray irradiation," said Kadonaga, a distinguished professor and the Amylin Endowed Chair in Lifesciences Education and Research. "We see that it has two parts, one piece that binds to chromatin and the rest of it forming a kind of cloud that protects the DNA from hydroxyl radicals."

However, Kadonaga doesn't think this protection was meant specifically to shield against radiation. Instead, it's probably a survival mechanism against hydroxyl radicals in the mossy environments that many terrestrial tardigrades inhabit. When the moss dries up, tardigrades shift into a dormant state of dehydration, or "anhydrobiosis," during which Dsup protection should help them survive.

The researchers say the new findings eventually could help researchers develop animal cells that can live longer under extreme environmental conditions. In biotechnology, this knowledge could be used to increase the durability and longevity of cells, such as for the production of some pharmaceuticals in cultured cells.

"In theory, it seems possible that optimized versions of Dsup could be designed for the protection of DNA in many different types of cells," said Kadonaga. "Dsup might thus be used in a range of applications, such as cell-based therapies and diagnostic kits in which increased cell survival is beneficial."

The eLife paper is dedicated to Professor Russell F. Doolittle, a UC San Diego professor emeritus of molecular biology and a pioneer in protein evolution, who carried out the evolutionary analysis of Dsup for the new research and provided guidance throughout the project.