Ecole polytechnique fédérale de Lausanne (EPFL) scientists have developed a soft artificial skin that provides haptic feedback and – thanks to a sophisticated self-sensing mechanism – has the potential to instantaneously adapt to a wearer’s movements. Applications for the new technology range from medical rehabilitation to virtual reality.

Just like our senses of hearing and vision, our sense of touch plays an important role in how we perceive and interact with the world around us. And technology capable of replicating our sense of touch – also known as haptic feedback – can greatly enhance human-computer and human-robot interfaces for applications such as medical rehabilitation and virtual reality.

Scientists at EPFL’s Reconfigurable Robotics Lab (RRL), headed by Jamie Paik, and Laboratory for Soft Bioelectronic Interfaces (LSBI), headed by Stéphanie Lacour at the School of Engineering, have teamed up to develop a soft, flexible artificial skin made of silicone and electrodes. Both labs are part of the NCCR Robotics program.

The skin’s system of soft sensors and actuators enable the artificial skin to conform to the exact shape of a wearer’s wrist, for example, and provide haptic feedback in the form of pressure and vibration. 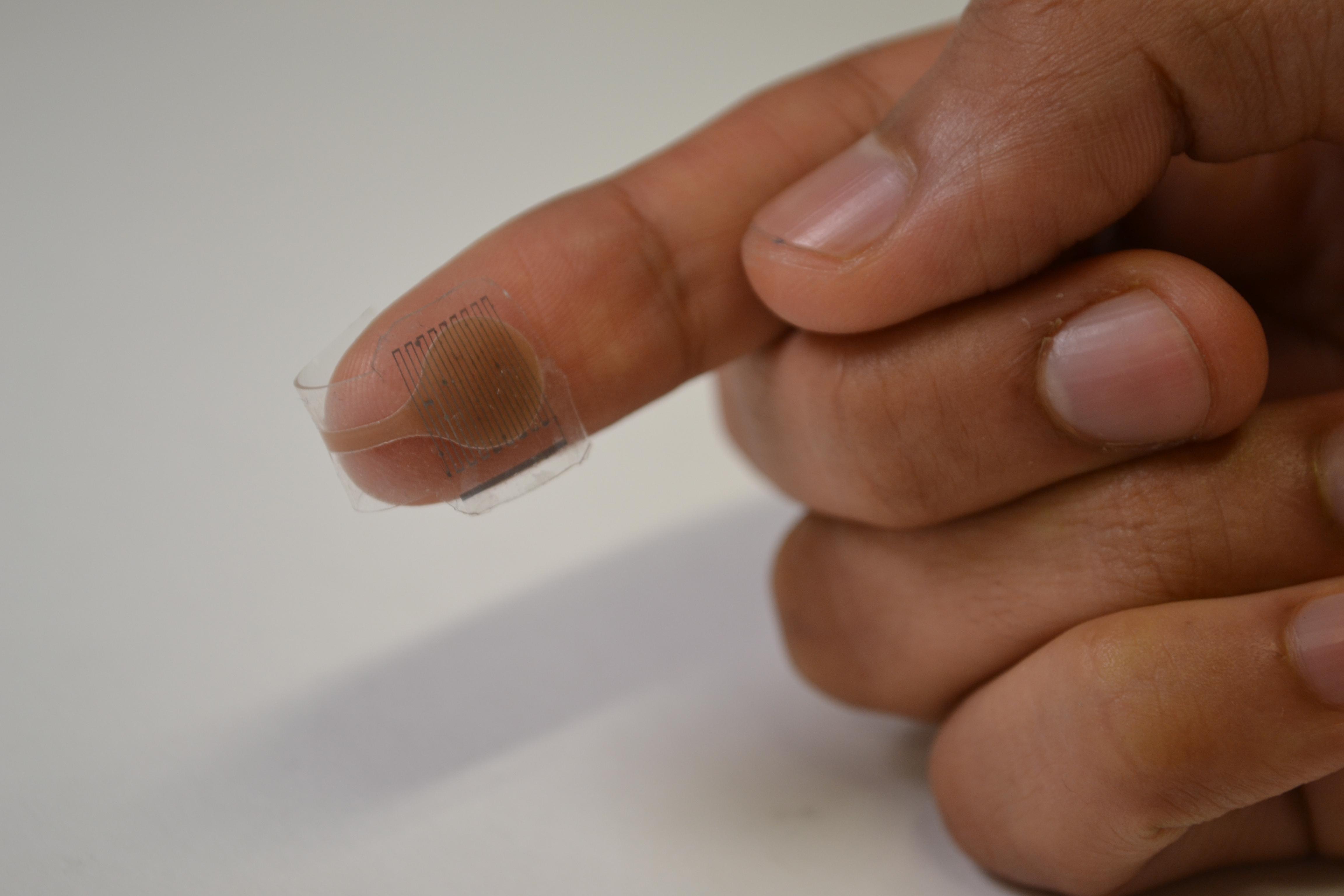 Strain sensors continuously measure the skin’s deformation so that the haptic feedback can be adjusted in real time to produce a sense of touch that’s as realistic as possible. The scientists’ work has just been published in Soft Robotics.

“This is the first time we have developed an entirely soft artificial skin where both sensors and actuators are integrated,” says Harshal Sonar, the study’s lead author. “This gives us closed-loop control, which means we can accurately and reliably modulate the vibratory stimulation felt by the user. This is ideal for wearable applications, such as for testing a patient’s proprioception in medical applications.” 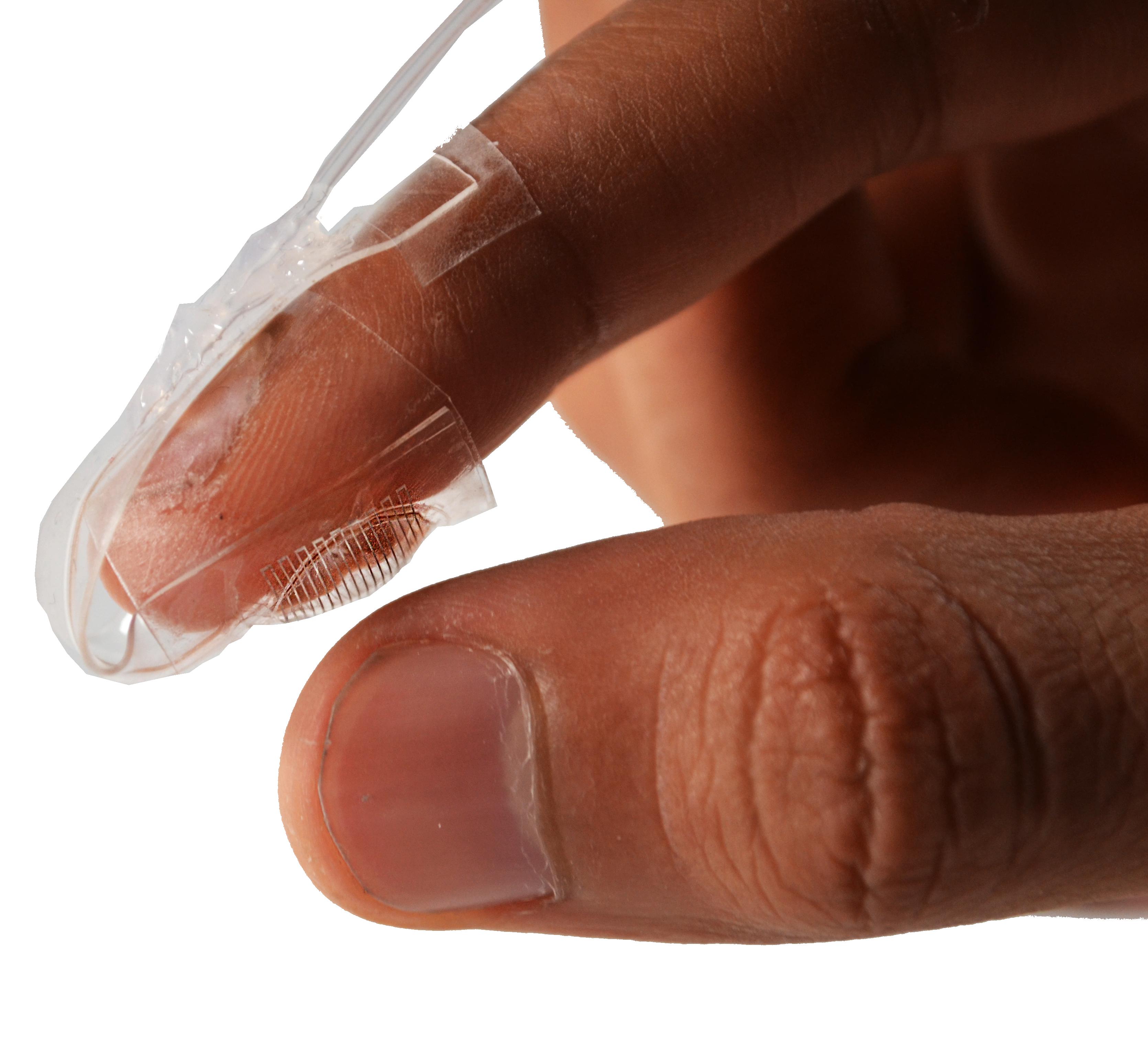 The artificial skin contains soft pneumatic actuators that form a membrane layer which can be inflated by pumping air into it. The actuators can be tuned to varying pressures and frequencies (up to 100 Hz, or 100 impulses per second). The skin vibrates when the membrane layer is inflated and deflated rapidly. A sensor layer sits on top of the membrane layer and contains soft electrodes made of a liquid-solid gallium mixture. These electrodes measure the skin’s deformation continuously and send the data to a microcontroller, which uses this feedback to fine-tune the sensation transmitted to the wearer in response to the wearer’s movements and changes in external factors.

The artificial skin can be stretched up to four times its original length for up to a million cycles. That makes it particularly attractive for a number of real-world applications. For now the scientists have tested it on users’ fingers and are still making improvements to the technology.

“The next step will be to develop a fully wearable prototype for applications in rehabilitation and virtual and augmented reality,” says Sonar. “The prototype will also be tested in neuroscientific studies, where it can be used to stimulate the human body while researchers study dynamic brain activity in magnetic resonance experiments.”