Ever since the discovery of the first exoplanet in the 1990s, astronomers have made steady progress towards finding and probing planets located in the habitable zone of their stars, where conditions can lead to the formation of liquid water and the proliferation of life.

An international study lead by Université de Montréal astronomer Björn Benneke has detected water vapor on the planet K2-18b; this represents a major discovery in the search of alien life. 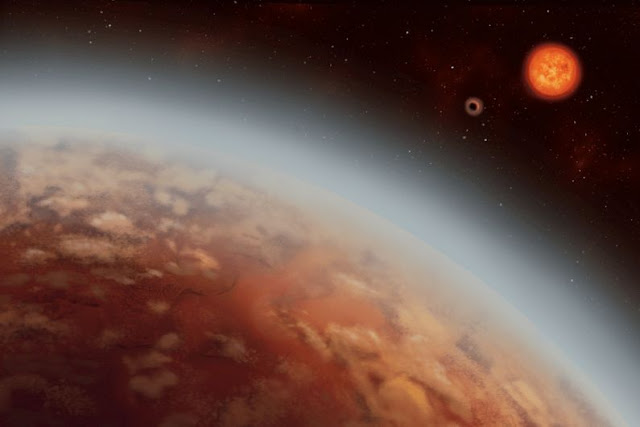 
Results from the Kepler satellite mission, which discovered nearly 2/3 of all known exoplanets to date, indicate that 5 to 20% of Earths and super-Earths are located in the habitable zone of their stars. However, despite this abundance, probing the conditions and atmospheric properties on any of these habitable zone planets is extremely difficult and has remained elusive… until now.

A new study by Professor Björn Benneke of the Institute for Research on Exoplanets at the Université de Montréal, his doctoral student Caroline Piaulet and several of their collaborators reports the detection of water vapour and perhaps even liquid water clouds in the atmosphere of the planet K2-18b.

"This represents the biggest step yet taken towards our ultimate goal of finding life on other planets, of proving that we are not alone. Thanks to our observations and our climate model of this planet, we have shown that its water vapour can condense into liquid water. This is a first", says Björn Benneke.

This exoplanet is about nine times more massive than our Earth and is found in the habitable zone of the star it orbits. This M-type star is smaller and cooler than our Sun, but due to K2-18b’s close proximity to its star, the planet receives almost the same total amount of energy from its star as our Earth receives from the Sun.

The similarities between the exoplanet K2-18b and the Earth suggest to astronomers that the exoplanet may potentially have a water cycle possibly allowing water to condense into clouds and liquid water rain to fall. This detection was made possible by combining eight transit observations - the moment when an exoplanet passes in front of its star - taken by the Hubble Space Telescope.

The Université de Montréal is no stranger to the K2-18 system located 111 light years away. The existence of K2-18b was first confirmed by Prof. Benneke and his team in a 2016 paper using data from the Spitzer Space Telescope. The mass and radius of the planet were then determined by former Université de Montréal and University of Toronto PhD student Ryan Cloutier. These promising initial results encouraged the iREx team to collect follow-up observations of the intriguing world.”

Scientists currently believe that the thick gaseous envelope of K2-18b likely prevents life as we know it from existing on the planet’s surface. However, the study shows that even these planets of relatively low mass which are therefore more difficult to study can be explored using astronomical instruments developed in recent years. By studying these planets which are in the habitable zone of their star and have the right conditions for liquid water, astronomers are one step closer to directly detecting signs of life beyond our Solar System.