Modern Humans, One Species, Many Origins

Modern humans evolved in Africa, and we now know that human groups from all over the continent contributed to that process. A group of scientists says that means it is time to stop arguing about where in Africa humans 'really' came from

In a paper published in Nature Ecology and Evolution, a group of researchers argue that our evolutionary past must be understood as the outcome of dynamic changes in connectivity, or gene flow, between early humans scattered across Africa. Viewing past human populations as a succession of discrete branches on an evolutionary tree may be misleading, they said, because it reduces the human story to a series of “splitting times” which may be illusory.

World map with land area resized to represent modern human genetic diversity and colour representing Neanderthal plus Denisovan ancestry. As can be seen, contributions from other populations to the Homo sapiens gene pool are small and unevenly distributed. Africa is disproportionately large because the great human genetic diversity – and hence the roots of humanity – are found here. 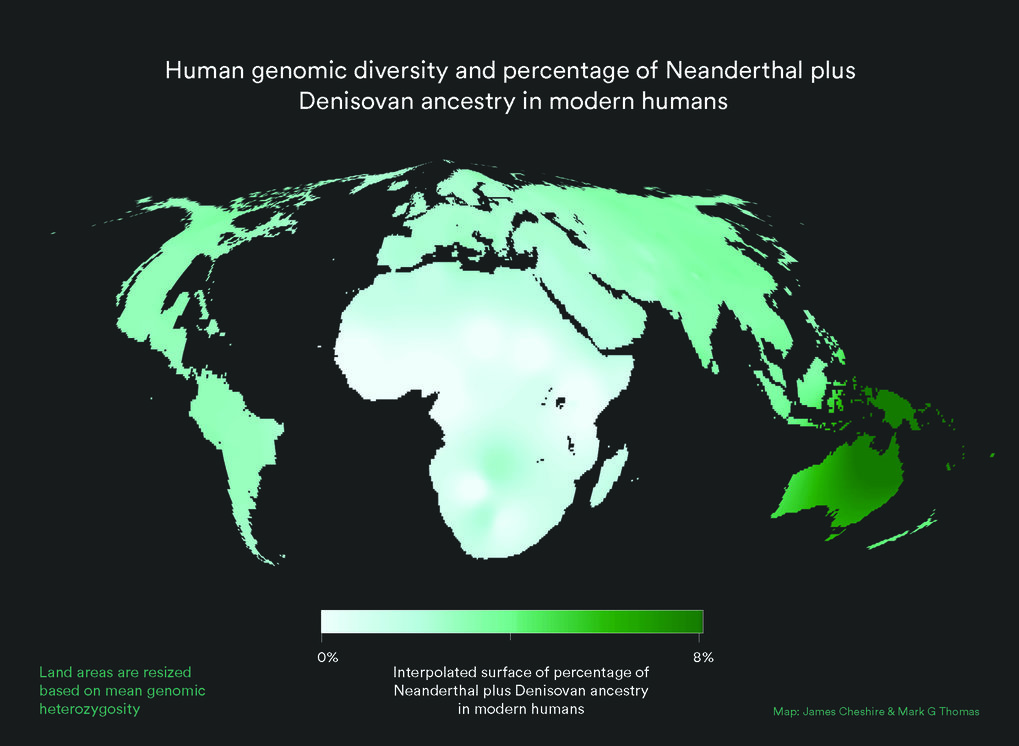 According to archaeologist Dr. Eleanor Scerri and geneticists Dr. Lounès Chikhi and Professor Mark Thomas, the quest for a single original location for modern humans is a wild goose chase. “People like us began to appear sometime between 500,000 and 300,000 years ago,” says Dr. Scerri, group leader of the Pan-African Evolution Research Group at the Max Planck Institute for the Science of Human History and lead author of the study. “That is something in the order of 8000 generations, a long time for early people to move around and explore a big space. Their movements, patterns of mixing and genetic exchanges are what gave rise to us.”

Making sense of a scattered record

“The genetics of contemporary humans are very clear. The greatest genetic diversity is found in Africans,” explains Prof. Thomas of University College London. “The old theory that we descend from regional populations spread across the Old World over the last million years or so is not supported by genetics data. Sure, non-Africans today have some ancestry from Neanderthals, and some have appreciable ancestry from the recently discovered Denisovans. And maybe other, as yet undiscovered ancient hominin groups also interbred with us, Homo sapiens. But none of this changes the fact that more than 90% of the ancestry of everybody in the world lies in Africa over the last 100,000 years.”

“The problem is that knowing that we are an African species has led many to ask the question ‘where in Africa’,” he adds. “Superficially this is a reasonable question. But when we consider the genetic patterns alongside what we know of fossils, ancient tools, and ancient climates, the ‘single region of origin’ view just doesn’t cut it, and we have to start thinking differently. This means different models, and we argue in the current paper that structured population models are the way forward.”

"Viewed through the lens of dynamic changes in connectivity – or metapopulations, to be technical – the interpretation of the available data changes," states Dr. Chikhi of the CNRS Evolution et Diversité Biologique lab at the University of Toulouse and Principal Investigator at the Gulbenkian Institute of Science in Lisbon. "Instead of a series of population splits branching off an ancestral tree, changes in connectivity between different populations over time seem a more reasonable assumption, and appear to explain several patterns of genomic diversity not explained by current alternative models. Metapopulations are the kind of model you'd expect if people were moving around and mixing over long periods and wide geographic areas. We cannot objectively identify this geographic area today from genetic data alone, but data from other disciplines suggest that the African continent represents the most likely geographical scale."

“A dynamic interconnected patchwork of populations” 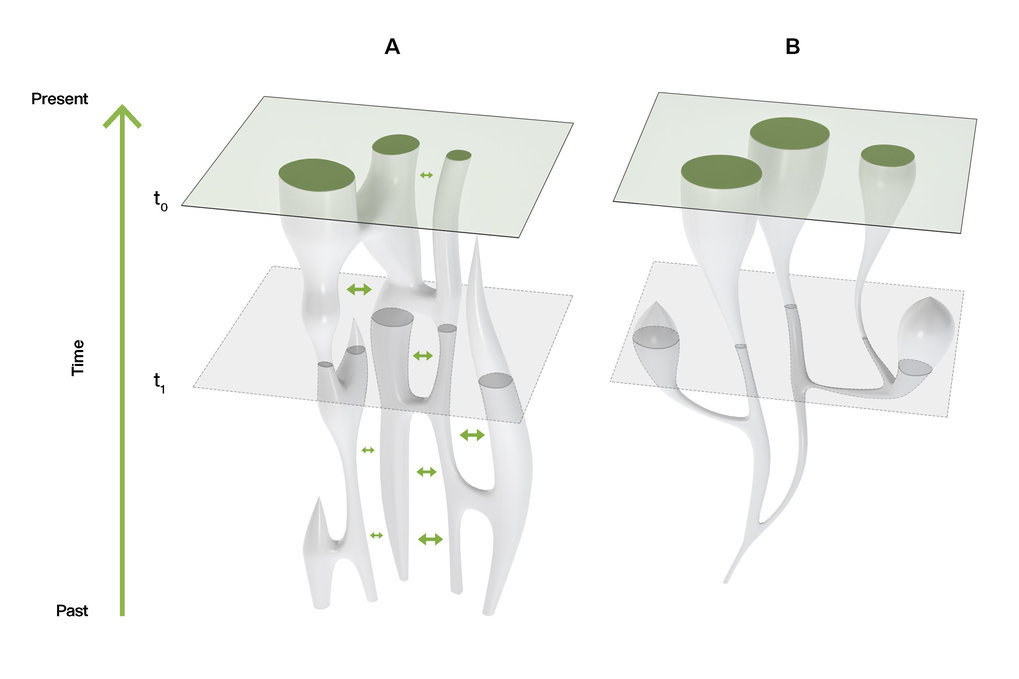 © Claudiu Pantiru/Max Planck Institute for the Science of Human History

The scientists argue that this view is not only better supported by the fossil, genetic and archaeological evidence, it also better explains the palaeoanthropological record beyond Africa.

"We see physically diverse early human fossils from across Africa, some very old genetic lineages and a pan-African shift in technology and material culture that reflects advanced cognition, including new technical and social innovations, across the continent. In other words, what you'd expect from a dynamic interconnected patchwork of populations that were at times more or less isolated from each other," says Dr. Scerri. “This would also help to explain the increasing evidence for unexpected populations, including in areas outside Africa such as the Hobbits on Flores,” she adds.

The authors stress that all this means that the scientific community may finally have the means to address complex questions in human evolutionary studies that could not be addressed previously. Dr. Chikhi notes, “We have so much new data now from genetics, archaeology and fossils, and a better understanding of how past climates and environments affected early people. We have come to a point where the old models are constraining progress in our understanding of the past.”

"A metapopulation model helps us to find a way to acknowledge the paleontological, archaeological and genetic evidence for a recent African origin with limited gene flow from non-African metapopulations, such as Neanderthals, without falling into overly polemic and restrictive debates,” adds Dr. Scerri.

The authors state that any model that would claim to represent human evolution would have to satisfactorily explain patterns of variation in genetic, morphological and cultural data components, and be consistent with the climatic changes that have shaped our ecologies during most of the last one million years.

“A structured metapopulation model does this without denying any of the latest evidence. It doesn’t require us to find a mythical region of origin, or to date clean splitting events whose meaning is far from clear. Population tree models force us to think in such terms, and this can be very misleading,” says Dr. Chikhi.

How to understand our origins

The researchers acknowledge that the past was a confusing place and that old models, while largely discredited now, have been helpful for making sense of a record with many gaps in it. Models can be very useful even when they are wrong, but when they are prioritized over the data they can constrain progress.

“Convergent evidence from different fields stress the importance of considering a metapopulation structure in our models of human evolution,” says Prof. Thomas. Dr. Chikhi adds, “This complex history of population subdivision should thus lead us to question current models of ancient population size changes, and perhaps re-interpret some of the old bottlenecks as changes in connectivity.”

“If we look at the available data through the lens of changes in connectivity, the record starts to make a lot more sense. We need such flexibility to be able to make sense of the past, or we get lost in a malaise of ever-increasing named species, failed trajectories and population trees that never existed,” says Prof. Thomas. “Science always favours the simpler explanation and it is becoming increasingly difficult to stick to old narratives when they have to become over-complicated in order to stay relevant,” he adds.

“Our African origins cannot be denied, but we definitely don’t yet have the resolution to include or exclude different bits of evidence simply because they don’t fit with a particular view. We need better reasons than that,” says Dr. Scerri.


Contacts and sources:
Petra Mader
The Max Planck Institute for the Science of Human History (MPI-SHH)