A study published in the journal Science reveals that since 1970, bird populations in the United States and Canada have declined by 29 percent, or almost 3 billion birds, signaling a widespread ecological crisis. The results show tremendous losses across diverse groups of birds and habitats -- from iconic songsters such as meadowlarks to long-distance migrants such as swallows and backyard birds including sparrows.

"Multiple, independent lines of evidence show a massive reduction in the abundance of birds," said Ken Rosenberg, the study's lead author and a senior scientist at the Cornell Lab of Ornithology and American Bird Conservancy. "We expected to see continuing declines of threatened species. But for the first time, the results also showed pervasive losses among common birds across all habitats, including backyard birds."

Data show that since 1970, the US and Canada have lost nearly 3 billion birds, a massive reduction in abundance involving hundreds of species, from beloved backyard songbirds to long-distance migrants. 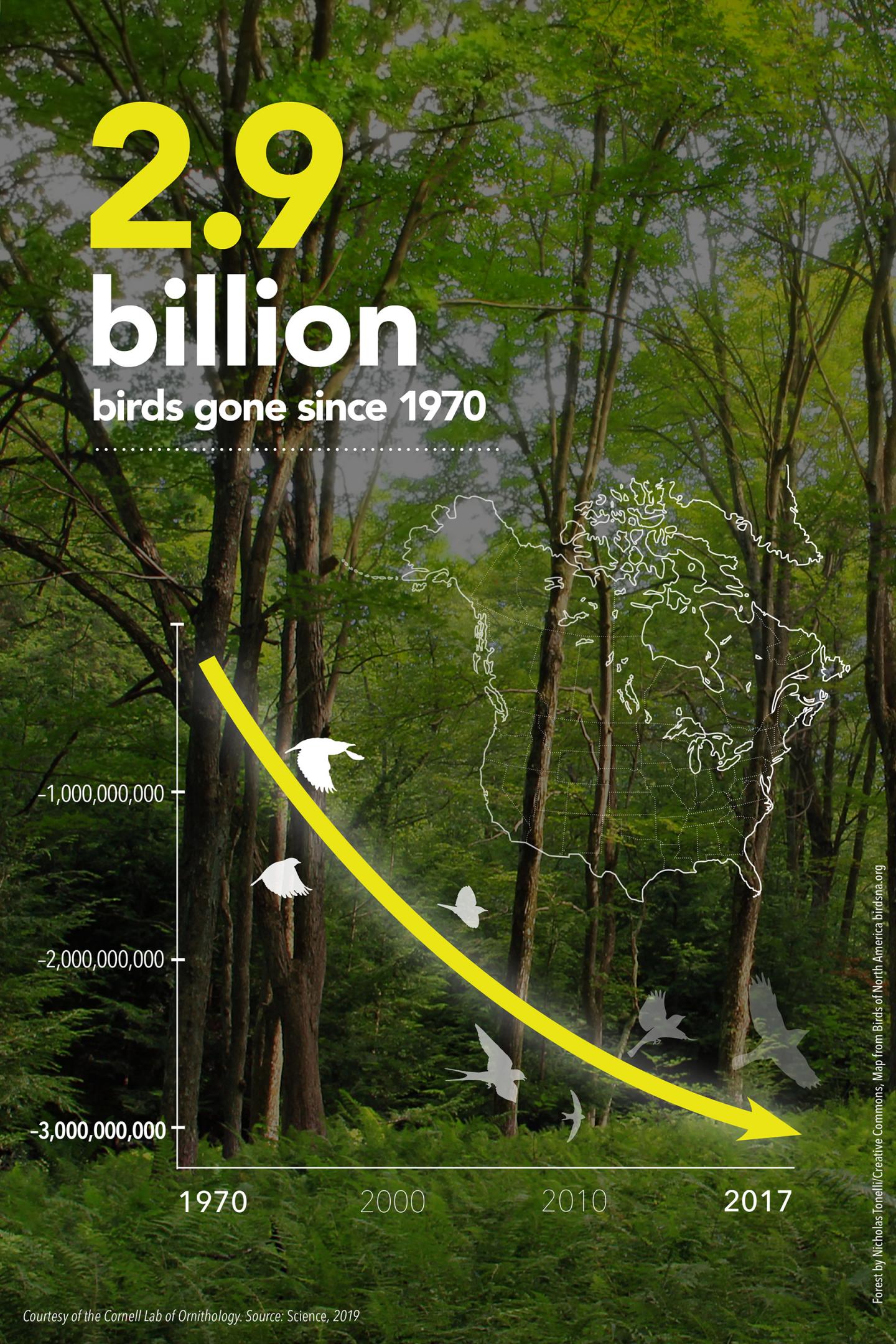 
The study notes that birds are indicators of environmental health, signaling that natural systems across the U.S. and Canada are now being so severely impacted by human activities that they no longer support the same robust wildlife populations.

Among the steep declines noted:

"These data are consistent with what we're seeing elsewhere with other taxa showing massive declines, including insects and amphibians," said coauthor Peter Marra, senior scientist emeritus and former head of the Smithsonian Migratory Bird Center and now director of the Georgetown Environment Initiative at Georgetown University. "It's imperative to address immediate and ongoing threats, both because the domino effects can lead to the decay of ecosystems that humans depend on for our own health and livelihoods -- and because people all over the world cherish birds in their own right. Can you imagine a world without birdsong?"

Evidence for the declines emerged from detection of migratory birds in the air from 143 NEXRAD weather radar stations across the continent in a period spanning over 10 years, as well as from nearly 50 years of data collected through multiple monitoring efforts on the ground.

Although the study did not analyze the causes of declines, it noted that the steep drop in North American birds parallels the losses of birds elsewhere in the world, suggesting multiple interacting causes that reduce breeding success and increase mortality. It noted that the largest factor driving these declines is likely the widespread loss and degradation of habitat, especially due to agricultural intensification and urbanization.

Other studies have documented mortality from predation by free-roaming domestic cats; collisions with glass, buildings, and other structures; and pervasive use of pesticides associated with widespread declines in insects, an essential food source for birds. Climate change is expected to compound these challenges by altering habitats and threatening plant communities that birds need to survive. More research is needed to pinpoint primary causes for declines in individual species.

Data show that since 1970, the US and Canada have lost nearly 3 billion birds, a massive reduction in abundance involving hundreds of species, from beloved backyard songbirds to long-distance migrants. 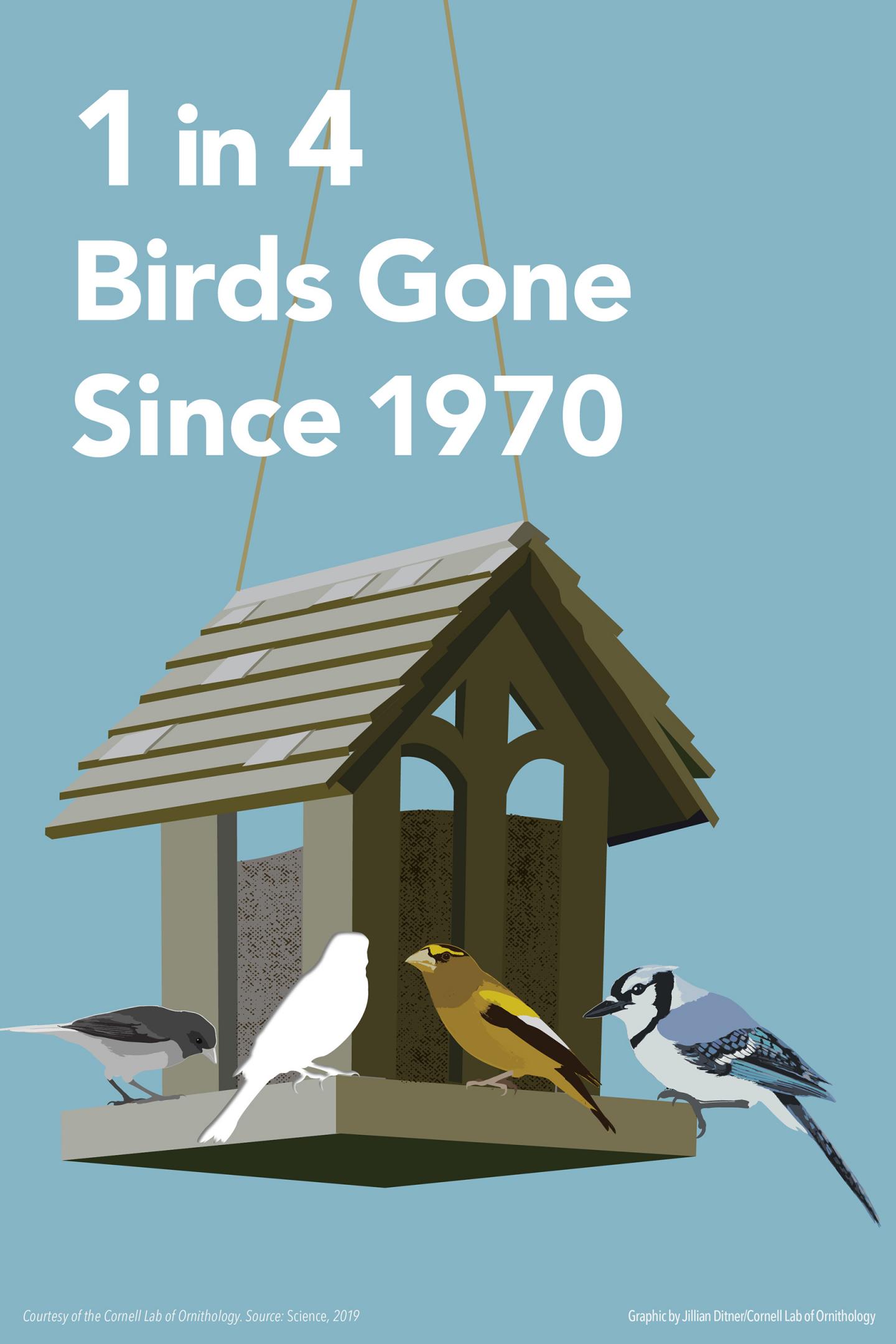 "The story is not over," said coauthor Michael Parr, president of American Bird Conservancy. "There are so many ways to help save birds. Some require policy decisions such as strengthening the Migratory Bird Treaty Act. We can also work to ban harmful pesticides and properly fund effective bird conservation programs. Each of us can make a difference with everyday actions that together can save the lives of millions of birds -- actions like making windows safer for birds, keeping cats indoors, and protecting habitat."

The study also documents a few promising rebounds resulting from galvanized human efforts. Waterfowl (ducks, geese, and swans) have made a remarkable recovery over the past 50 years, made possible by investments in conservation by hunters and billions of dollars of government funding for wetland protection and restoration. Raptors such as the Bald Eagle have also made spectacular comebacks since the 1970s, after the harmful pesticide DDT was banned and recovery efforts through endangered species legislation in the U.S. and Canada provided critical protection.

"It's a wake-up call that we've lost more than a quarter of our birds in the U.S. and Canada," said coauthor Adam Smith from Environment and Climate Change Canada. "But the crisis reaches far beyond our individual borders. Many of the birds that breed in Canadian backyards migrate through or spend the winter in the U.S. and places farther south -- from Mexico and the Caribbean to Central and South America. What our birds need now is an historic, hemispheric effort that unites people and organizations with one common goal: bringing our birds back."


Organizations Behind the Study:

American Bird Conservancy (ABC) is a nonprofit organization dedicated to conserving birds and their habitats throughout the Americas. With an emphasis on achieving results and working in partnership, we take on the greatest problems facing birds today, innovating and building on rapid advancements in science to halt extinctions, protect habitats, eliminate threats, and build capacity for bird conservation.

Bird Conservancy of the Rockies (Bird Conservancy) is a Colorado-based nonprofit that works to conserve birds and their habitats through an integrated approach of science, education, and land stewardship. Our work extends from the Rockies to the Great Plains, Mexico, and beyond. Together, we are improving native bird populations, the land, and the lives of people. Bird Conservancy's vision is a future where birds are forever abundant, contributing to healthy landscapes and inspiring human curiosity and love of nature.

The Cornell Lab of Ornithology is a nonprofit member-supported organization dedicated to interpreting and conserving the earth's biological diversity through research, education, and citizen science focused on birds.

Environment and Climate Change Canada is Canada's lead federal department for a wide range of environmental issues. It informs Canadians about protecting and conserving our natural heritage, and ensuring a clean, safe, and sustainable environment for present and future generations.

Advancing Georgetown's commitment to the environment, sustainability, and equitability, the Georgetown Environment Initiative brings together students, faculty, and staff from across disciplines -- from the natural sciences, social sciences, humanities, public policy, law, medicine, and business -- to contribute to global efforts to deepen understanding of our world and to transform the Earth's stewardship.

The Smithsonian Migratory Bird Center (SMBC) is dedicated to understanding, conserving, and championing the grand phenomenon of bird migration. Founded in 1991, and part of the Smithsonian Conservation Biology Institute, SMBC scientists work to conserve migratory species through research and public education that foster a better understanding of migratory birds and the need to protect diverse habitats across the Western Hemisphere.