World's Largest Frogs Build Their Own Ponds for Their Young

The first example of "nest"-building in an African amphibian, the Goliath frog, has been described in a new article in the Journal of Natural History, and could explain why they have grown to be giant.

Researchers observed adult Goliath frogs in the wild and found that they move rocks weighing up to 2kg while building ponds for their young, which they then guard. Goliath frogs themselves weigh up to 3.3kg and their bodies reach over 34cm, without including their legs.


An adult Goliath frog caught by a local froghunter. 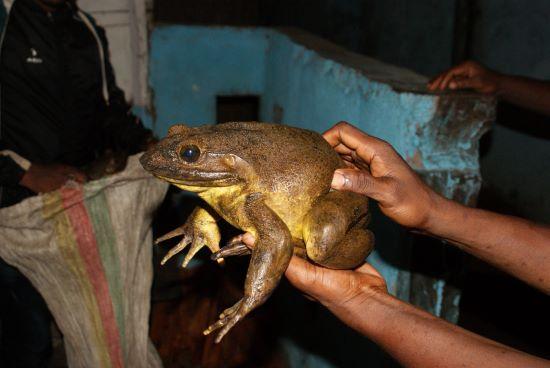 "Goliath frogs are not only huge, but our discovery shows they seem to be attentive parents as well," says author Marvin Schäfer from the Berlin Natural History Museum. "The little ponds they make at the edges of fast-flowing rivers provide their eggs and tadpoles with a safe haven from sometimes torrential waters, as well as from the many predators living there. We think that the heavy work they put into excavation and moving rocks may explain why gigantism evolved in these frogs in the first place."

Despite their renown, they're found only in Cameroon and Equatorial Guinea and little is known about their biology, particularly their reproductive behaviour. Numbers of the endangered species have declined by more than 50 per cent in just 10 years, due to overhunting and deforestation; and researchers first learned about the unusual level of parental care they provide from local frog hunters, who trap adults for bush meat.

To investigate the behaviour, two researchers waded along opposite edges of the Mpoula River looking for breeding sites. At first, they could only distinguish them by finding eggs or tadpoles. However, they learned to spot material excavated and piled up in a way that defied the effects of the water current. They identified 22 potential breeding sites, 14 of which contained nearly 3,000 eggs each, spread across the entire area. At the nest which showed the most recent signs of activity, they recorded a time-lapse video using a camera trap. 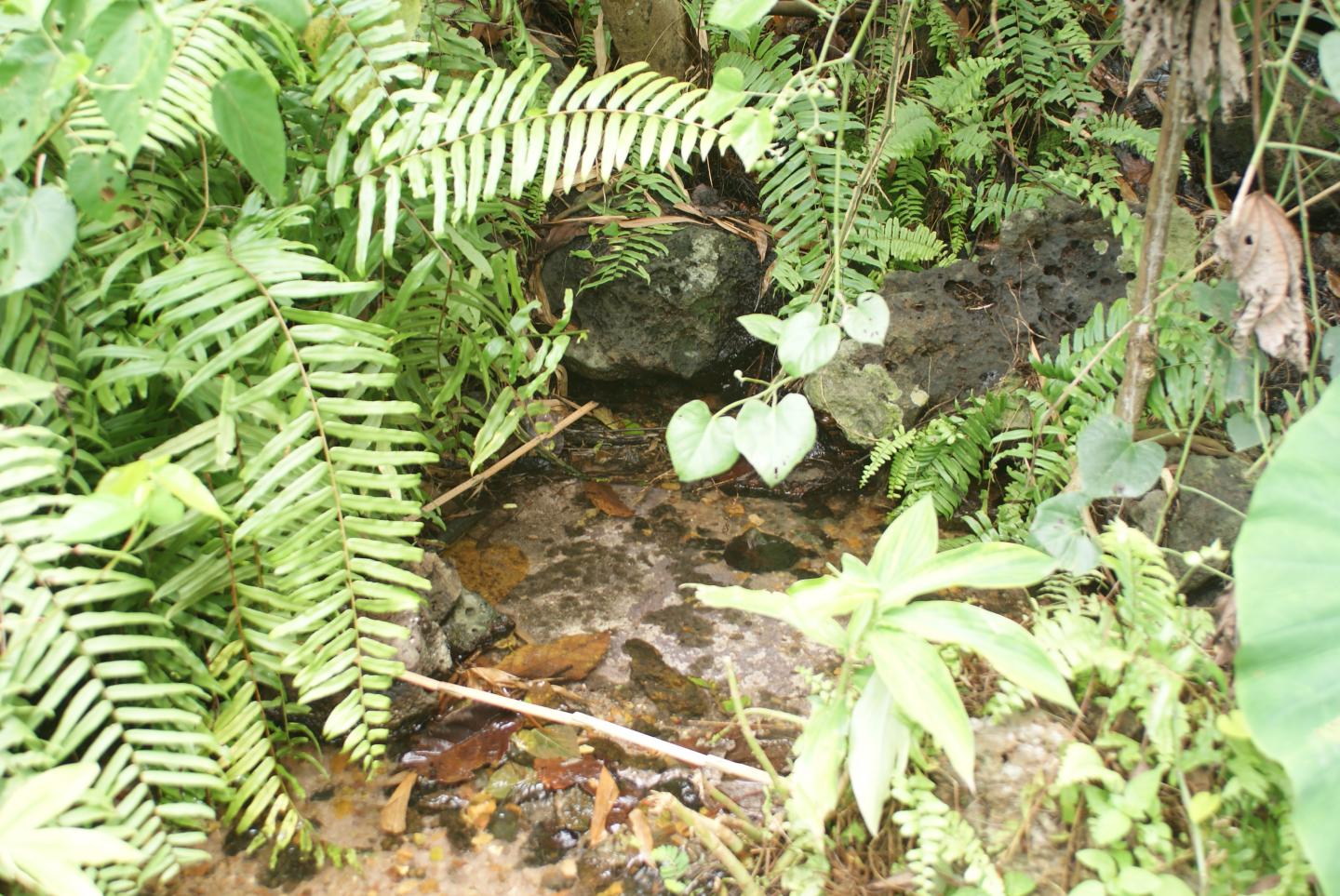 The scientists found that Goliath frogs create three different types of pond. For some, they simply clear naturally-occurring rock-pools of leaf-litter and debris. The effect is still strikingly different to surrounding puddles, which have thick layers of leaves, debris and gravel. For the second type, frogs dig out leaf litter and gravel from shallow pools and push it to the edges, forming a dam. Dams are most obvious in the third type, for which frogs clear depressions of shallow water of any large stones, moving them to edge and creating circular pond. This was the most reliable type, as eggs were least likely to spill out or become over-flooded after heavy rain.

Infrared time-lapse revealed an adult spending all night guarding a nest from predators, only ending the vigil just before dawn. The scientists were unable to determine which sex was responsible for building ponds or which for guarding them, although one hunter who described the behaviours in detail suggested that males do the construction while females are the guards. They didn't directly observe the cleaning or digging, but over five days followed progress of a nest, from the first digging attempts to the depositing of eggs.

Recently metamorphed juvenile frog, often found in vegetation near nesting sites, indicating they stay around their nursery for some time. 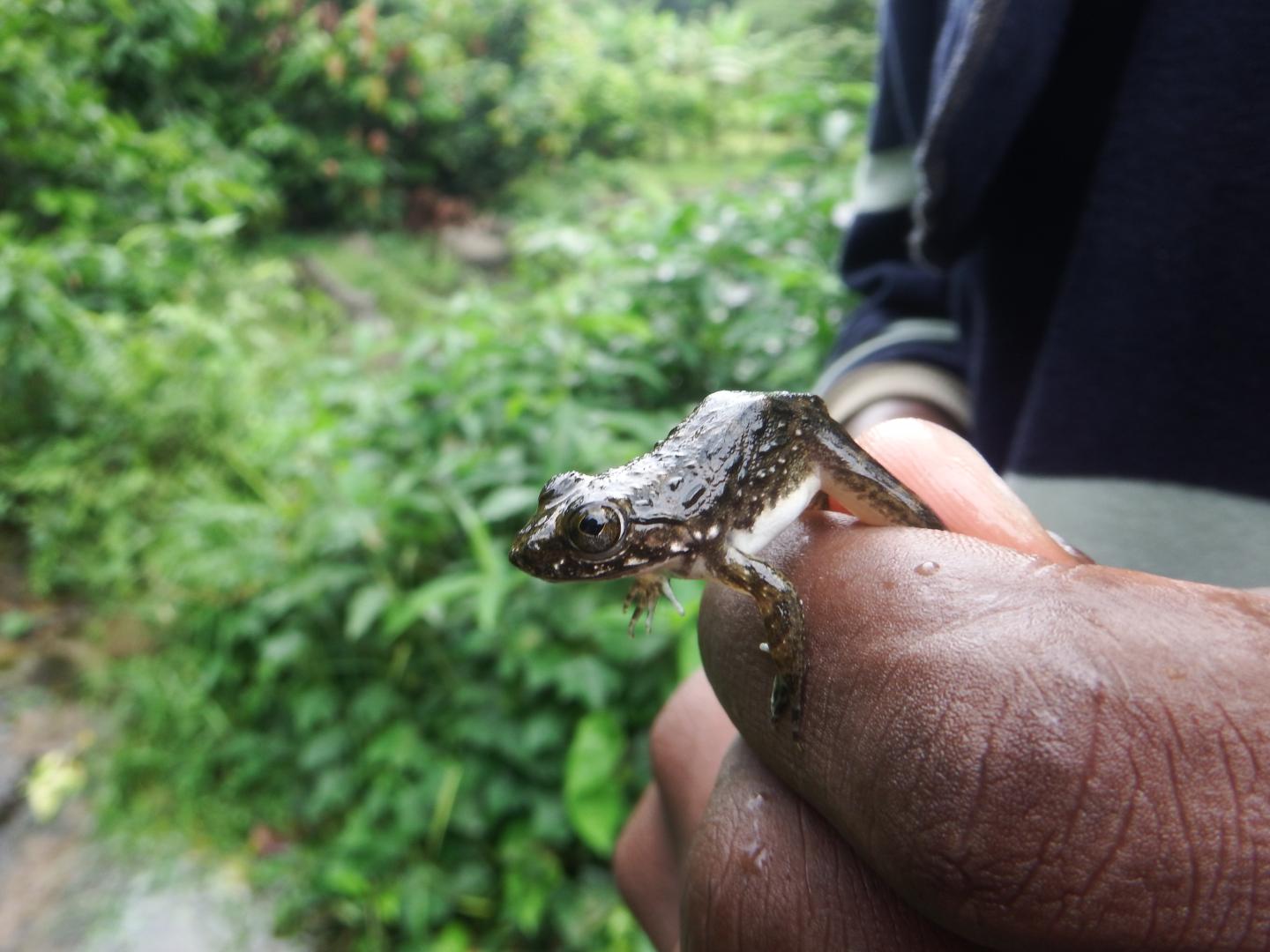 Dr Mark-Oliver Rödel, project leader and president of Frogs & Friends, says: "The fact that we've only just discovered these behaviours shows how little we know about even some of the most spectacular creatures on our planet. We hope that our findings, combined with further ongoing research, will improve our understanding of the needs of the Goliath frog so we can help support its continued survival."