People in Ethiopia did not live in low valleys during the last ice age. Instead they lived high up in the inhospitable Bale Mountains. There they had enough water, built tools out of obsidian and relied mainly on giant rodents for nourishment. This discovery was made by an international team of researchers led by Martin Luther University Halle-Wittenberg (MLU) in cooperation with the Universities of Cologne, Bern, Marburg, Addis Ababa and Rostock. In the current issue of "Science", the researchers provide the first evidence that our African ancestors had already settled in the mountains during the Palaeolithic period, about 45,000 years ago.

The Fincha Habera rock shelter in the Ethiopian Bale Mountains served as a residence for prehistoric hunter-gatherers. 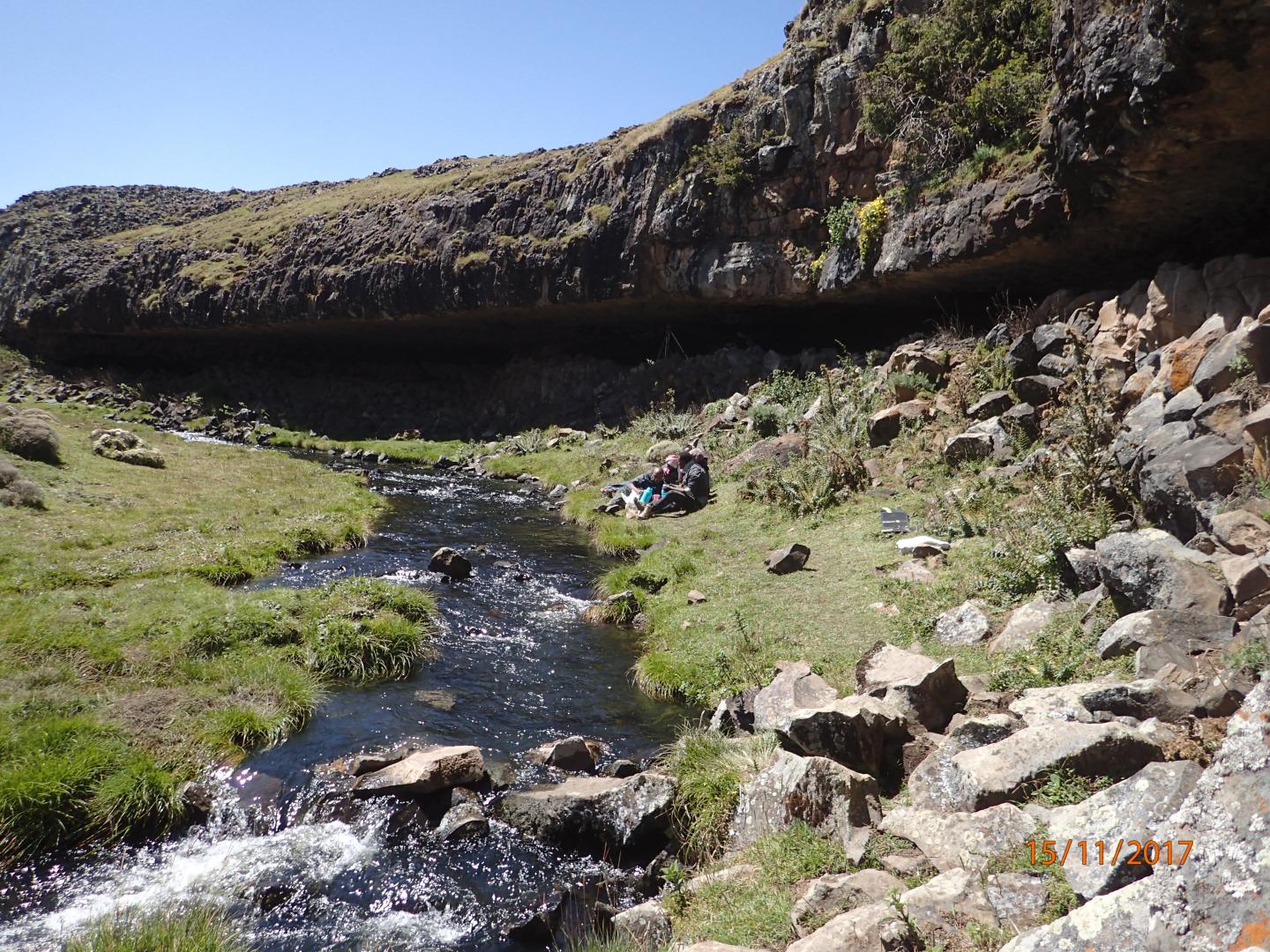 At around 4,000 metres above sea level, the Bale Mountains in southern Ethiopia are a rather inhospitable region. There is a low level of oxygen in the air, temperatures fluctuate sharply, and it rains a lot. "Because of these adverse living conditions, it was previously assumed that humans settled in the Afro-Alpine region only very lately and for short periods of time," says Professor Bruno Glaser, an expert in soil biogeochemistry at MLU. Together with an international team of archaeologists, soil scientists, palaeoecologists, and biologists, he has been able to show that this assumption is incorrect. People had already begun living for long periods of time on the ice-free plateaus of the Bale Mountains about 45,000 years ago during the Middle Pleistocene Epoch. By then the lower valleys were already too dry for survival.

For several years, the research team investigated a rocky outcrop near the settlement of Fincha Habera in the Bale Mountains in southern Ethiopia. During their field campaigns, the scientists found a number of stone artefacts, clay fragments and a glass bead. "We also extracted information from the soil as part of our subproject," says Glaser. Based on the sediment deposits in the soil, the researchers from Halle were able to carry out extensive biomarker and nutrient analyses as well as radiocarbon dating and thus draw conclusions as to how many people lived in the region and when they lived there. For this work, the scientists also developed a new type of palaeothermometer which could be used to roughly track the weather in the region - including temperature, humidity and precipitation. Such analyses can only be done in natural areas with little contamination, otherwise the soil profile will have changed too much by more recent influences. The inhospitable conditions of the Bale Mountains present ideal conditions for such research since the soil has only changed on the surface during the last millennia.

Using this data, the researchers were not only able to show that people have been there for a longer period of time. The analyses may also have uncovered the reasons for this: during the last ice age the settlement of Fincha Habera was located beyond the edge of the glaciers. According to Glaser, there was a sufficient amount of water available since the glaciers melted in phases. The researchers are even able to say what people ate: giant mole rats, endemic rodents in the region the researchers investigated. These were easy to hunt and provided enough meat, thereby providing the energy required to survive in the rough terrain. Humans probably also settled in the area because there was deposit of volcanic obsidian rock nearby from which they could mine obsidian and make tools out of it. "The settlement was therefore not only comparatively habitable, but also practical," concludes Glaser.

The soil samples also reveal a further detail about the history of the settlement. Starting around 10,000 years before the Common Era, the location was populated by humans for a second time. At this time, the site was increasingly used as a hearth. And: "For the first time, the soil layer dating from this period also contains the excrement of grazing animals," says Glaser.

According to the research team, the new study in "Science" not only provides new insights into the history of human settlement in Africa, it also imparts important information about the human potential to adapt physically, genetically and culturally to changing environmental conditions. For example, some groups of people living in the Ethiopian mountains today can easily contend with low levels of oxygen in the air.

This research was funded by the German Research Foundation (DFG) in the framework of the joint Ethio-European DFG Research Unit 2358 "The Mountain Exile Hypothesis." Additional funding was provided by the Swiss National Science Foundation (SNSF grant no. 200021E-165446/1).