"The discovery of a tenth-century AD high-status burial at Prague Castle in 1928 led to multiple identifications in the context of two world wars and the Cold War."

Used as a propaganda tool by the Nazis and Soviets during the Second World War and Cold War, the remains of a 10th century male, unearthed beneath Prague Castle in 1928, have been the subject of continued debate and archaeological manipulation.

The mysterious skeleton and associated grave goods, including a sword and two knives, were identified as Viking by the Nazis, as a Slavonic warrior by the Soviets and became part of the Czech independence movement in more recent years.

Photograph of grave IIIN199, shortly after excavation in 1928. 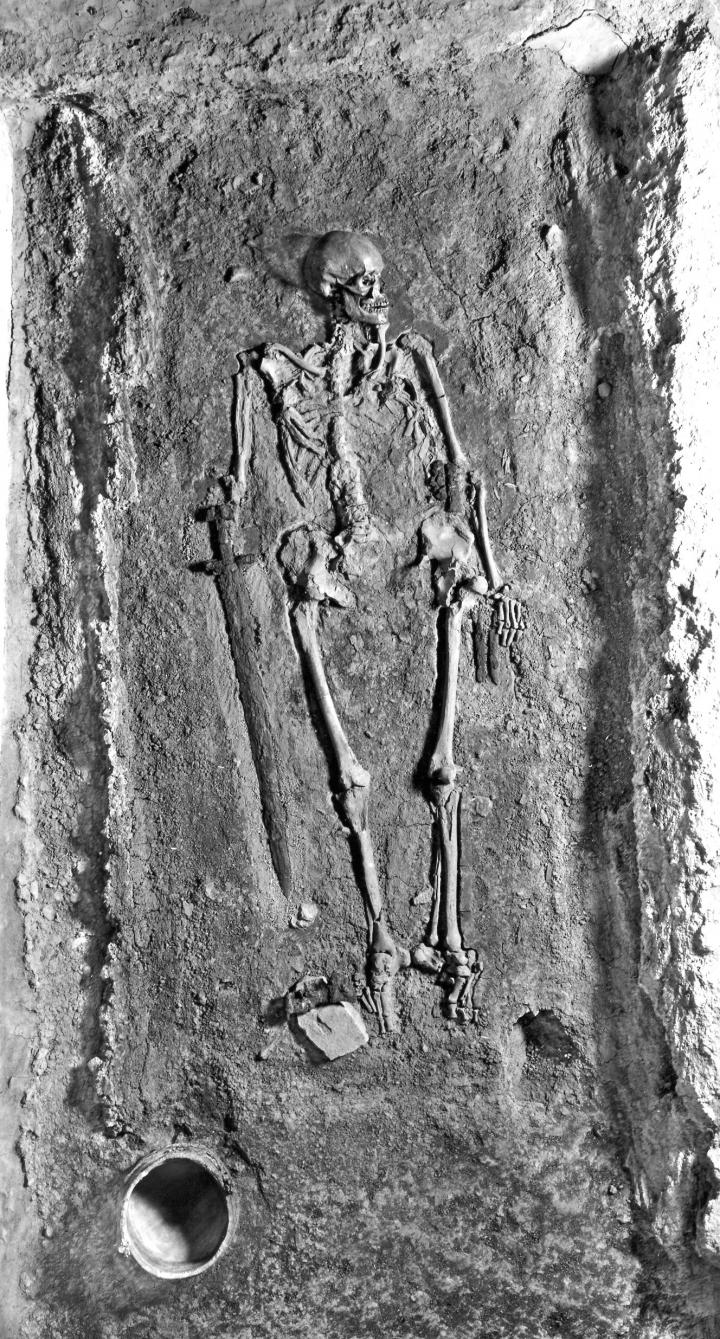 Credit: Institute of Archaeology of the CAS, Prague Castle Excavations

Writing in the journal Antiquity, a team of archaeologists, including two emeritus professors from the University of Bristol, unravel the complex story of the discovery of the remains, which were kept out of public view until 2004, and attempt to answer the decades-long question of who this man actually was.

The remains were discovered under the courtyard of Prague Castle in July 1928 as part of an excavation project by the National Museum of the newly established Czechoslovakia to discover the earliest phases of the castle.

The body was located on the edge of an old burial ground from when a hill fort was built on the site, likely dating to AD 800-950/1000.

It was discovered by Ivan Borkovský, a Ukrainian who fought for both the Austro-Hungarians and the Russians in the early 20th century, before escaping to Czechoslovakia in 1920 but he did not immediately publicise or publish anything about the remains or the artefacts.

In 1939, the German army invaded Czechoslovakia and immediately accused Borkovský of not publishing because he was part of a Czech conspiracy to hide the truth¬--that the remains were German, rather than Slavic (or maybe Viking).

As a German ancestor, the remains supported the German propagandist efforts to argue for a German heritage that 'extended over national borders and reached deep into the past'.

Under the Nazi regime, the remains became 'proof' for the Germanic, rather than Slavic, origin of Prague Castle.

When Borkovský published a book identifying the oldest Slavic pottery in central Europe, the Nazi's condemned the text and he was forced to withdraw it under threat of imprisonment in a concentration camp. When he published the Prague Castle remains a year later, it was overt in its 'Nazi-influenced Nordic interpretation'.

After the war, Czechoslovakia was occupied by the Soviets and in 1945, Borkovský narrowly escaped being sent to a Siberian Gulag because of former anti-Communist activities.

He explained that he had been forced into the pro-Nazi interpretation of the remains and published a second article in 1946 which interpreted the burial 'as that of an important person who was related to the early Western Slav Przemyslid dynasty'.

Lead author Professor Nicholas Saunders, from Bristol's Department of Anthropology and Archaeology, said: "A number of studies have recently begun to re-interpret the remains and ours provides a new analysis.

"The goods found with the remains are a mix of foreign (non-Czech) items, such as the sword, axe and fire striker (a common piece of Viking equipment), and domestic objects, such as the bucket and the knives.

"The sword is especially unique as it is the only one discovered in 1,500 early medieval graves so far found in Prague Castle.

"Perhaps he was a Slav from a neighbouring region, who had mastered Old Norse as well as Slavonic, or perhaps he regarded himself as a genuine Viking.

"Identities were complex in the medieval period, and the story of Borkovský and the Prague Castle warrior grave reminds us that the identities of such past people frequently fuel modern political conflicts."