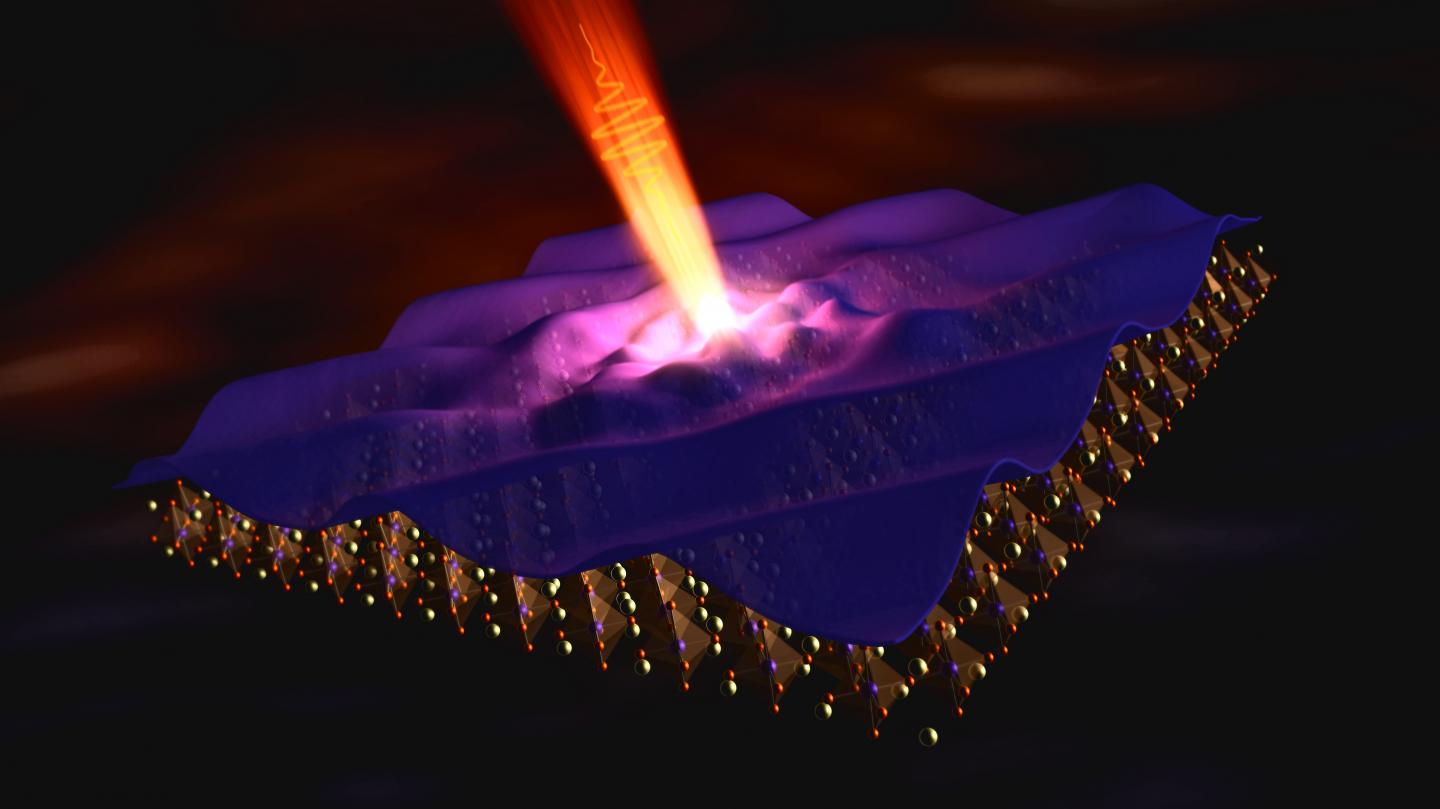 Now researchers at the University of Illinois at Urbana-Champaign, collaborating with scientists at the SLAC National Accelerator Laboratory, have shed new light on how these disparate states can exist adjacent to one another. Illinois Physics post-doctoral researcher Matteo Mitrano, Professor Peter Abbamonte, and their team applied a new x-ray scattering technique, time-resolved resonant soft x-ray scattering, taking advantage of the state-of-the-art equipment at SLAC. This method enabled the scientists to probe the striped charge order phase with an unprecedented energy resolution. This is the first time this has been done at an energy scale relevant to superconductivity.

The researchers further demonstrated that, if the charge order melts, the electrons in the system will reform the striped areas of charge order within tens of picoseconds. As it turns out, this process obeys a universal scaling law. To understand what they were seeing in their experiment, Mitrano and Abbamonte turned to Illinois Physics Professor Nigel Goldenfeld and his graduate student Minhui Zhu, who were able to apply theoretical methods borrowed from soft condensed matter physics to describe the formation of the striped patterns.

Professor Nigel Goldenfeld (right) and his graduate student Minhui Zhu pose outside the Institute for Genomic Biology on the University of Illinois at Urbana-Champaign Campus. Goldenfeld and Zhu elucidated the experimental observations using a theory borrowed from the field of soft condensed matter, establishing that charge order stripe formation in cuprate superconductors adhere to a universal scaling law, akin to pattern formation in liquids and polymers. 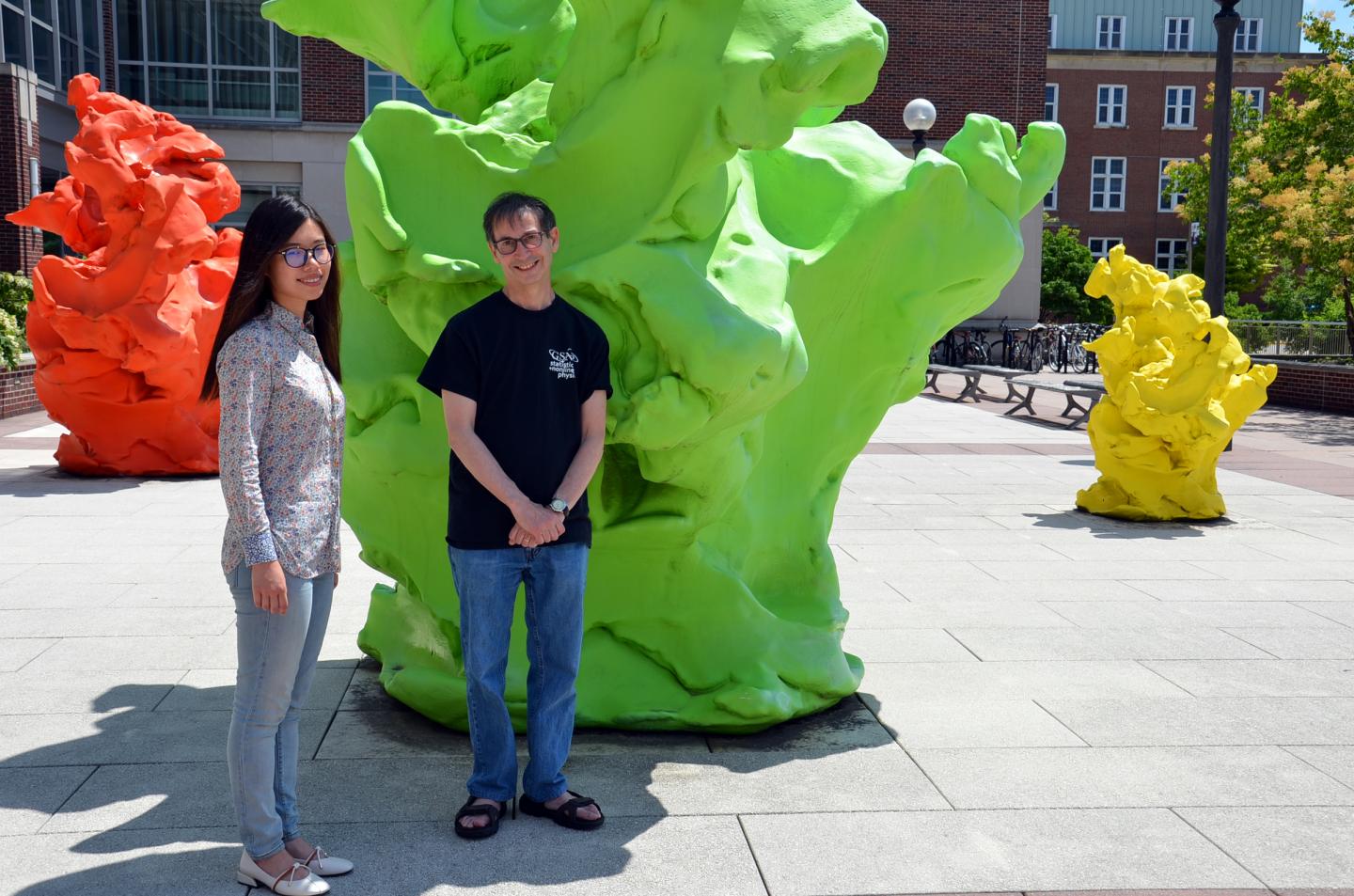 
These findings were published on August 16, 2019, in the online journal Science Advances.

That discovery precipitated a flood of research into the cuprates. In time, scientists found experimental evidence of inhomogeneities in LBCO and similar materials: insulating and metallic phases that were coexisting. In 1998, Illinois Physics Professor Eduardo Fradkin, Stanford Professor Steven Kivelson, and others proposed that Mott insulators--materials that ought to conduct under conventional band theory but insulate due to repulsion between electrons--are able to host stripes of charge order and superconductivity. La2CuO4, the parent compound of LBCO, is an example of a Mott insulator. As Ba is added to that compound, replacing some La atoms, stripes form due to the spontaneous organization of holes--vacancies of electrons that act like positive charges.

Professor Peter Abbamonte (middle, in navy sweater) and postdoctoral researcher Matteo Mitrano (right, in white dress shirt) pose with their team at the SLAC National Accelerator Laboratory in Menlo Park, California. The experimental team used a new investigative technique called time-resolved resonant soft x-ray scattering, to probe the striped charge order phase in a well-studied cuprate superconductor, with an unprecedented energy resolution, finding that superconductivity in cuprates may be mediated by charge-order fluctuations. This is the first time such an experiment has been done at an energy scale relevant to superconductivity. 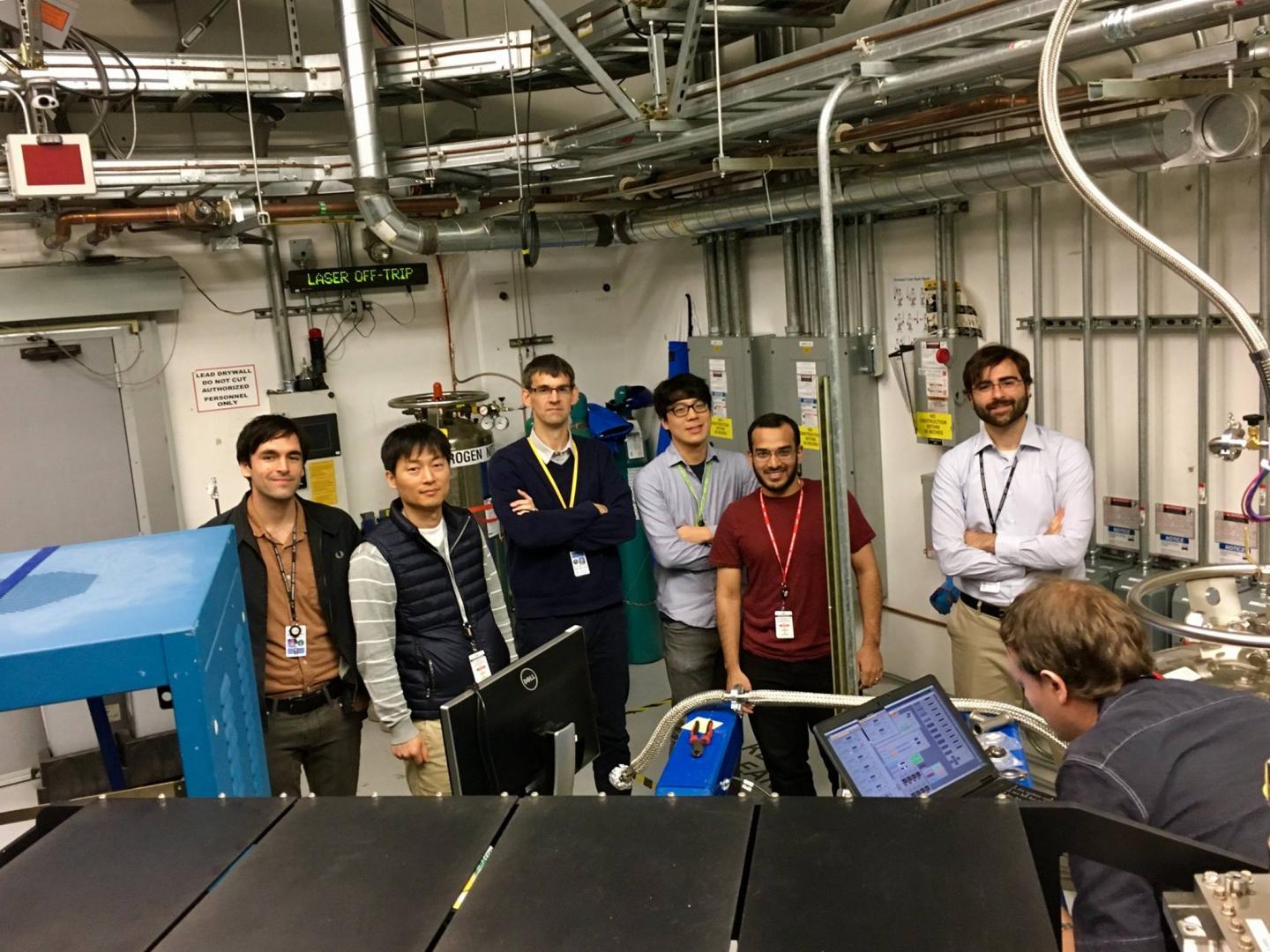 Still, other questions regarding the behavior of the stripes remained. Are the areas of charge order immobile? Do they fluctuate?

"The conventional belief is that if you add these doped holes, they add a static phase which is bad for superconductivity--you freeze the holes, and the material cannot carry electricity," Mitrano comments. "If they are dynamic--if they fluctuate--then there are ways in which the holes could aid high-temperature superconductivity."

Probing the fluctuations in LBCO

To understand what exactly the stripes are doing, Mitrano and Abbamonte conceived of an experiment to melt the charge order and observe the process of its reformation in LBCO. Mitrano and Abbamonte reimagined a measurement technique called resonant inelastic x-ray scattering, adding a time-dependent protocol to observe how the charge order recovers over a duration of 40 picoseconds. The team shot a laser at the LBCO sample, imparting extra energy into the electrons to melt the charge order and introduce electronic homogeneity.

"We used a novel type of spectrometer developed for ultra-fast sources, because we are doing experiments in which our laser pulses are extremely short," Mitrano explains. "We performed our measurements at the Linac Coherent Light Source at SLAC, a flagship in this field of investigation. Our measurements are two orders of magnitude more sensitive in energy than what can be done at any other conventional scattering facility."

Abbamonte adds, "What is innovative here is using time-domain scattering to study collective excitations at the sub-meV energy scale. This technique was demonstrated previously for phonons. Here, we have shown the same approach can be applied to excitations in the valence band."

Hints of a mechanism for superconductivity

The first significant result of this experiment is that the charge order does in fact fluctuate, moving with an energy that almost matches the energy established by the critical temperature of LBCO. This suggests that Josephson coupling may be crucial for superconductivity.

After melting the charge order, Mitrano and Abbamonte measured the recovery of the stripes as they evolved in time. As the charge order approached its full recovery, it followed an unexpected time dependence. This result was nothing like what the researchers had encountered in the past. What could possibly explain this?

The answer is borrowed from the field of soft condensed matter physics, and more specifically from a scaling law theory Goldenfeld had developed two decades prior to describe pattern formation in liquids and polymers. Goldenfeld and Zhu demonstrated the stripes in LBCO recover according to a universal, dynamic, self-similar scaling law.

Goldenfeld explains, "By the mid-1990s, scientists had an understanding of how uniform systems approach equilibrium, but how about stripe systems? I worked on this question about 20 years ago, looking at the patterns that emerge when a fluid is heated from below, such as the hexagonal spots of circulating, upwelling white flecks in hot miso soup. Under some circumstances these systems form stripes of circulating fluid, not spots, analogous to the stripe patterns of electrons in the cuprate superconductors. And when the pattern is forming, it follows a universal scaling law. This is exactly what we see in LBCO as it reforms its stripes of charge order."

Through their calculations, Goldenfeld and Zhu were able to elucidate the process of time-dependent pattern reformation in Mitrano and Abbamonte's experiment. The stripes reform with a logarithmic time dependence--a very slow process. Adherence to the scaling law in LBCO further implies that it contains topological defects, or irregularities in its lattice structure. This is the second significant result from this experiment.

Zhu comments, "It was exciting to be a part of this collaborative research, working with solid-state physicists, but applying techniques from soft condensed matter to analyze a problem in a strongly correlated system, like high-temperature superconductivity. I not only contributed my calculations, but also picked up new knowledge from my colleagues with different backgrounds, and in this way gained new perspectives on physical problems, as well as new ways of scientific thinking."

In future research, Mitrano, Abbamonte, and Goldenfeld plan to further probe the physics of charge order fluctuations with the goal of completely melting the charge order in LBCO to observe the physics of stripe formation. They also plan similar experiments with other cuprates, including yttrium barium copper oxide compounds, better known as YBCO.

Goldenfeld sees this and future experiments as ones that could catalyze new research in HTS: "What we learned in the 20 years since Eduardo Fradkin and Steven Kivelson's work on the periodic modulation of charge is that we should think about the HTS as electronic liquid crystals," he states. "We're now starting to apply the soft condensed matter physics of liquid crystals to HTS to understand why the superconducting phase exists in these materials."