A team of scientists in Korea and the United States have invented a device that can control neural circuits using a tiny brain implant controlled by a smartphone. Researchers developed a soft neural implant capable of delivering multiple drugs and colour lights which neuroscientists believe can speed up efforts to uncover brain diseases such as Parkinson's, Alzheimer's, addiction, depression, and pain

Researchers, publishing in Nature Biomedical Engineering, believe the device can speed up efforts to uncover brain diseases such as Parkinson's, Alzheimer's, addiction, depression, and pain. 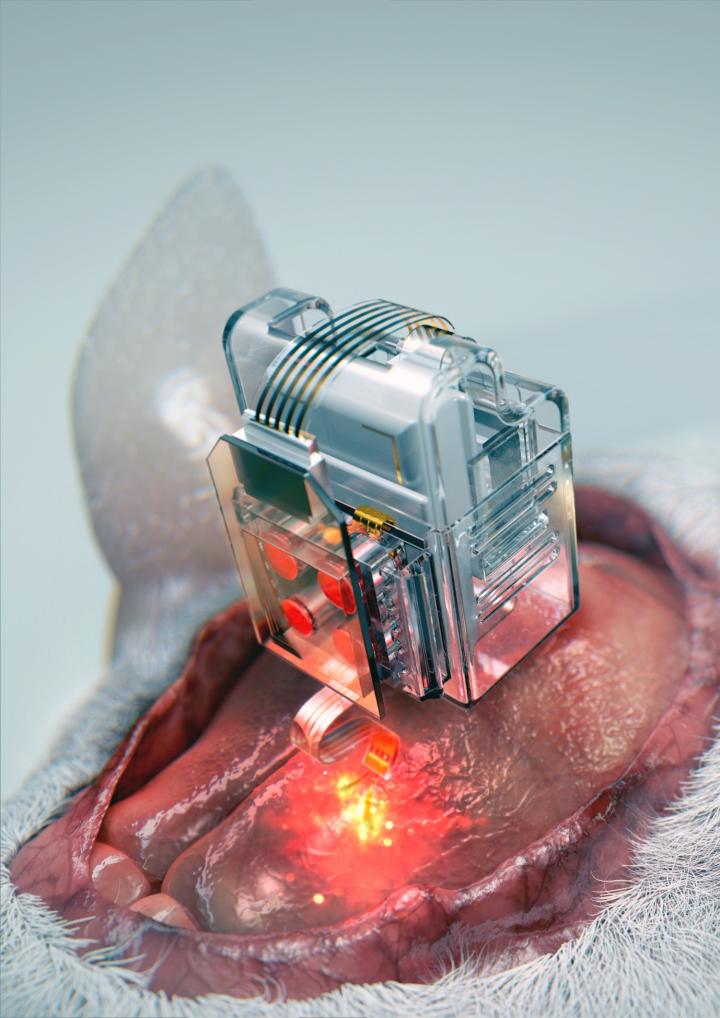 "The wireless neural device enables chronic chemical and optical neuromodulation that has never been achieved before," said lead author Raza Qazi, a researcher with the Korea Advanced Institute of Science and Technology (KAIST) and University of Colorado Boulder.

Qazi said this technology significantly overshadows conventional methods used by neuroscientists, which usually involve rigid metal tubes and optical fibers to deliver drugs and light. Apart from limiting the subject's movement due to the physical connections with bulky equipment, their relatively rigid structure causes lesion in soft brain tissue over time, therefore making them not suitable for long-term implantation. Though some efforts have been put to partly mitigate adverse tissue response by incorporating soft probes and wireless platforms, the previous solutions were limited by their inability to deliver drugs for long periods of time as well as their bulky and complex control setups.

To achieve chronic wireless drug delivery, scientists had to solve the critical challenge of exhaustion and evaporation of drugs. Researchers from the Korea Advanced Institute of Science and Technology and the University of Washington in Seattle collaborated to invent a neural device with a replaceable drug cartridge, which could allow neuroscientists to study the same brain circuits for several months without worrying about running out of drugs.

These 'plug-n-play' drug cartridges were assembled into a brain implant for mice with a soft and ultrathin probe (thickness of a human hair), which consisted of microfluidic channels and tiny LEDs (smaller than a grain of salt), for unlimited drug doses and light delivery.

Controlled with an elegant and simple user interface on a smartphone, neuroscientists can easily trigger any specific combination or precise sequencing of light and drug deliveries in any implanted target animal without need to be physically inside the laboratory. Using these wireless neural devices, researchers could also easily setup fully automated animal studies where behaviour of one animal could positively or negatively affect behaviour in other animals by conditional triggering of light and/or drug delivery.

"This revolutionary device is the fruit of advanced electronics design and powerful micro and nanoscale engineering," said Jae-Woong Jeong, a professor of electrical engineering at KAIST. "We are interested in further developing this technology to make a brain implant for clinical applications."

Michael Bruchas, a professor of anesthesiology and pain medicine and pharmacology at the University of Washington School of Medicine, said this technology will help researchers in many ways.

"It allows us to better dissect the neural circuit basis of behaviour, and how specific neuromodulators in the brain tune behaviour in various ways," he said. "We are also eager to use the device for complex pharmacological studies, which could help us develop new therapeutics for pain, addiction, and emotional disorders."

The researchers at the Jeong group at KAIST develop soft electronics for wearable and implantable devices, and the neuroscientists at the Bruchas lab at the University of Washington study brain circuits that control stress, depression, addiction, pain and other neuropsychiatric disorders. This global collaborative effort among engineers and neuroscientists over a period of three consecutive years and tens of design iterations led to the successful validation of this powerful brain implant in freely moving mice, which researchers believe can truly speed up the uncovering of brain and its diseases.